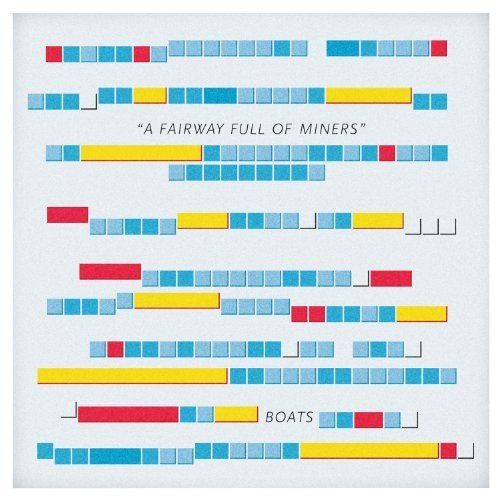 Attention spans, huh? Boring! There’s a certain type of indiepop collective that sees fit to adopt a ‘kitchen sink’ approach to instrumentation and arrangement, as likely to draw from the cutesiest of fey pop as it is to draw from what The Waterboys dubbed ‘the big music’. You know the types: Bearsuit. Architecture in Helsinki. Los Campesinos! Bands who’ll veer from lo-fi jauntiness to mini-Arcade Fires to nonsensical electro within the space of a single verse.

To that list you can add Kill Rock Stars’ own Boats, a five-piece from Winnipeg with more ideas than is really fair. Like the aforementioned acts, their capacity for concentration is small. They’d rather drag songs backwards through hedges than bother with anything as deathly dull as revisiting a verse or chorus. An odd bunch? First impressions of third LP A Fairway Full Of Miners suggest that’s the case.

Much of this is down to head honcho Mat Klachefsky’s frankly bizarre voice – a strangulated, high-pitched yap that scratches eardrums like Wallace Shawn ingesting helium as a cure for laryngitis. Opening toe-tapper ‘Animated GIFs’ sees him wistfully advising us to “never ever change your font size,” shortly before a demented breakdown proclaims: “O frothy eater of sandwiches! Laminated hands will command you!” In short, it’s a little difficult to get a handle on his subject matter, although there’s an engaging quality to his delivery that makes him worth sticking with.

The rest of the band work more cohesively, applying mob shouts and sunny pop ‘oohs’ to the ADD-riddled backing. A chest-swelling trumpet line props up ‘Great Skulls’, while knackered old synths power the scrupulous power-chug of ‘Sad Legs’, and ‘Advice On Bioluminescent Bears’ features the soft tones of the glockenspiel – the indiepoppers’ traditional weapon of choice. Meanwhile climaxes and codas appear from nowhere, allowing individual tracks to flow powerfully and endearingly into realms that seem far from their starting points.

The dense attack of their melodies make for a somewhat heady brew – a little too rich to fully absorb on first listen, perhaps – and for all the expansive nature of their songs, Boats are far from genre-hoppers: it all sounds most assuredly like indie. But then again, they’re never going to be world-beaters; the only thing they seek to dominate is the madcap universe inside their collective imagination. And there they sit: rulers of all they survey. Oligarchs of delightfully batshit guitar pop. It’s worth paying ‘em a visit.