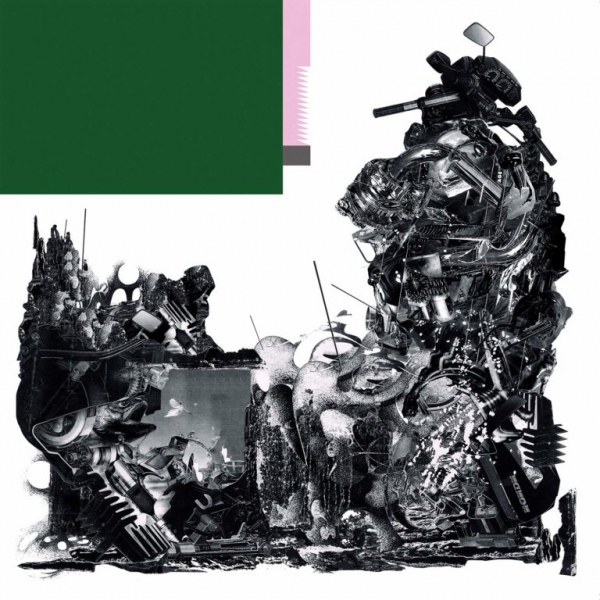 “Talking Heads”, the song by black midi, doesn’t sound a great deal like Talking Heads. You might hear Minutemen, Devo or even Primus, but evidently the band heard something that they thought was like Talking Heads, and a track name was born. That’s pretty much how these annoying, contrary youngsters like to go about their entire business.

What’s in a name, anyway? The Talking Heads picked the most arbitrary, semiotically redundant thing they could think of when naming themselves, and it’s apparent that tradition has continued, as the titles of the songs on black midi’s new album are officially ‘embargoed’ until the album is released. It makes sense, because track titles are mostly pointless, but title them they have, and reveal them we shall not.

black midi is made up of Geordie Greep (vocals/guitar), Matt Kwasniewski-Kelvin (vocals/guitar), Cameron Picton (vocals/bass), and Morgan Simpson (drums, and the band’s not-so-secret weapon). They met, apparently, at the BRIT School, where some famous folk went. Of course, black midi sound not a great deal like Adele or Amy Winehouse or Jessie J or any of the other music-makers that attended the school. Their closest musical sibling from the school is probably King Krule, but even that’s a bit of a stretch.

On first listening to the band’s semi-improvised, wholly ridiculous approach to music, it’s clear that these are either genii at work, or you’re being had. The first song is a combination of ugly funk metal, oddball math-rock and skronking post-punk delivered with a sense of ardour that might convince you they’re entirely serious. Then again, it might not. The vocals are, frankly, batshit crazy... If Adrian Belew and was locked up in Arkham Asylum for a couple of years, he might sound as unhinged as the vocals here.

The second track is much closer to the sound of the Talking Heads than their “Talking Heads” song. It’s reminiscent of that band’s mutant-funk approach on Remain in Light and Fear of Music, and just as oppressive. The third tune, named after a genre of music, is (unsurprisingly) another red herring. There’s nothing remotely related to found inside – in fact, the incessant rhythmic propulsion and overbearing instrumentation mean that the song is probably closer in genetics to drum ‘n’ bass or jungle.

The fourth, and shortest, track on the album is also one of the most progressive. There are shades of Can, Sonic Youth and Pixies – but nothing more than a taste crosses your tongue, and it doesn’t stay for long. The longest song follows, and at eight minutes, it takes its sweet time. For the first four minutes or so, the track title actually fits. It's a Gun Club-esque roll through some kind of post-apocalyptic prairie for four heavenly minutes, until an unbelievably potent groove kicks in, drives towards a mind-melting crescendo, then disappears, before we are left with a reprise of the initial country ballad.

The frenetic title track, which is followed here by the previously-released single “bmbmbm”, reveal black midi to be at least somewhat familiar with how much Primus absolutely suck (look it up.) The two songs that close the album exhibit their schizoid mindset. Track 8 is Beefheart-flavoured, Track 9 is all about the rhythmic intesity the band can conjure, and how they can flip rhythms on a dime. And of course the album ends on a bewildering blast of furious noise and demented yowls. By the time you actually get to the end, you may want to flip the thing over and restart the journey, or you may never want to hear it again in your life. That's your prerogative.

Throughout this whole thing, there’s a revolutionary, anarchic spirit that you may have experienced elsewhere in countless legendary bands (This Heat, Pere Ubu, The Fall et al), but black midi do not pay homage to those bands, or hold them in any kind of esteem. In fact, the feeling throughout the album is one of wilful ignorance of rules, musical lineage and antecedents. black midi are playful, silly, provocative and aggressive, all while maintaining a free-spirited, lackadaisical air that becomes further entwined into their narrative by their reliance on improvisatory passages and jamming. The coincidental similarities in sound are, if anything, a problem that black midi seek to annihilate in some way or another.

Put simply, not a lot about black midi makes sense in isolation, as ‘sense’ is an idea they toy with, scramble and reconfigure into the air of mystery that runs throughout the entire project. If bands like Can or The Residents or Public Image Ltd only existed on paper, you would imagine that they’d sound a lot like black midi (and vice versa), but it is only through direct experience with the songs that make up this exceptional album that we realise that there are some things (including track names) that are best left unsaid, virginally awaiting the experience of the listener.

And with that, there’s just nothing more to say. Listen or don’t, black midi will happen either way.