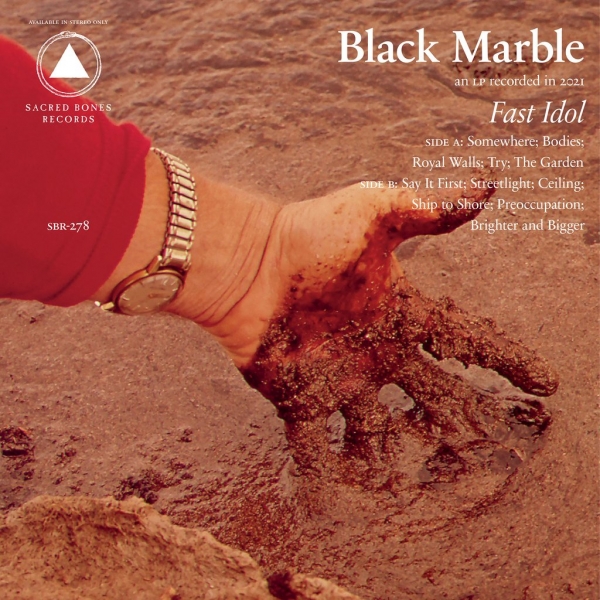 When the world continues to swim in its depravity, the familiar becomes comforting and even inspiring. Enter Black Marble and their yearnful new record, Fast Idol.

Though steeped in dated niceties of '80s production aesthetics, brandished by yesteryear's minimal synth and cold wave movements, Black Marble remains timeless, refreshing, and oddly exciting. Sure, Stewart's music, to virgin ears at least, doesn't stray far from adjacent acts like Drab Majesty, Choir Boy, or even those on the more ethereal end of the synth-pop spectrum like Wild Nothing. But deeper and dedicated listening proves Black Marble a cut above the rest, with far more emotional depth and nuance than individuals fail to recognize.

On Fast Idol, Stewart once again offers a perfectly poignant distillation of danceable, downbeat synth music. However, he recontextualizes the retro and relic with a language that speaks into the anxieties coaxed by a rapidly changing world, a language many of his contemporaries, continually drowning in the past, fail to comprehend. This language, composed of yearnful prose, soul-cleansing melodies, and arpeggiated cadence, embraces isolation and darkness but fills hollowness with subtle warmth, the importance of dreams, memory, and the comfort that arises from the unspoken understanding of an inevitable we all share—death and the questions it leaves unanswered.

Fast Idol is undeniably shrouded in doubt and ambiguity, but instead of trying to find concrete answers to personal problems and those of the world, Stewart sits through the muck and sprouts beautiful new life, transient sounds, and reverberating poetic turns that make it ok and even encouraging to confront our million miles per hour culture. On the racing, drum-forward track "Say It First," for example, Stewart sifts through layers upon layers of rolling percussion, longing guitar riffs, and frolicking synthesizers to wade the waters of his own insatiability: "Every time I walk or run no destination that I want / Farther on now you're questioning, when you settle down, what is discussed? / Farther on now you're questioning, is it all chiffon or deed of trust?" He continues to brave this desire through pained-longing heard on the "The Garden." An off-kilter dirge to its core, here, Stewart relegates his voice to an echoey plea, kept alive merely by the slow pulse of his dimming drum machine, confessing, "I don’t know what I want, but I know where it’s found."

In all of its uncertainty, Fast Idol reaches cathartic clarity during its self-deemed backbone, "Preoccupation," by posing listeners with the very general but resounding question, "What is on the way?" With wistful vocals, despairing synths melodies, and a propulsive bassline, "Preoccupation" sounds like a withering elegy that encounters Stewart with one foot in the past but the other crossed over into the daunting future — life after "us" — life after all of "this." "What is gone? only people and time/ standing tall covered cities and signs," Stewart concedes with strange reassurance. Oddly, there is comfort to be found in this unavoidable reality. We all know, deep inside, "what is on the way" — death — and yet it is still so challenging for many to cherish what was and what is, amidst a world that is so shaky, so unsatisfied, and rapidly changing. Thankfully, Fast Idol reminds us that it is in memories and the past, it is possible to find relief.

It may not be apparent to passerbyers of depressive synth music nor nostalgia purists, but Black Marble is essential. That's hard to admit with any band of this derivative realm, but Stewart continues to breathe life into its cavernous body. He keeps the past alive by presenting familiarity and the mere appreciation of being alive. Black Marble never has, nor will it ever, make music that shatters expectations. But there will always be a need for an artist like Chris Stewart, reminding us with every record, to hold on to a moment — a memory — cherishing them knowing very well it's all we have in the end.