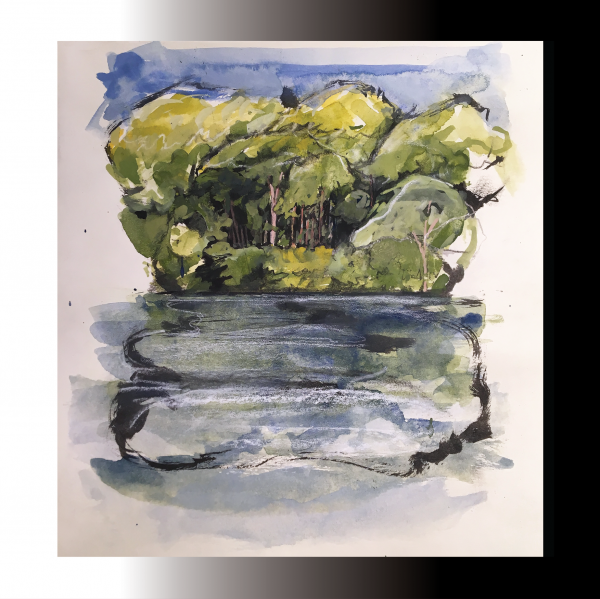 Since releasing their 2014 debut album, Eighteen Hours of Static, Big Ups have wrestled with uncertainty.

Whether it be the religious deceit that was the target of ‘’Wool’’ to the self-deception on ‘’Feathers of Yes’’, the Brooklyn punks have regularly broached topics of scepticism and mistrust. On Two Parts Together, however, they notch that up a gear and delve deeper into paranoia around the unknown.

Vocalist Joe Galarraga explores both the physical and metaphysical via a barrage of evocative analogies and imagery. Employing the lyrical weaving of La Dispute and the explosive nature of Frameworks and Touché Amoré, Galarraga is here at his most intense and fascinating. Dominated by a fear of the unknown, expressed most vividly on ‘’In The Shade’’ and ‘’Fear’’, Galarraga’s preoccupation is mirrored in the real world by repeated references to nature, most prominently that well-known link between us and the otherworldly, the lake.

Sleep and love, two topics that also present a link between realms, are also referenced on more than one occasion. On ‘’Trying To Love’’, Galarraga presents a dynamic where, despite the fact ‘’The lake is steaming/Teeming with what’s breeding’’, there is something that puts up "a small resistance’’ and prevents the love from developing further. The opening to ‘’Fear’’, ‘’I don’t wanna recall/The moments before sleeping/Will I be the same person when I wake up in the morning?’’, reflects a paranoia associated with the unknown and its altering of things in the physical world. A paranoia that symbolises a true coming together of the two.

All of this is hinged on the loud/quiet dynamic Big Ups have perfected over the three records. The trio of Brendan Finn (drums), Amar Lal (guitar), and Carlos Salguero Jr. (bass) are at their most coherent, switching with ease from the furious ‘’PPP’’ to the climatic build-up of ‘’Imaginary Dog Walker’’.

Two Parts Together could be used to reference both dualities present here, that of the physical/metaphysical and the loud/quiet dynamic to Big Ups’ sound. Regardless of which one you choose, the band balance both almost to perfection, presenting both a musical and thematic journey that comes together to create a singular exhilarating experience.