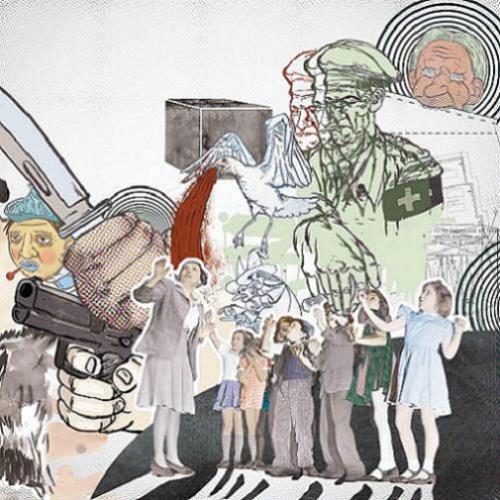 Facts first: Big Dick are a thoroughly noisy duo from Ottawa, Ontario, Canada. That name – may as well throw an “arf!” in here – derives from a song penned by punk stalwarts NoMeansNo. This is their debut album. And that’s the basics for you.

Two-pieces having become less unusual over the past decade, they’re ripe for lazy comparisons (deep breath… Lightning Bolt White Stripes Kills Death From Above 1979 Japandroids PS I Love You blah blah blah). But to do that you’d have to ignore the gnarly rush that focuses their sound and makes them more than merely “two dudes playing rock music”. They’re loud, dense and energetic; treading the well-worn path betwixt impulsive fury and creativity borne outta boredom. Y’know, the one that maps out all your favourite records. Big Dick make noise cuz they gotta, and it shows.

Johnny O’s searing basswork is the star of the show; sure, it’s rhythmic and punchy, but it also loops and spirals away from the instrument’s usual trappings. He plays RIFFS, and great ones too – thunderous beasts that stampede through valleys and crush everything dumb enough to stand in their path. ‘School Yard Violence’ perniciously pummels your favourite Les Savy Fav songs until they’re battered black’n’blue and backed up against the wall, coughing up blood and gasping for mercy. Meanwhile ‘Antisocial’ escorts Jason Loewenstein to a nightclub, feeds him fulla shots until he vomits rainbow-coloured brain cells all over the dancefloor, and then runs off with his best Sebadoh anti-melodies. So yeah, these details amount to “pretty f*cking good”, and that’s without even mentioning the whirlwind sticksmanship of the brilliantly-named Dave Secretary. Solid. Frenetic. Mosh-worthy. Seriously, you want your punk to deliver much more?

There are plenty of other bands who sound like Big Dick out there – they’re masters of a popular craft rather than progenitors of mind-bending originality. But the noise they make is so synapse-snappingly addictive, so brain-thumpingly exciting that it’d be churlish to ignore them. So let’s recap: two dudes. Funny name. Noisy. Awesome. You can win a f*ckload of friends with that sorta formula.