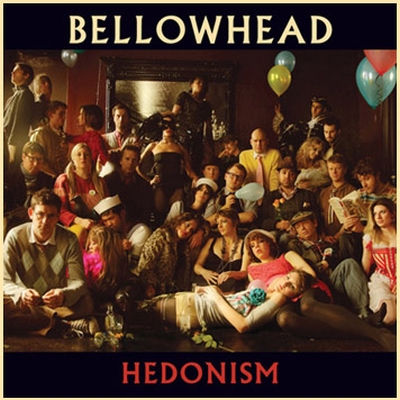 In the ceaseless pursuit of the next big thing and the “best new music”, the music press or what remains of it can be blind to those musicians who still cherish the rich cache of traditional songwriting left to them by the predecessors from ages past. It has taken a rare collection of talents like Bellowhead, then, to wake the cognoscenti to the sheer thrill that can be conjured up by a skilful rearrangement of traditional songs. Now on their third LP, Bellowhead have collected here their most arresting set of songs yet; Hedonism is as excitingly decadent as its title implies, another superb and irrefutable argument in favour of keeping hold of and continually re-engaging with these kinds of songs.

And what songs; beginning with a fantastically stirring rendition of the old American sailor’s song ‘New York Girls’ and voyaging on via English folk ballad ‘Broomfield Hill’ and a version of Jacques Brel’s 1964 song ‘Amsterdam’, Bellowhead’s repertoire is as encyclopaedic as ever. Although the song choice has broadened to the album’s great credit, familiar Bellowhead themes recur – which is to say, that themes of romance and good old fashioned partying mingle with a persistent pitch-black undertone. There is love here, sinister schemes and counter-schemes, dark glamour. Using sprightly, adventurous arrangements adeptly incorporating a huge variety of instruments, Bellowhead have channelled an awesome amount of history-distilled emotion to us from decades and centuries past. Very literally, there is life in these songs.

Looking after vocal duties as ever, Jon Boden is on fine form here, overcoming the archaic language used in much of Hedonism‘s lyrics and managing to focus squarely on the humour and the emotional content of each song. It’s the sheer slickness of the instrumental work which most impresses, however. There’s something fascinating going on in every song. The two instrumentals, ‘Cross-Eyed and Chinless’ and the ‘Parson’s Farewell’ both veer from intricate passages to jaunty sections of brassy euphoria, whilst ‘A-Begging I Will Go’ combines lightning strings, gripping percussion and funk guitar to create something which is, for much of its runtime, an absolute riot.

To think that so many musicians, wielding such a huge variety of instruments, could be coralled into forging such a cohesive, consistently thrilling record is nothing short of staggering. Moreso than ever, Bellowhead have not only succeeded in capturing the energy of their live show but also in reminding us of the wondrous horde of traditional songs we have inherited but too often neglect. Impassioned and polished enough to have the potential to please listeners of many different persuasions, Hedonism is a bona fide triumph and a glorious listen.