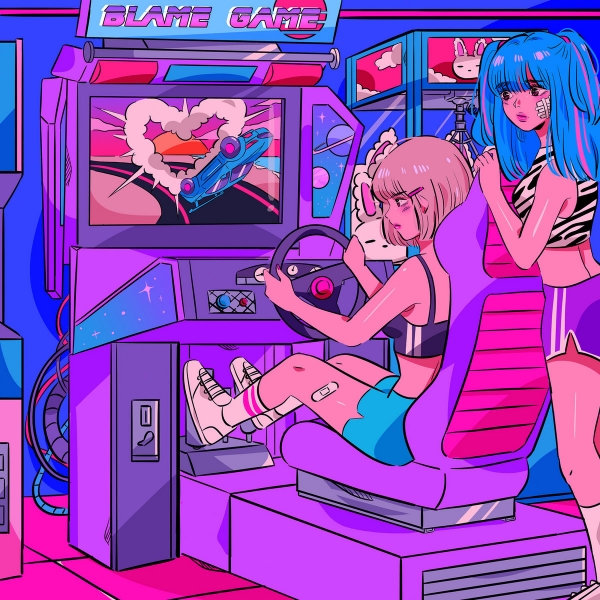 In 2019, Chicago’s Beach Bunny released their debut LP Honeymoon, nine tracks of transatlantic indie rock that even through its quieter moments, felt like a euphoric homage to loves lost and a youth misspent.

Though originally starting life as a bedroom pop project of lead singer Lili Trifilio, it was Honeymoon that saw Beach Bunny blossom; fleshing out Trifilio’s initially understated aesthetic to become the irresistible indie band they are today. If Honeymoon was Beach Bunny finding their feet however, Blame Game is the sound of a band with a bucketload more confidence.

Where their debut was an exploration of the early stages of relationships, Blame Game is less rose-tinted, instead directing its pent-up ire towards toxic masculinity, sexism and the exhausting nature of unreliable relationships. Weighty subject matters given the EP’s modest 13-minute run time, though one Beach Bunny take in their stride.

Wasting little time in establishing the record’s fire-in-the-belly attitude, opening track and single "Good Girls (Don’t Get Used)" is a snotty and sugary call-to-arms, that sticks two fingers up to players and their emotional bullshit, while follow-up "Love Sick" is a little softer, though still manages to retain Trifilio’s trademark sass.

Indeed, on the surface, Blame Game might seem like business as usual for Beach Bunny, but dig deeper, and everything about it feels bigger and bolder. The band’s trademark indie-pop has never felt fuller or seemed more technicolour. Even the scope of the tracks’ various subject matters seems to have grown in direct relationship to the band’s confidence.

And well it might. With Honeymoon Beach Bunny established themselves as both critical darlings and a force to be reckoned with. Blame Game takes everything that made that record so irresistible and amps it up. And though only an EP, it’s the perfect stepping stone between full releases and provides plenty to make the prospect of LP two all the more exciting.