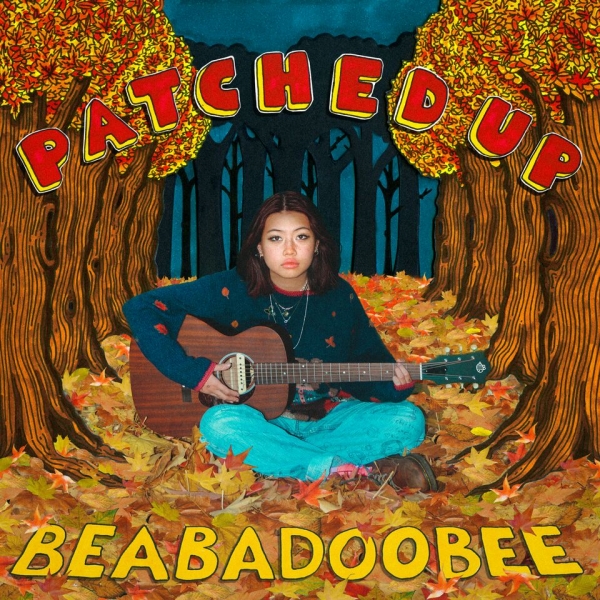 Beautifully hushed, confessional yet timid, it’s like Manila-born Londoner is laid next to you in the dark, telling you things that stay bound between the covers of her diary. Simply put by Beebadoobee herself, Patched Up is “a collection of songs that patch up a history of teenage unhappiness in the lead up to turning 18 years old”. A self-taught guitarist with no formal training to speak of, the bedroom-pop artist stumbled into becoming one of the DIY scene’s most adored talents purely through word of mouth. Here it is: a testament to youth, in all its mess.

"Everest" is a twinkling track, with soaring strings and folk sensibilities. The silk of Beebadoobee’s voice is weighted down by the dark shadow cast by her lyrics: “You’re alright, you’re still breathing / Even though you feel dead sometimes”. Her music is stripped back, her most vulnerable moments marked by nothing more than her own voice and a guitar. "Tired", despite its windchime softness, is a well-concealed feeling of sinking, as she sighs, “I’m getting pretty fucking tired”.

"Dance With Me" is the song for those who don’t know what they’re meant to do at parties, or how to tell that person that you really, really like them. It has feeling of staring down at your shoes in shyness, all the while having that particular brand of magic, with the thrill of a piano, that would fit seamlessly into a Richard Curtis movie.

The authenticity of Patched Up shines through on "Art Class". It reminds you that what you have hear is a scrapbook of collected titbits of adolescence, small fragments that make up a mosaic of moments as she grows up. Though these simpering tales of gazing at her crush in art class might seem a little too rose-tinted to be true, but what she sings is entirely sincere, from a place we’ve all been.

"If You Want To" is the anthem of this EP for all the wrong reasons. By far the most energetic track, pinched guitars build to a riotous bridge as she shouts “Sleep paralysis ‘til I die!”. It’s a confession, laying bare her struggles with mental health, yet put in the most infectious way. It calls to mind her trans-Atlantic counterpart Snail Mail, with the same vibrancy loaded with generous helpings of self-reflected angst.

Beebadoobee is the girl who never grew up, a Neverland-esque lost child. “Don’t wanna be eighteen / When I can’t ride a bike” she sighs on "Eighteen". There’s a sense of desperately holding onto comforts when she knows she needs to let go. We all know it: the liminal place between child-like freedom and adult responsibilities. Beebadoobee dips into celestial synth, which gives ‘Eighteen’ a certain gravitas a force of change.

The EP closes with "The Way I Spoke" that fades in and out with the pattering of rain on a roof. It’s a fragile recount of blossoming love. Patched Up, in many ways, is far more than a title – it’s exactly what this EP is. Beebadoobee, with every vulnerability, patches herself up in her reflection ready to set out on the highs and lows of becoming an adult.