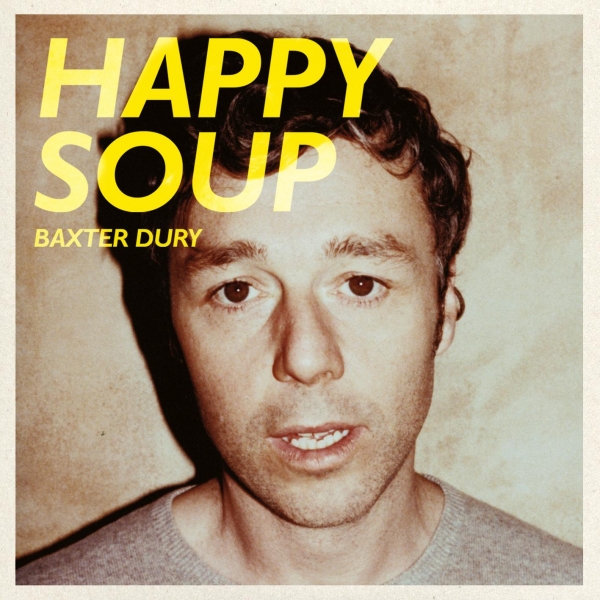 After two near-relentlessly bleak efforts (and a surprising production gig on Slow Club’s debut), Happy Soup is the moment at which a little bit of sunshine infiltrates Baxter Dury‘s unique brand of Cockney miserablism. It’s hardly a laugh a minute, but it seems like a much-needed confidence has started to venture into Dury’s spirit; his vocals are far more foregrounded than on previous efforts, albeit cushioned on almost every track by the kind of smoky wisp of female voices with which Leonard Cohen chooses to surround himself nowadays.

At its peak, Happy Soup reimagines Arab Strap, if they were raised on a diet of Squeeze instead of Slint. The gorgeous ‘Leak at the Disco’ is a wallflower’s monologue which, over a circular guitar line and cheap Casio beats, seems to equate a bad night out with Apocalypse Now (right down to the sampled helicopter noises drifting across the speakers), as Dury mumbles an indifferent goodbye: ”I’m goin’ upstream, I’m definitely goin’ upstream…see ya.” ‘Afternoon’, meanwhile, is one of the few moments where the family resemblance is truly apparent; squelchy analogue synths and a lyrical bassline gives way to a deeply desperate vocal take that would have done his father proud.

In its worst moments, it helps you understand why it was a good idea for Mike Skinner to throw in the towel by age thirty; opening track ‘Isabel’ takes its lads-on-tour theme that bit too far, with cheesy disco beats and an unfortunate chorus about a barely-remembered shag (“I fink my mate slept wiv you when you were in Portugal”), while ‘Picnic on the Edge’ makes a brave but pointless attempt at adding some gloom to ‘Cool for Cats’. As Dury’s first album for a new (major) label, many of its ideas are too sketchy to really stick, yet it’s production is too intricate to suggest the casual, tossed-off charm of some of his peers. The exception is ‘Hotel in Brixton’; it may suffer from erratic recording levels and a helluva lot of inadvertant distortion, but it manages to be completely endearing by sounding like it was made effortlessly, rather than made without effort.The real keeper here, though, is the closing track; ‘Trophies’ is a stately waltz, which provides the album’s most positive message – “You must wake up, breathe and embrace the day” – and Dury’s most sincere singing on the entire record.

If Happy Soup is the result of six years of work, it still manages to sound strangely transitional. While it doesn’t sound like he’s been given too much of a budget upgrade, here’s at least hoping that he translates the positivity he displays on Happy Soup leads to a more productive second phase of his career. He’s long deserved to step out of his father’s shadow, but this isn’t quite the record that’s going to help him make that jump.