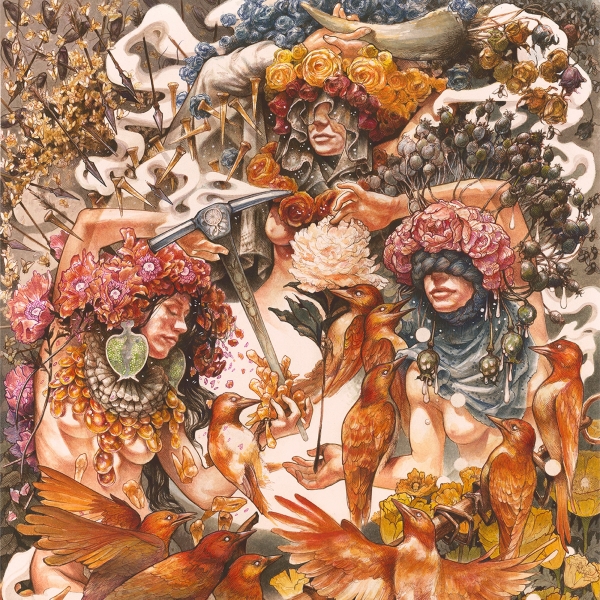 The best heavy metal bands have always been those that push hardest against the confines of the genre, break on through to the other side, and lay the foundations for other bands to build skyward.

Georgia’s finest, Baroness, are one of the finest exponents of heavy metal in the world nowadays (possibly ever, when all’s said and done), because for years, like musical big brothers Mastodon, they have been refining and crafting and sanding and sharpening the ugly strain of metal of their debut into something far more beautiful, pushing back against the more regressive, reclusive qualities of the genre into lush green pastures of opportunity. Where this kind of trajectory usually results in alienation from an audience, Baroness’ audience has grown, organically, to the point where they’re now being nominated for Grammys and finding their albums charting across the world.

That said, your enjoyment of Gold & Grey will largely depend on how heavy you like your metal. Just as you can always judge a Metallica fan on their appreciation of their self-titled 1991 masterpiece, you can always judge a Baroness fan on whether their favourite Baroness record comes before 2012’s Yellow & Green. That album represented a watershed moment for the band, as songwriter, cover artist, singer, guitarist and leader John Baizley began to introduce more overt influences from psychedelic rock, shoegaze, post-punk and indie rock into their once-fearsome sludge metal sound. It was, coincidentally, released two months before a hideous bus crash that could have ended the band for good.

The two albums that preceded Y&G, Red Album and Blue Record, are masterpieces of aggression. They’re consistently furious celebrations of the louder side of life, and will forever stand as monuments to Baroness’ mastery of the craft. On the former, the music was raw, violent and caustic. On the latter, producer John Congleton brought in a more polished (but no less sharp) edge, buffing off the rust of the Red Album and leaving in its place a chrome-plated doppelgänger - more attractive to an outsider, but no less dangerous. Yellow & Green, having opened up previously obscured avenues, allowed for the creation of the fiery indie-metal of 2015’s Purple, which contained “Shock Me”, arguably the closest Baroness have ever got to an “Enter Sandman” moment.

It’s fitting, then, that Gold & Grey represents another mutation, another chapter in the ever-winding story of this mercurial band – it feels, palpably, like the end of something. It’s not just that this album will be the final ‘colour-themed’ Baroness album, it’s something more. It feels like the final movement in a sequence, the final kick of the ball. It feels like checkmate. And it’s all down to the staggering ambition of the songs.

The album opens with “Front Toward Enemy”, which is every bit as defiant as you’d expect. Bassist Nick Jost sounds as though he’s strumming suspension bridge cables, and Baizley’s guitar blends so seamlessly with Gina Gleason’s that it might be sprung from the same divine well. The song rolls, winds and bounces, hyper-progressive yet totally followable.

“I’m Already Gone” opens hinting at thunderous gothic rock, before it mutates into something stranger. Imagine Smashing Pumpkins going into free-fall with Achtung Baby U2, spiralling together at such as speed that they become one and the same. This is ambitious music, but the ambition is matched by flawless execution.

“Seasons” is a showcase for the incredible drumming of Sebastian Thomson. His hyper-speed rhythm never feels like it’s getting away from him or the band, who run through a kaleidoscope of sounds over the four-minute duration of the track. There are monstrous thrash metal riffs, opulent dual-guitar leads and razor-sharp, Cure-esque post-punk squalls – before Thomson unleashes a blast beat out of left field and the song breaks down into a Blue Record sludge crescendo. “Seasons” is an immediate contender for Baroness’ best ever song.

Delicate interlude “Sevens” introduces the muscular mid-tempo stomp of “Tourniquet”. Song that opened like “Sevens” were Purple’s stock-in-trade, but after three minutes and one incredibly emotional guitar solo the song evolves into a looser, heavier beast.

“Anchor’s Lament”, another interlude, introduces “Throw Me An Anchor”. “Throw Me An Anchor” is ear-splitting, headache-inducing garage rock masquerading as progressive. One of the only criticisms ever levelled at Baroness is that the previous album sounded – production- and mixing-wise – ‘abysmal’ (to some ears). While it’s true that their sound is largely brick-walled, and digitally distorted beyond all comprehension at times, this is clearly a stylistic choice made by the band to enhance the intensity of their music. Producer Dave Fridmann does here (as he did on Purple) clearly enjoys sacrificing listeners’ eardrums for a potent, powerful mix and punchy sound. It worked on Purple, it worked on Sleater-Kinney's The Woods and it works here.

“I’d Do Anything” is the ominous feeling of creeping dread made into music. “Blankets of Ash” is post-nuclear ambient. “Emmet-Radiating Light” is cowboy music from the Upside-Down. “Cold Blooded Angels” treads softly and slowly for three minutes, before it shifts into relentless hard rock. “Can Obscura” is a Krautrock-indebted math-rock instrumental. “Borderlines” synthesises space rock and throat-punching metal and embellishes the hybrid with monumental riffage and majestic soloing. Final interlude “Assault on East Falls” introduces the nerve-shredding shoegazer finale of “Pale Sun”, before the record ends with a final howl from Baizley’s tiger-throat.

So what does this mean for the band? The rhythm section is, demonstrably, the best to play for this band. Gleason has been blooded, and her name fits beautifully onto Baroness’ team sheet. Baizley is, as ever, an auteur the likes of which heavy metal has never seen – his cover paintings are the stuff of legend, his voice is as instantly recognisable and inviting as it has ever been. This is a world-class band seemingly ending a chapter, clearing the board and resetting the clocks. This is the sound of a world-class artist, with his world-class band, at once unifying and annihilating his own history, putting a concept on a fire and letting us hear it burn.

P.S. It’s imperative that you know that is album was, is, and will forever be known as Orange. Baizley admitted that this is the orange album, but he’s said he just doesn’t think it sounds as catchy as Gold & Grey. He’s wrong. Orange is better.