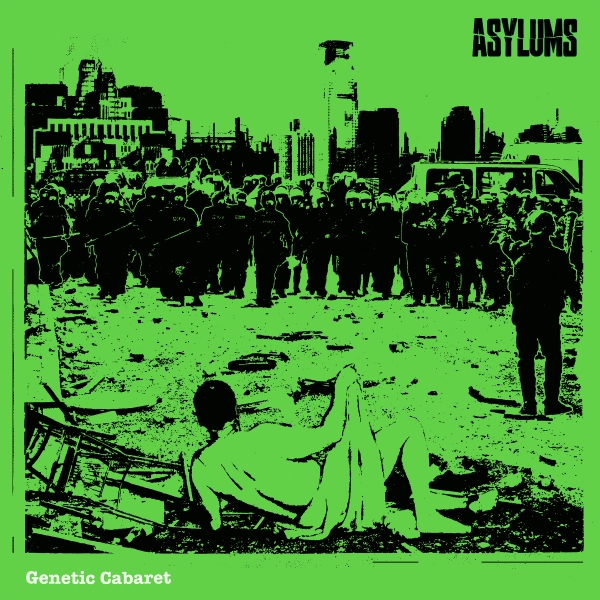 A tenacious assembly of fuzzed up guitar tunes that dismantle feelings of political perplexity and emotional overload; Asylums’ third album Genetic Cabaret is the product of intense personal and social scrutiny.

Conceived in the band’s hometown of Southend on Sea, recorded in Chicago with legendary sound engineer Steve Albini (Nirvana, The Breeders, Shellac), and mastered at London’s iconic Abbey Road Studios; Genetic Cabaret is an energetic, indie-punk showcase that deconstructs apathy whilst ricocheting between resilience and vulnerability.

Whether you’re stuck in “A Town Full Of Boarded Up Windows’ or you’re struggling to keep up with “Adrenaline Culture”; Asylums remind listeners that resistance is not futile. Together, Luke Branch (vocals/guitar), Jazz Miell (guitar), Michael Webster (bass), and Henry Tyler (drums) collectively tackle fears of a dystopian future, falling off the mental health radar, and what it might look like if things did actually work out for once.

On “A Perfect Life In A Perfect World”, Branch notes that “In the court of mass opinion / we preach a prologue instead”, as Miell’s whirling guitars underscore this clash of opinions. It’s a hopeful tune, asking listeners to imagine a better future for themselves and the ones they love, which softens the sharp observations made on “A Town Full Of Boarded Up Windows”, “Clean Money” and “Who Writes Tomorrow's Headlines?”. On these tracks, the band rip through the “shadows” left by neglected towns, directly question the “dirty” antics of the obscenely rich, and interrogate those who write “drafts” for monocultures.

On the eponymous “Genetic Cabaret”, Asylums step into the spotlight as the ringmasters of their dystopian sideshow. Tyler’s off-kilter beats, Miell’s anthemic guitars and Branch’s sardonic vocals are a savage spectacle here. Amidst the chaos though, there are moments of calm. The band collectively slow things down during the tentative first few verses of “The Miracle Age” and again on the stripped back final track, “Dull Days”. Branch’s lyrical delivery is more tender here, providing headspace and a moment to heal on a “bad day”.

Listening to Genetic Cabaret simultaneously feels like a sharp scratch across an old scar, and an aural antidote to feeling abandoned in a world that rarely makes any sense. It’s an eruption of distorted riffs, simmering bass lines and thumping beats fueled by a desire to convalesce outside of the chaos, and for the duration of the album, that’s what the band confidently achieve.