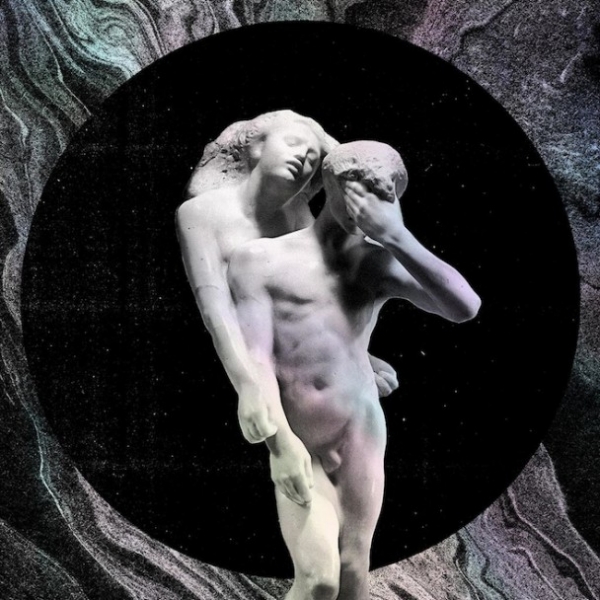 “Do you like rock and roll music?/Cause I don’t know if I do”.

It’s a seemingly improvised aside, delivered by Win Butler in the mode of dive bar house act, as he casually riffs over the sound of the band slowly whirring into life. But this off-the-cuff, tuneless hum cuts deep. Via tacky Canadian salsa bars, cryptic graffiti scrawls, surrealist half hour takeovers of primetime American television, high-quality interactive concept videos, and the vociferously consumed avalanche of tidbits causing a continual crescendo of online anticipation, Arcade Fire have proved themselves to be toying tricksters, operating on the highest echelon of alternative celebrity. On Here Comes The Night Time, the short film they made to accompany the record’s introduction, Michael Cera conducts lengthy conversations about Michael Buble in Spanish and absurdist lectures on chess, whilst Bono’s cameo clocks in at roughly two seconds. The compere for their recent CMJ show was none other than James Murphy, right before the band punked the crowd by switching stages. David Bowie? He’s on backing vocals. Their Grammy’s probably sitting in the corner covered in silly string, half-full of mead from last night’s drinking games.

In a whirlwind of white suits and glitter sits the tightly guarded spark inspiring this proliferating sense of mystery – Reflektor – the curiously named record painstakingly engineered as reinvigorated curveball. But bar the itching, brass-tinged alt-disco stomp of the lead singles and the band’s new wardrobe, the album is still characterised by what we don’t know about it, rather than what we do. Even the record’s marketed aesthetic breeds the jarring indecision of this lyric – ranging from high art sculpture, and its allusion to Greek mythology, to the cross-hatched graffiti diamond sprayed in the world’s dingy alleyways.

I have not had the opportunity to experience this record on the park benches, subdued commutes, Saturday nights and Sunday mornings through which their previous record, The Suburbs, so effectively weaned its way into my conscious, with its quiet grandeur and poignant meditation on disillusioned human experience. Intense bonding sessions in darkened rooms with only cut-glass tumblers and leopard print cushions for company make Reflektor only an acquaintance, and the shortcomings associated with never quite knowing whether it’s going to punch you square in the jaw, or lead you freewheeling onto the dancefloor, inevitably mean that this impression is only an early one.

But one thing that is beyond doubt is that in the sonic vacuum at the core of this expectant virtual storm sits the thrilling results of these innovators dancing to two competing rhythms – the alluring, seductive mystery of the dancefloor, and the human heart beat that throbs so furiously at the centre of their greatest moments. Their redemptive ability to touch all nooks of the emotional spectrum with a rollicking urgency comes super-charged by the aforementioned input of Murphy on production duty, energising the affective potential of Arcade Fire’s quiet grandeur with the modernity of his pulsing production and groove kudos.

It’s a dense kaleidoscope, jam-packed with generic shift, which on the whole rejects easy sonic linearity to texturally evoke the transient, visceral experience of living on the boundaries of modern life. However, the broad lines it does draw are along these lines – replacing old-world instrumentation with treated sounds and warm synths from Murphy’s hard drive, and baroque beauty for a bold rhythmic focus – only sometimes specifically dance-orientated – to revel in its ability to chop, change and strut at a moment’s notice. As bonkers as it is brave, this sprawling vessel represents as big a sonic reinvigoration as could be expected at the level occupied by the biggest bands in the world – and only possible for a group still too hungry to conform, and tightly wound to settle down. From the video for “Afterlife”, which overdubs the song’s lyrics in kooky font over the 1959 film Black Orpheus, which re-sets the story of Orpheus and Eurydice in the Brazilian favela, to the band’s own references to the same myth in the record’s album cover and song titles, Arcade Fire consciously cite, and re-enact the act of appropriation and re-location. From the influence of the band’s (re)formative time spent in the rhythms of Haiti (the band’s already extensive cast now features Haitian percussionists), to spending a few nights out past their curfew, Reflektor acts as a vehicle through which the band’s established flair can be refracted into a new polarising, pulverising shape.

For the informed and inquisitive, the seeds were there. From the dichotomy physicalised on the vinyl released preceding The Suburbs, where the grubby fisted garage punk fizz of “Month of May” jarred with the meditative honesty of the record’s title track, to the electronic highlights of the last record, in the shape of buoyant anthems “Sprawl II (Mountains Beyond Mountains)” and “Half Light I”, Arcade Fire have never been easy to pigeonhole. It’s more than just the Roman numerals that the band have replaced with a different template, however – largely leaving Bruce Springsteen-indebted, slow-blooming, amped-up meditation behind for Reflektor’s cornucopia of influence – from the gloomy dub chamber of “Flashbulb Eyes”, to the gritty hardcore punk that opens the glam rock stomp of “Joan of Arc”, via the “Billie Jean” bassline of “We Exist” and the Beatles-esque campfire chant-a-long that closes “Awful Sound”. “Here Comes The Night Time” revolves around a shamelessly irresistible piano hook, shifting from frantic surf guitar and Haitian drum rhythms to its reggaeton-tinged strut. “Normal Person” erupts with its full-on, power chord riot of a chorus, whilst a clip from the Jonathan Ross show introduces the glistening reverb of the straighter, pop-tinged new wave of “You Already Know”. The most obvious touchstones are the arty itch of Talking Heads, or the synthesised melancholy of New Order, but the width of influence is honed for maximum breadth, rather than lowest common denominator. Whether it’s Regine voicing 15th century French heroines via a warped vocoder (although her all-too-brief cameos expose her frequent absence), or the recorded applause that bookends the first disc’s mid-point, the mania of the first disc’s world is tight and furious – with Murphy’s influence smeared indelibly over its blueprints – and mixed for maximum thump from the lower frequencies.

But if Reflektor’s most direct hits reside in its first half, then its most lasting might hide out in its (marginally) more contemplative second. Although the inevitable over-indulgence in a 75+ minute double record can be found here – the most dangerous thing about “Porno” is its title, and the six minute ambient outro to “Supersymmetry” sounds like someone forgot to hit stop before trundling out to the salsatheque – in “Awful Sound (Oh, Eurydice)”, “It’s Never Over (Oh Orpheus)” and “Afterlife”, the band reach career summits. The first opens with a persistent, tinnitus-esque rhythm, perhaps displaying a wicked witty humour to the band’s duality in the context of its title, before flourishing with gleeful bombast into something that ends up somewhere near “Hey Jude”. “It’s Never Over” inherits a classic Murphy rhythm, and his knack for dark post-punk tension, before retracting into a beautiful, vulnerable middle section. With the beat continuing to throb in the shadows, Butler’s tender vocal feels like the first breath of fresh air outside a claustrophobic party, before breathless lifting off with light-footed air into the quiet, starred night. And in the ashes of the record’s dark night, “Afterlife” shines as the unifying, totally infectious anthem rising with the light.

These moments might provide solace for the die-hard Funeral devotees. But for the most part, Reflektor forges its own hall of mirrors, filling the private prisons, empty rooms and half-lives that populated the reflective depthlessness of The Suburbs with vibrant life and kicking k’s. Transposing themselves to taking on the extremities and duality of the public mask, found in the club and the limelight, the band find a new comfort. From the oppressive eyes of the camera’s flashbulbs, to finding love on the stage – the record is made both in the perspective of its own celebrity, with an awareness of its own expectation, and with the constant feeling that they couldn’t care less. With ironic playfulness, this two-footed dive down the rabbit hole echoes the introduction of the rejuvenated spirit of their guise as The Reflektors, from the cautionary disclaimer of “Reflektor” (“See you on the other side”) to the greeting of “Normal Person” (“How do you do?”). If The Suburbs gave us solidarity in our little agonies, then this follow-up gives us a delusional cult to follow into the darkness. Now they’re ready to start.

Reflektor is out Monday on Merge.