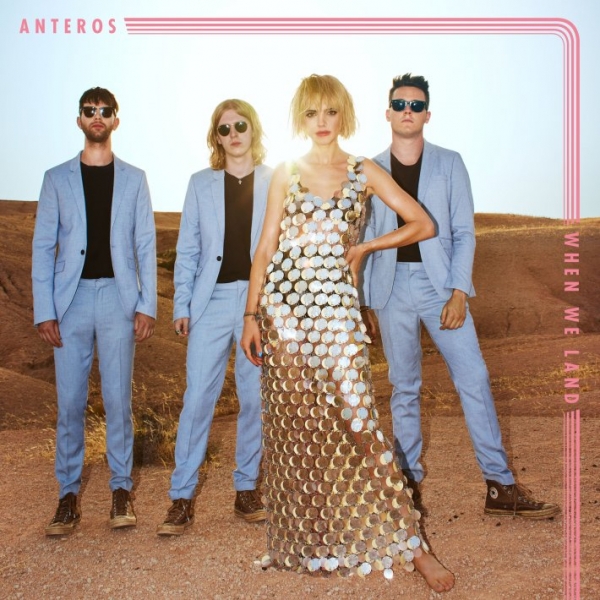 It’s been a long time coming for Anteros, but it seems like the four-piece have finally arrived.

When We Land is an impressive debut, one which matches the bold, stomping and unapologetic energy of the band behind it. Frontwoman Laura Hayden’s vocal tone is reminiscent of Debbie Harry on Blondie’s Parallel Lines and Eat To The Beat – particularly on opening tracks “Call Your Mother” and “Ring Ring”.

A wide range of influences shine through songs across the album – the echoing vocals of “Afterglow” has a HAIM-esque quality, and stunning, soulful “Let It Out” exudes Fleetwood Mac vibes. But it’s all distinctly their own, too, because Anteros exist in their own realm, drawing inspiration from right across time and space – there’s the gritty-yet-sunny indie pop of the late '00s on “Breakfast”, '70s disco pop in “Wrong Side”, and yet songs such as “Ordinary Girl” and “Fool Moon” have a very modern feel to them.

What ties it all together is the dreamlike synths, Hayden’s diverse and unique vocals, and the coupling of thought-provoking lyrics with impossibly catchy choruses. The tempo of the chorus to “Honey” inspires dancing, whilst its words explore a toxic relationship, feeling trapped and incapable of walking away. It is only in “Let It Out” that the tempo drops momentarily, and a soaring vulnerability is revealed. It is the emotional core of the album, Hayden singing “let it out, I don’t need to pretend” as imploring as she is affirming of herself – until the very end of the song when she gains strength and conviction.

The eponymous track, “Anteros”, makes a fitting closer for the band’s debut album. “Could this be the first part of the last start?” is repeated over and over, but it’s hopeful rather than unsure. They sound like a band who already know the answer.