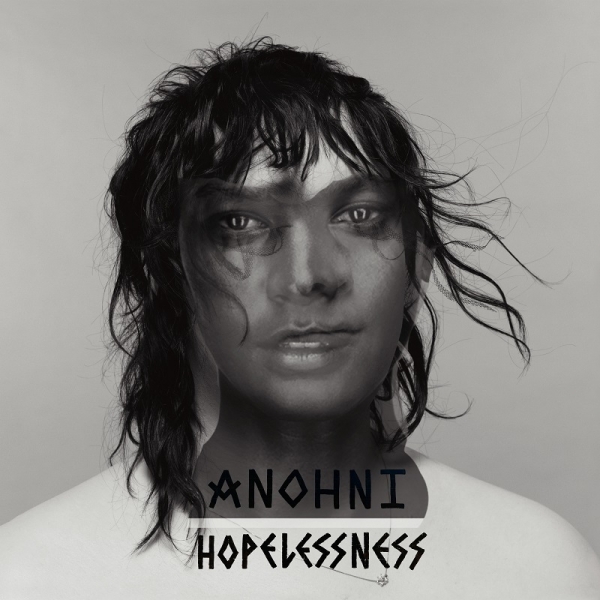 ANOHNI’s Hopelessness is a protest album for the drone dystopia. It serves as both a heartfelt apology for the brutally oppressive actions of our warmongering world leaders, and a prayer that we collectively find a way to heal wounds from the ravages of contemporary life before it’s too late to save us all.

The one-time leader of Antony and the Johnsons has partnered with Oneohtrix Point Never and Hudson Mohawke for her debut album as ANOHNI, which strikes a fluid balance between the fragile emotions and defiant social commentary of her lyrics alongside the intoxicating beats and fresh grooves of her creative cohorts. But rather than coming across as a finger wagging, holier-than-thou scold, Anohni openly contemplates her own complicity for the ills plaguing our society, and the responsibility we all share in changing our ways.

It’s a grief-stricken record, but far from a defeated one. For there is hope and salvation to be found in the world as well as these songs – regardless of the despairing album title – we just have to work a lot harder for it than we have in the past. And rather than restricting access to those same dreams and aspirations in those less fortunate or unfamiliar to us, Anohni illuminates the need to embrace the causes of others in order to more fully identify with ourselves.

Throughout Hopelessness, Anohni reveals multiple layers to the stories within her songs, and that the deeper you dig beyond the headlines and easily digestible sound bites, the more pain and deception you are likely to find. “I have a glint in my eye,” Anohni sings wistfully on the powerful lead off track, “Drone Bomb Me,” before crushing us with the following line, “Like I wanna die.” The song is written from the tragic perspective of a young Afghani girl who lost her family in a drone bomb attack and wishes to die herself to escape the pain of living alone without them. The record continually deals with the struggle between resigning yourself to desolation in order to shelter you from the anguish brought on by your surroundings, versus the desire for a deep connection with others in order to feel less alone and allow your wounds to mend.

“Watch Me” expresses a desire for a guardian angel to protect someone from the evils of the world, before switching the perspective to someone who is an active participant in those same depravities yet seeks salvation anyway. The track is an open indictment of us all, as we are culpable in adding to the corruption of our culture, whether we do so knowingly or not. There is a collective guilt involved in standing idly by while the world fractures all around us, and Anohni is conflicted by that sense of shame and responsibility throughout this record.

“Obama” is a minimalist, spoken-word tone poem that is harshly critical of the American President for failing to live up to the impossibly high expectations of an electorate blinded by his promise of hope and change. It also serves as an elegiac condemnation of any and all political leaders who have ruthlessly tilted the world towards war and deception to suit their own selfish means.

On “Why Did You Separate Me From The Earth,” Anohni expresses a desire to retreat from the horrors of the modern day by retreating to a simpler time: “I don’t want your future / And I’ll never return / I’ll be born into the past / I’m never, never coming home.” And while that plan is quaint and desirable to all of us who have grown weary of the wicked ways of man, it’s not practical or possible to be born in a different age, and we must eventually confront the ills of our own era head on in order to protect the earth for the future.

Hopelessness essentially represents the fight to find your own unique place in a world that has grown ugly, and a sincere desire for us all to wake up and take action to ensure it doesn’t get any uglier than it already is.