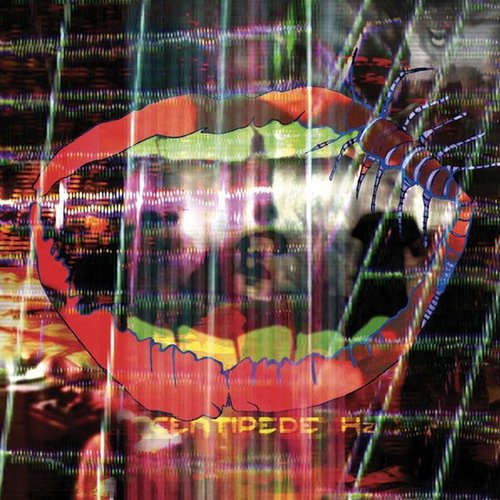 How do you solve a problem like Merriweather Post Pavilion? Animal Collective’s last LP was such a zeitgeist-capturing, era-defining moment in the past few decades of alternative music that whatever they were to follow it with was always doomed to suffer by comparison. Seemingly all of the talk about its long awaited successor Centipede Hz has revolved not around what it may or may not sound like, but instead the need to place it in some sort of discographical hierarchy – simply, is it as good as Merriweather?

But mate, thinking like will only lead to a life of misery and a lonely death. What AC have done is to take a leaf out of the Radiohead book and consolidate rather than further their position as simultaneously one of the world’s most forward thinking and straight-up enjoyable bands, content in the knowledge that their peers are still playing catch up. Centipede Hz might not bear much sonic resemblance to its luscious predecessor, it might not come to define a time or sell as many copies, but it’s yet another excellent record from a band who are idiots on the subject of how to make a bad one.

Its defining feature is just how busy everything sounds. Centipede really doesn’t sound like a band getting older; from the joyous thuds and bubbling synth swirls of opener ‘Moonjock’ onwards, it’s clear they still hit every instrument with the glee of a child attacking a frying pan with a wooden spoon. It’s an excellent scene-setter of a first song, with so much happening to it at once – from multi-part, yelped choruses to delicately interlocking riffs and a closing ambient passage resembling what you imagine a kid in the sixties thought was the sound of deep space – that the rest of the record seems to know exactly what to do, that being to explore each of its facets in further depth, and see where they go.

And they go everywhere. Much of Centipede Hz takes a while to stick in the brain because there’s simply so much going on at any one point that it can be hard, at first, to focus. Those thrown slightly when bonkers lead track ‘Today’s Supernatural’ reared its head a few weeks back will find it clicks perfectly when sat within its parent album, the full force of its curious attack being felt only when it’s set amidst a host of songs right on hand to give it ample reinforcement. It’s a forceful record – other than the comparatively pared back ‘Rosie Oh’ and almost calypso vibe of the penultimate ‘Pulleys’ there’s not a lot of space here, few moments of restraint or pauses for thought; doing other things whilst listening to it requires a level of concentration that’s not really worth the effort. But “background music” is the worst genre of all, right?

That’s not to say that they’re paying any less attention to melody, with the double header of the nursery rhyme charm of ‘Applesauce’ and contorting, lilting croon of ‘Wide Eyed’ proving that the band are still as concerned with tunes as they are with dissonance. But as with all their best work, Centipede Hz claims its greatest successes when it’s toying with both simultaneously; ‘Monkey Riches’ is a personal highlight, the kind of song where I both want to learn exactly how they programmed all those weird squeaks and bursts of percussion and closely study every lyric so I can bellow along with as much happiness as the band seem to be channelling in that excellent chorus. The best lyric I can make out amidst the almost canine yapping of it so far – “makes me even wonder how I wrote this song – does it not occur to almost everyone?” – simply must be the band being unnecessarily modest. Songs like this only occur to Animal Collective.

Its preference for very hectic songs over displaying this band’s underused talent for sparseness is perhaps the one (very mild) disappointment to Centipede HZ, but being so densely packed could work in its favour in the long run – like returning to episodes of Brass Eye, I think there will be things to it that I won’t notice for years; favourite tracks, lyrics and atonal sections of fizzing noises being all, thrillingly, subject to change. It might take some time for many to consider it their favourite Animal Collective album. But that day will arrive, and those who come to love it will do so as passionately as they have any of their previous works.