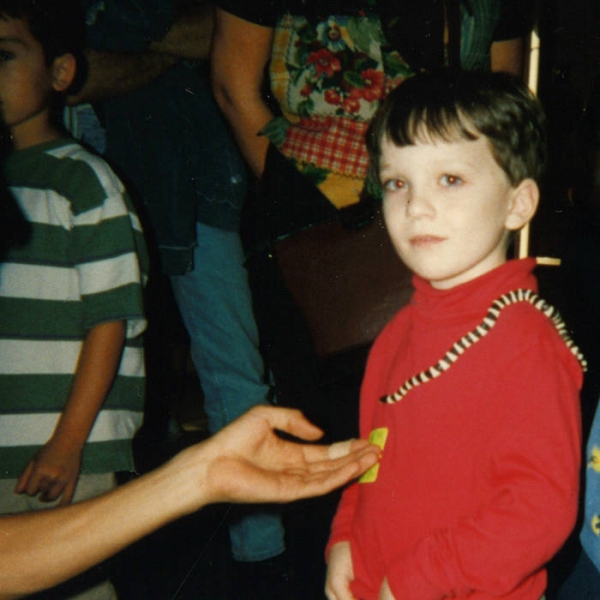 Angelo De Augustine found his world turned upside down shortly before Christmas 2017, when a simple letter signalled the end of an intense relationship. His third album Tomb, is the reactionary document of that heartbreak. Written in the immediate aftermath of this event, over the course of just a few days, it is a catalogue of bruised pages that expands to capture a life’s worth of let downs and regrets.

De Augustine’s first two records were home recorded in his bathtub on a reel to reel tape recorder. That approach brought its own lo-fi, soft focused charm, where moments of beauty swirled without ever settling. On Tomb the veil of secrecy surrounding his previous work slowly begins to recede, as a more confident voice emerges, shaking loose any notions of timidity. The intimacy remains intact, it’s just that now a sharper focus has been given to his song craft.

This newly found confidence has perhaps been teased from him by producer Thomas Bartlett (a.k.a. Doveman) with whom he recorded the album in a studio setting for the first time. Bartlett’s nuanced touch can be felt throughout the record as he contributes additional instrumentation, subtly propping up De Augustine’s delicate arrangements.

Tomb is not the first, nor will it be the last album about a broken heart. For many it may also draw to mind another record they hold close, not necessarily in sound but the way in which the personal delivery seems to reduce the proximity of the listener and performer. Its creator decamped to the woods when his life was turned upside down, and returned with For Emma, Forever Ago. Yet Tomb, though filled with sad moments, is altogether more hopeful; quivering with a fragility that refuses to break.

“Time”, the albums lead single, is a perfect song in its own right. The knocking plod of muted piano trips over tremors of synth while De Augustine’s fainted vocals and timeless whistled melody etch amongst the stars. However it is “Time’s” context within the record as a whole that makes it so special. It acts as the resolute backbone of hope; a composition that somehow manages to unlock the beauty and intricacies of the rest of the album. Whether that be on the half dreamt folk of “You Needed Love, I Needed You” where De Augustine is trapped by feeling too deeply (“I don't have a car, to drive around in, I just have a heart, that I walk about in”), or the time shifting bounce of “All To The Wind”, with its jaunty piano and lulling vocals that hark back to a rose tinted ‘60s.

If the core of the album could be aligned with the whispered double tracked tones of Elliot Smith, “I Could Be Wrong” is a markedly different creature. Coming in like The Postal Service dialled down a few notches its programmed drums, synth blips and wandering Mellotron crest a sun soaked wave as De Augustine fears he may never get over his loss (“I could be wrong if I think I'll forget about you”). It is an excellent deviation that provides respite ahead of more intense tracks such as the claustrophobic “Tide” with its trippy, haunting dreamscape that is almost overpowering.

That this is now De Augustine’s second release for Sufjan Stevens' Asthmatic Kitty label is fitting. The two share an artistic sincerity, blessed with a unique ability to raise something beautiful from wasted ground. Tomb is a record of heartbreak that never wallows, a reflection on loss that does not allow itself to become stuck in the past, and resolutely optimistic at its core. What we find here, on what is arguably the pinnacle of his output to date, is De Augustine achieving the beautiful balance between introspection and grandeur; straddling the place where pain and hope intersect.