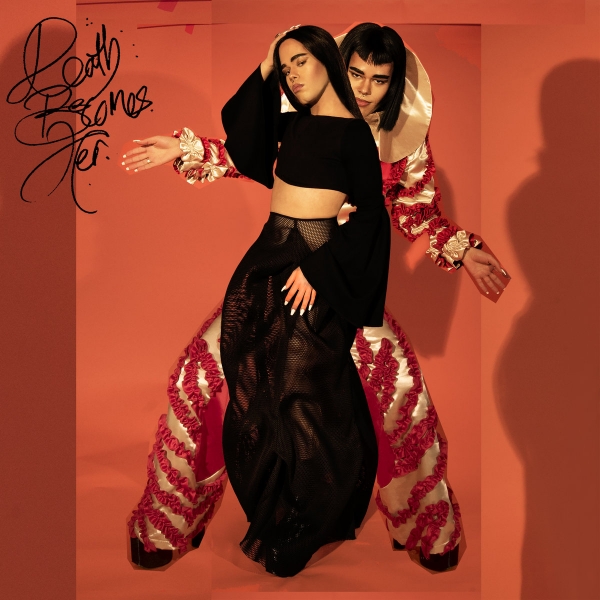 Death Becomes Her is a lot, and to untangle it, it helps to know a little bit about NON Worldwide, the collective – perhaps the movement – Angel Ho has run with fellow artists Nkisi (UK) and Chino Amobi (US). In their own words, NON create 'sound opposing contemporary canons' and their output to date has been concerned with pushing dance music to its extremities. NON's whole ethos is grounded in uniting African artists from disparate states and giving them a space to transgress boundaries erected by colonialism, structural racism and cis-het normativity.

To put it another way: the members of NON want disruption. Angel Ho's last release Red Devil testified to this: a violent record with the barest shades of techno, it crafted a highly effective anti-club sound out of smashed glass, drilling bass and flurries of white noise.

Now signed to Hyperdub, the pull for Angel to create something a little more mass appeal may have beckoned, but Death Becomes Her is possibly her firmest statement of outlier status so far. In its finest moments, it demonstrates the potency of experimental club music – dynamic, disorderly and charged with emotion. Sadly, a chunk of tracks amount to more of an endurance test, one which some listeners will simply nope out of.

Plurality is a theme: just like on the LP's cover, Angel Ho seems to switch costumes between tracks, partly a consequence of the album's personnel. The sweeter quasi-R'n'B, for example, come courtesy of Kelela's phenomenal co-conspirator Asmara and South African SOPHIE-esque producer Baby Caramelle. The aggro house and popcorn synths of "Like a Girl" fall somewhere between Azealia Banks and SHYGIRL, with a show-stealing 16 bars from New York MC K-Rizz. On bedroom jam "Baby Tee", Angel and self-proclaimed 'international playboy' K-$ croon to their respective lovers, references to trans experience woven throughout (“Dysphoria warrior, not the typical; Disconnected from my body at times but who isn't tho?” confides K-$). "Like That" is comparatively minimal, flickering with trap static and featuring Angel fully incarnated as a rap diva.

On these tracks, Angel often shout-sings, shunning autotune and instead double-tracking consciously discordant vocals: an idiosyncratic approach to production that keeps these otherwise almost-pop cuts in the 'experimental' camp.

In the opposite corner sit the tracks exclusively produced by Angel Ho herself, volatile and cacophonous. When bridled, her power is devastating. Track one, "Business", opens with the slap of high heels, Angel spitting breathy, increasingly loaded bars as throbbing kicks come thick and fast ('Put your hoes in the market, watch the stock return a fail; now all your bros in my DMs like fan mail.'). "Live" is an industrial torrent, peppered with pop culture references – Angel breaks out into an atonal rendition of "Stayin' Alive" mid-chorus – that contrast starkly with its turbulent heart.

It's clear, of course, that Angel Ho values purity of expression above all else. She's been responsible for elevating a multitude of voices rarely heard over the sea of cis white dudes dominating club music. And in her art, she's been clear to connect the power to affront with the desire to work through the trauma of oppression. Despite its merits, Death Becomes Her is a frequently distressing listen – but maybe that's the point.