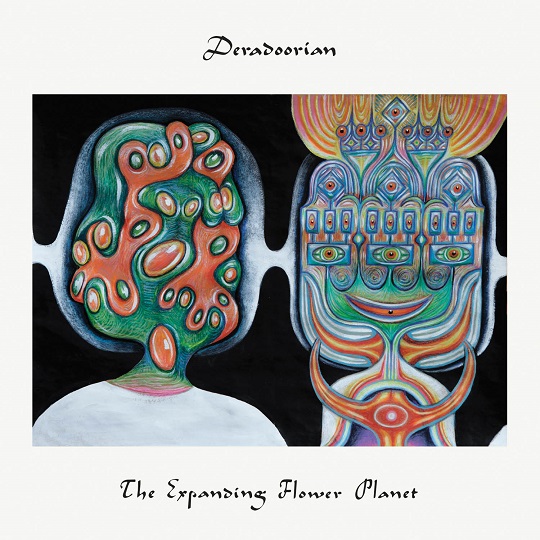 Angel Deradoorian’s debut album The Expanding Flower Planet, like Alice’s journey into Wonderland, is an exploration of consciousness and unconsciousness, the wider world and her inner psyche.

It’s been a long journey for her to get to this point. Since leaving Dirty Projectors Deradoorian kept herself busy, releasing the introduction to her solo incarnation, 2009’s Mind Raft EP and guesting with Flying Lotus amongst others, while waiting for the vision she had for her own record to manifest. Now it's finally here, and it was certainly worth the wait.

The opening “A Beautiful Woman” introduces two of Deradoorian’s key musical motifs; the multi-layering of her voice and a creative approach to rhythmic textures. The song has that same lissom groove Beck wrought on ”Sexx Laws”, with the bass and drums underpinning her vocal, which lifts the song right out there into an otherworldly space.

Her approach to singing is remarkable throughout, with her voice sometimes deployed as another instrument rather than the centre point of the song, such as on “Ouneya” where the words are half spoken in what sounds like a private language. The vocals sound onomatopoeic and are accompanied rhythms that constantly change tempo, which adds a marvellously disorientating effect.

It’s not just the voice and rhythm that adds to the colour and uniqueness of her songwriting however; the instrumentation is also strikingly unconventional, with swathes of keyboards and synths adding different tones. “Komodo” starts with what sounds like wind chimes, and to return to the Lewis Carroll theme, it's like an Eastern music version of Jefferson Airplane’s “White Rabbit”, suitably psychedelic but utterly graceful. A piccolo adds to the sombreness of the mood and the words, which are a constant delight, contrast brilliantly with the calmness of the melody, "Run for the hills, run for your lives…"

“DarkLord”, the song that provided the moment of clarity on her path to making the album, has the first noticeable sound of an electric guitar and the dissonant riff and jazz drums lend it a woozy Warpaint air. The words “If it’s not possible, it’s not possible, if it’s possible, tell me how”, chart her internal monologue on the creative process, with the DarkLord revealed to be her battle with her muse.

Deradoorian also knows how to write subtly beautiful love songs. “Violet Minded”, features a series of giddily smitten vocal leaps and ends with the incredibly romantic line “Looking out across the sea, one body, one body.” It’s a tale of mutual symbiosis and interdependency, with the singing matching the tenderness of the sentiment.

The closer “Grow” takes a completely different musical approach from what’s come before. Starting as a campfire strum on an acoustic guitar, woodwind instruments appear halfway in; the guitar is replaced by drums and the rhythm changes completely. The two parts are bridged by a flute yet the song retains its cohesion because of her wonderfully fluid voice. And again, the words speak of a desire for transcendence. “Beyond you, beyond me, how do we learn so we can all teach?”

The Expanding Flower Planet is a record that’s equally concerned with the big questions of ‘why are we here?’ as it is with more personal ones on the nature of love. It’s a very brave record where Deradoorian eschews the traditional language of pop music to create her own pictures and conversations and turn them into brilliantly beautiful songs.

Using such a variety of devices could have made for a disjointed record, but one of The Expanding Flower Planet’s many strengths is that it takes in a raft of disparate elements and manages to make them sound naturally cohesive. Even though it took a while for Deradoorian to write her first album, the destination she’s arrived at is a wonderful place.