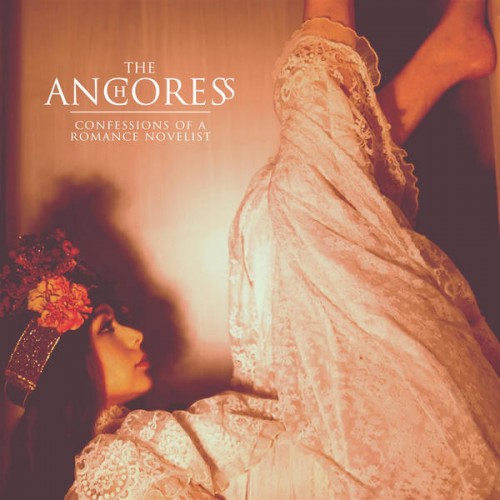 A female hermit you say, dictionary? No, Catherine Ann Davies is definitely not the shy, retiring sort. The Anchoress is the latest iteration of her persona following releases under the name Catherine A.D. and collaborating on more projects than you can waft a wand at. Confessions Of A Romance Novelist is bursting at the corset, dressing female identity in a rich and varied wardrobe.

Labels such as ‘revenge-pop’ and ‘feminist’ do a disservice to this collection of songs. Confessions... adopts stances in order to explore them, before casting them off to adopt a different guise. There is no distant sound of axes grinding. If anything, The Anchoress is constantly poking fun, joining in, in order to illustrate difference; playing with words, what they can mean and how they can be expressed.

Read any interview with Davies and there will be spiky one-liners jabbing you right in funny bone and the brain (she’s an avid multi-tasker), and her songs are no different. On "One For Sorrow" the phrase “you don’t know me / because I only call you when I’m drinking” is at first humorous, then increasingly worrying the more you think about it.

"Popular" is primarily about social expectations of success and being liked, but is also a ‘pop’ number which should carry all the hallmarks of a factory-pressed generically constructed song. Instead of course, it's unconventional, a tune where lines like “I’m gonna name my bastard children / after children of the Russian Tsars” and “I’m going to stretch my mouth to let the big words out / just like the man on the radio” are normal.

The message is clear throughout Confessions Of A Romance Novelist. Whether it’s ‘be yourself’, ‘you can be fine on your own’ or ‘aren’t men a pain?’, it’s always engagingly illustrated and liberating to hear. When dealing with issues in a more tender fashion, her PhD makes The Anchoress a handy wordsmith herself: “a deck of cards / without a heart / ’cause everything was broken from the start” from "Waiting to Breathe" is one of many poetic constructions on an aching track.

Lovingly co-produced with Paul (Mansun) Draper, Davies is on startling form throughout, layering spellbinding vocal harmonies and turning her hand to a long list of instruments with names few will even recognise. Pop, rock, some spoken word and a splash of funk for "Chip On Your Shoulder" give a sense of the musical flavours which marry with the insightful, intelligent songwriting on this hugely entertaining album.