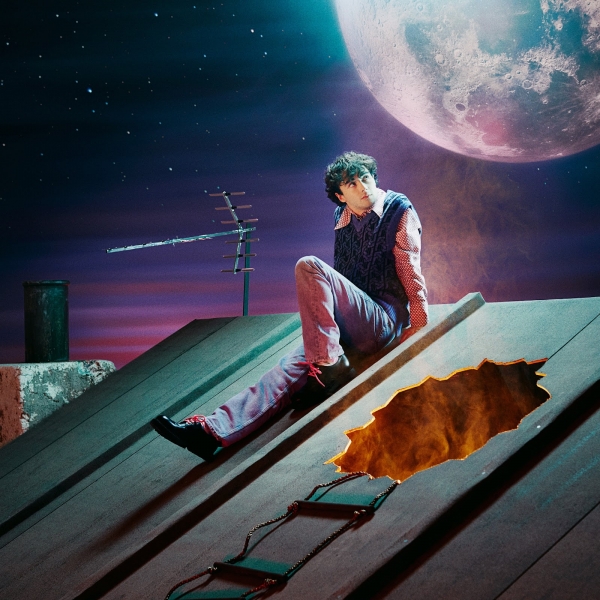 With several self-produced singles, EPs and mini-albums under his belt, Alfie Templeman’s debut album was a long time coming for anyone who’s joined along the sugary, rainbow belt ride.

With an extensive back catalogue of angsty experimentation, expanding over four years, his debut record Mellow Moon acts as a leap into the unknown, as Templeman appears to dip in and out of past projects to create something with final finesse.

Growing up in an era where indie/rock was unavoidable, the album is transparent with Templeman’s youthful influences. The feathery “Folding Mountains” is a perfect homage to Everything Everything’s “Distant Past”, whilst “Candyfloss” takes on more of a circa 2016 The 1975 vibe, laying heavy with bold synths and connotations of pink. Whilst admirable influence lies heavy, Templeman’s musical mentor’s value gets added in the album too. Regular collaborator Tom McFarland’s (Jungle) direction drizzles in “You’re A Liar”, as Alfie takes on that stealthy sound with a manipulation of his vocals to reach falsetto peaks that effortlessly sweep along the surface.

Unbelievably, some old folk genuinely still believe your teenage years are the best days of your life, Alfie Templeman fights to prove it’s not all that. The transparent juxtaposition of “Broken” is one of Templeman’s finest offerings to the record. Possessing a chirpy anthemic sound, Alfie presents modern teenage angst with the anxieties of not ‘fitting in’, poignantly singing “Sometimes I think that I might be broken / Don’t you feel like you’re broken?”.

Whilst he floods creativity into the engine of his tracks to generate a powerful sound basis, it becomes apparent that sometimes Alfie needs to be refuelled in the lyric department. The new-wave-esque “Do It” needs a bit of zest and imagination, as “Buy my album, show some love / Go to Paris, see some stuff” just doesn’t come out on top.

Daring to escape from the chaos of his own mind, “Take Some Time Away” is an impressive piece that could easily work as a The Last Shadow Puppets B-side. Exceptionally sultry with string sections and an impressive guitar solo, the track is a pedestal to showcase Templeman’s skills and versatility. And his showmanship doesn’t end there, closing track “Just Below The Above” is stunning, working as the anomaly of the album as the only slow song. Encasing essences from the likes of Radiohead, Bowie and Pink Floyd, it’s a psychadelic ecstasy that places the young musician at his most vulenarable. Mellow Moon acts as Alfie Templeman’s experimental wonderland that shows there is nothing that will halt his creative output.