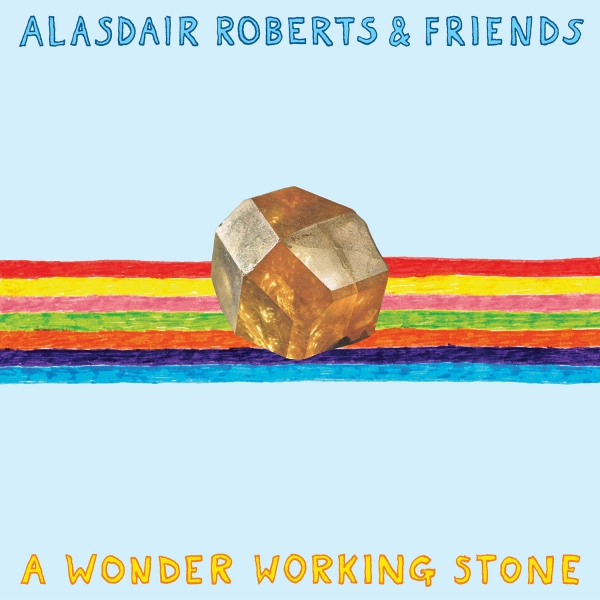 Although Alasdair Roberts’ songs are not the north face of folk music, some do nevertheless require a bit of commitment.

His slantwise songwriting subsumes and embodies the tradition it follows, often lyrically oblique but abidingly apposite. His deftly intricate guitar playing, spidery fingers bewitching the strings, can cast darkness from light, and his voice can sound stricken with sorrow.

A Wonder Working Stone, though, with its brightly coloured cover and friends on board, finds Roberts setting out in cheerier spirits. While recent solo live renditions of ‘The Merry Wake’ have slyly smiled between tempo-changing instrumental bursts from the acoustic guitar and a brief snatch of climactic scat singing, the full band performance is almost anarchically playful, electric guitar making free amid spirited fiddle and rocking bass, before the winking final entreaty “to the merry wake for your lover’s sake/New world is only a cock stride away”. The traditional merry wake, James Joyce’s “funferal” (as described in Finnegans Wake), offered more than feasting, drinking and dancing – sources speak of ”wanton orgies“ and “antediluvian ceremonies which included cross-dressing and nakedness“. This being so, the poetic elegance of his restrained and almost smut-defying lyrics does Roberts credit: “In hour of mayhem, in time of misgiving/Some turn to pastor, some turn to priest/Some would consort with the miserable living/But we’d rather sport with the gleeful deceased”. It’s a sparkling opening song.

Each of the ten tracks have been (mostly) penned by Roberts, in contrast to 2010’s intermittently grizzly trad ballad collection Too Long in this Condition (the first …& Friends release, with a slightly different line-up). This new album’s title is a lyric from ‘Fusion of Horizons’, where an ominous rolling medley underpins musings on the nature and being of love. “A wonder working stone” is one such casting, and there are many others, “a trellis of early roses” perhaps the prettiest, though misery lurks as it must. The song itself is named for a philosophical concept of widening perception within historically and culturally-embedded limits of interpretation, and the pertinence to an interpreter of traditional songs and themes is striking. Aside from hermeneutics, other inferences and influences – be they drawn from century-old poems, or centuries-old motifs – are woven into yarns of gloom and beauty, abstruse but astute to the human condition.

Back in the ’70s, Britain and Germany (the latter Roberts’ country of birth) shared a taste for medieval folk rock, and Ben Reynolds’ electric guitar lends shades of the genre to ‘The Year of the Burning’, a waltz-time tribute to those displaced in the Highland Clearances, thrusting and thirsting in equal measure. His friends’ presence and musical accompaniment vary in impact and mood but their adornments are certainly important to the overall success of the album. Just the added interest of occasional backing vocals, a banjo here and harmonica there, gives Roberts licence to sate his ambitious songwriting and linger long, taking each track as far as he pleases – and some comprise enough ideas for an EP. The most unlikely medley is track six: the stirring but sober ‘Song Composed in December’ giving way to fiddler Rafe Fitzpatrick’s softly-spoken Celtic rap delivered over the Bluebell Polka, a comically jaunty dance (not long ago recorded by sometime tune-singing trio Lady Maisery). Brassy echoes of this melody are briefly heard on ‘Scandal and Trance’, which proffers a prophecy neatly precising the album’s abiding outlook. “All days will end in joy”, chorus Alasdair and band, “they’ll never end in evil”.

In between, however, the frangible incest ballad ‘Brother Seed’ rather begs to disagree. This song, as much as anything else on the album, typifies Roberts’ skill as both an emulator and evolver of tradition. Lyrically potent (“And she a youngling in her bud/The green wood waxes early/She’s lain with one too near in blood/Where the deer go running yearly-o”), the natural imagery makes the story ageless, a macabre telling of a timeless tale. Syncopated handclaps give way to a percussive imitation of running water in the sombre second half as all unravels to inevitable ruin.

Alasdair Roberts makes an art form of blurring the borders between his freshly penned songs and the pervasive influence of the Scottish (and other British) folk music tradition, in which he is carving out a personal place all the while. Borrowed closing fiddle piece ‘Niel Gow’s Lament for his Second Wife’ is like a ribbon bow around this set, a final tying in of the heritage that flows through Roberts’ own output.

A master of mesmeric laments, Roberts can conjure dusky cemetery air in a twitching of his fingers or sombre exhalation, yet A Wonder Working Stone offers high spirits in the gloaming as well as low. I suspect only he could rhyme abracadabra with “intact cadaver” – but embracing life and the living requires toleration of misdeed and acceptance of mortality, appreciation that love survives time. All days will end, and it must be hoped they’ll end in joy.

Between the “lonely boneyard” and the “courtyard of the dead”, Alasdair Roberts & Friends might just have found his happy place.