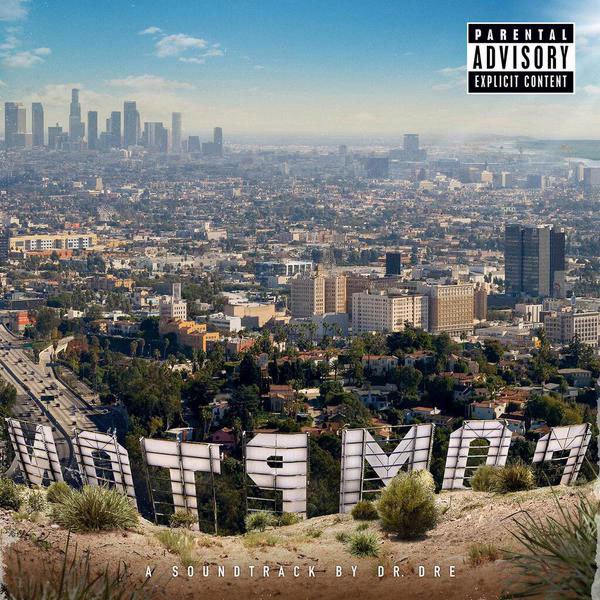 Listening to Compton: A Soundtrack, Dr. Dre’s new album, you’d think he didn’t already have a legacy in music - or, perhaps, he had one but you didn’t know it. The first thing Dre says here is, “I just bought California / Them other states ain’t far it behind, either.”

Of course, Dre's new record is supposed to be a companion piece of sorts to the N.W.A. biopic Straight Outta Compton, and that line is the logical finale of that narrative. The Doctor was apparently so inspired during the filming of Compton that he decided to make his own version. So, his quasi-soundtrack is his telling of the story, in addition to reflections on the music industry and gangsta life and space for his friends to wax poetic on the same topics.  Also, he now has all the money ever after Apple bought his company (to say nothing of the fact that he was already stupid wealthy).

As such, the record shares themes with The Chronic and 2001. The words themselves change and the guests rotate based upon the decade, but Compton's lyrical content is remarkably similar to its predecessors. Which is fine, because it's what we've come to expect from Andre Young after 30 years.

And, much like his other work, the guest verses are killer; Snoop Dogg offers two surprisingly great spots, Ice Cube hasn't sounded this hungry in years, and newcomer Jon Connor is a scene-stealer on "One Shot One Kill" and "For The Love Of Money". Naturally, the record's best verse comes from either Kendrick Lamar (who appears on three songs, and slays on every one) or Eminem, depending on your preference. The latter might edge out Kendrick on "Medicine Man," despite his "I'm gonna intensely yell everything" flow he's adopted for the last few years and his verse basically being a rewrite of "I Need A Doctor".

Yet, the real reason to listen to Dre is the production. He's always created beats with hooks for days and made it sound so effortless. He was notoriously never the greatest rapper, but his output as a producer is undeniably Hall of Fame level. That's what makes Compton so baffling: it's Dre's attempt at a cohesive whole without any real memorable music. The Chronic and 2001 were simply collections of great songs and the order didn't matter much; Compton, conversely, is one giant song presented as a specifically sequenced album.

While is succeeds as such - a lush, expensive-sounding art rap song-cycle - it fits the Doctor about as well as a baggy t-shirt. Dre makes great songs, not great albums. To wit, The Chronic is not so much a classic album as it is a damn near perfect collection of individual tracks. In other words, it's a classic by accident. Here, songs flow one to another over the disc's 60 minutes and, at times, it can be hard to pinpoint where one song ends and the next begins - even when the production shifts wildly. Arena-ready synth blairs ("Talk About It") give way to Neptunes-esque ice-cold paranoia ("Genocide"), which gives way to a smooth, '70s soul-aping beat ("It's All On Me"). And that's just the opening three songs.

Compton also contains a jazz-horns-over-slippery-bass experiment ("Loose Cannons"), a nervous, stadium-filling banger ("Issues"), and a trumpet solo that ends the album ("Talking To My Diary"). With all that jumping around, this, paradoxically, is Dre's least cohesive offering. The production - on which Dre oversaw and produced or co-produced every track - on individual songs is fantastic. When taken together, though, it's a confused mess - albeit an immensely captivating one.

With a different producer at the helm, this experiment may have worked. Unfortunately, with all his talent, Dr. Dre's ear lacks the scope and vision to properly curate such a wide array of ideas because that's not what he does. And that, ultimately, is the problem with Compton: this could have been a great album, but not from Dre. There isn't a single song here that feels timeless like "Nuthin' But a 'G' Thang" or "Forgot About Dre," or even songs he produced like "California Love" or "In da Club". Tellingly, midway through he  muses, "I ain't heard nothing that I consider classic." Yeah, me neither.