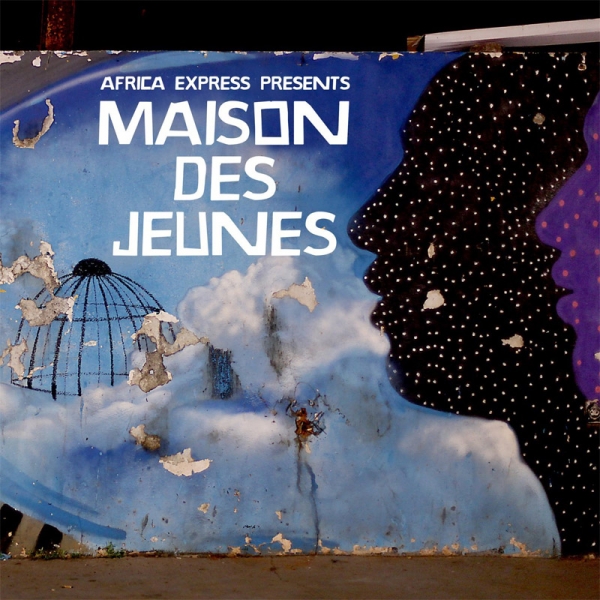 There are lots of ways to transport yourself to a place. It might be in the smells and sounds, the rhythm of a city street or soft sand grains between toes. Sometimes these are memories you make yourself, a place you flash back to at the whiff of warm rain. Other times it’s through the thoughtful, beautiful craft of others. And Africa Express Presents: Maison Des Jeunes is just that.

This is one hell of a distilled adventure. A one-way ticket to Malian riverbanks. It’s the smallest drop in an ocean of colour and of talent, and a gateway to so much more. In just one little week Maison Des Jeunes was recorded in the city youth club from which it takes it name. On the banks of the River Niger in Bamako, Mali a makeshift studio emerged as a base – for a project and for discovery.

The river splits the city in two, making space like the Thames through Damon Albarn’s London, and here his collective thrive.

Bamako’s urban roots took hold as the French colonialism of the 19th century set foot on its banks and you can hear it patter through many of the tracks here. The catalogue of tensions in Mali’s history echo too – from its days in the West African Empire through to rebel takeover of northern Mali in 2012. This latest period of unrest saw Tuareg rebels declare Azawad (the desert region) an independent state and a local militant Islamic group enforce a ban not only on drinking and smoking but music too. This ban on music, which included punishment for even listening to it on a phone, seemed like such an personal affront to such a place where the hum of life is a music all its own.

But tension, however catastrophic or silent, causes cracks and at those pressure points sometimes things can form – Songhoy Blues are one such example. From a place named Diré near Timbuktu in northern Mali, just on the bend of the Niger and in a spot the jihadist occupation cast a shadow, the band formed. On Maison Des Jeunes they pair up with Yeah Yeah Yeahs’ guitarist Nick Zinner on “Soubour” for their first studio track. It’s an astonishing, thumping sound drenched in celebration not anger with glorious pockets of guitar that wrap around a poised vocal line.

Each track brings with it something unfathomable. It’s impossible to see peaks, it’s all just shades and tones, the lilt and sway. The gentle beginnings of “Fantainfalla Toyi Bolo” sees metallic touches pass across Adama Koita’s vocal sound looking east, while the next step is straight across into the more contemporary space filled out by Tal B Halala on “Rapou Kanou” as his Arabic words whip across sounds of cutlery clattering and sampled sound on a track produced by London’s Two Inch Punch. “Yamore” runs on from this point with the plump, untrammelled voice of Kankou Kouyaté so full of guts spilling quietly, the subtle backdrop circling in perfectly pitched support.

There are sounds peppered through that seem picked up from places found and other from some of the live performances also crammed into that week. And then there are familiars too, as the lilt of Ghostpoet, pulling on other strings of British rap influence, strolls through on “Season Change”. While the namecheck on production reads: Albarn, Zinner, Brian Eno et al. and the tracklist marks up fresher faces too from Metronomy’s Olugbenga Adelekan to Django Django’s David Maclean.

But perhaps the most striking thing of all is “Farafina”, which not only appears to bring so much of everything together in one sweep but stays with you. Carved in the language of those that colonised and in temporary delivery over a traditional kora canvas, this penultimate track, produced by Albarn, is a neat summation of this project’s faculty.

This record is a creation: you can hear the adventure in it. Not a homogenous product from a blueprint but a tussle of great spirit that grows with each listen. Sit with it and you hear new things, you find new places. New senses tickled and new notes bloom in ears. The spirit of collaboration and adventure that has always sat at the heart of Africa Express remains, as musicians push themselves and each other to experiment and explore.

And it’s not just the sounds you discover but the sounds you hear for the first time – new instruments, new ways of hearing language. There is an important element to Africa Express that comes with the exposure – it can be a first step into a world or it can be a new way of hearing a cherished artist. It’s this blend of education, exploration and experimentation that makes work like this not only powerful but a joy to hear.