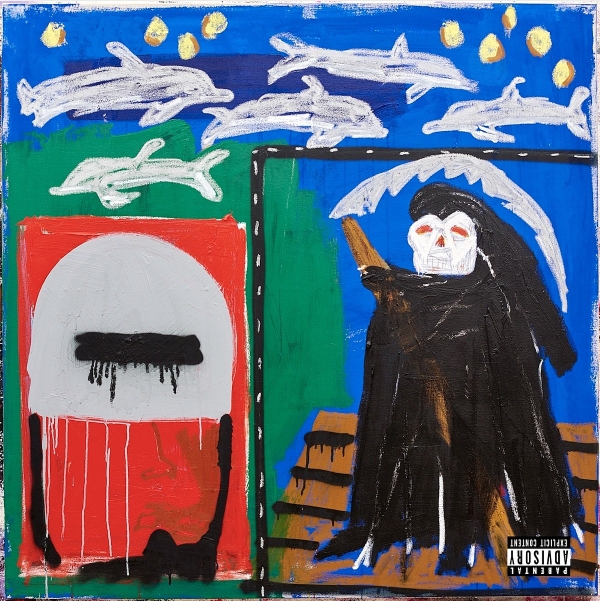 Out of the 2010-2012 wave of Adult Swim-adjacent, stoner-courting rappers which counted as figureheads Tyler The Creator, Earl Sweatshirt and A$AP Rocky, Action Bronson has come the furthest, while growing the least.

He is now a bonafide brand of his own, appearing in The Irishman and The King of Staten Island, with a range of shows and cookbooks to his name. But he is also in a state of artistic stasis: his past four studio albums could have been mistaken for debut mixtapes, but does it really matter? His rhymes remain hilarious, his personality oversized, and with a signature sound crafted by Alchemist and Party Supplies, as long as nobody sounds quite like Bam Bam, he’s gravy.

Rather than weaving introspection or a new direction into his songs, Bronson has instead leant even harder into the ridiculous on his seventh studio album: dedicating this one to dolphins; “those higher beings who are on the same telepathic wave as me”. Audacious amounts of dolphin-references and sound effects aside, the record is vintage Bronson, and he’s on fine form. The production drips in opulence, and his off-the-cuff bars - delivered in a New Yorker-lilt which is infinitely impressive - boast an enviable swagger.

Bronson bursts into the album amongst carnival horns, rapping “all-black Cherokee because I can’t fit this body in the Lambo / all this marble got me feeling like a Roman”; and so the album continues with bars which revel in material wealth, food, gluttony and the ridiculous, all with his own voice interjecting as a hype man: “so charming!”. The confidence is infectious: ‘Sergio’ is my favourite song here simply because it makes me feel like Scarface, luxuriating in Little Paradise before Sosa's men turn up and spoil the fun: “feeling good’s the only thing I know” Bronson raps. “I’m wired different / the very thought of me inspires vision / puts a smile on the face of a man who knows he’s about to die in prison / some would say divine and mystic because I could eat a bag of mushrooms and still drive a stick shift”.

This Kingpin fantasy role-play is soundtracked by a impressively cosmopolitan array of sounds, from the booming drums and jazz-bar piano of “Vega”, the Turkish Funk of “Mongolia” and the smooth Cocaine-disco of “Splash”, which seems to be an advert for his aforementioned signature scent. The eclecticism yields some misses along, like the paper-thin reggae of “Cliff Hanger”, and the Bronson’s one mode just about outstays it’s welcome by the album’s final moments, but he remains colourful, deeply entertaining and stubbornly unchanging.