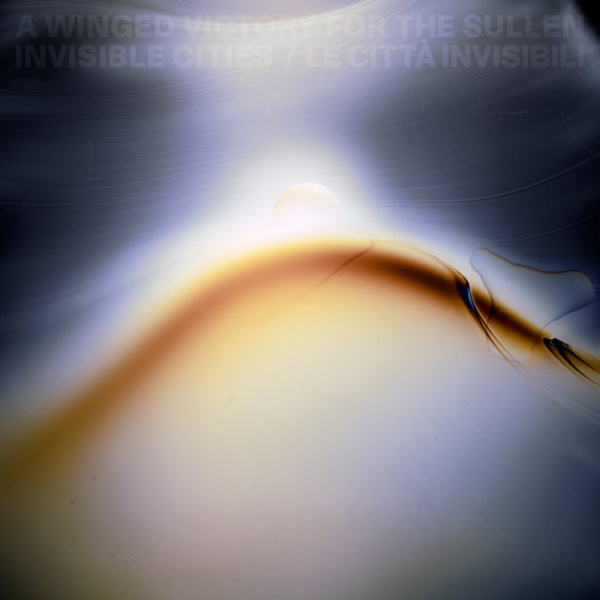 The score to a dance theatre version of Italo Calvino’s novel, this latest release from A Winged Victory for the Sullen continues the duo’s musical excursions developed in the last album, The Undivided Five, which was inspired by the paintings of Hilma af Klint.

The recognisable wide-angle instrumental soundscape now incorporates some intelligently-arranged vocal elements at key points, serving well to convey contrast and dramatic effects arising out of Marco Polo’s verbal images which have long exercised scholars’ views on the disputed matter of their truthfulness.

So, appropriately enough, “Thirteenth Century Travelogue” suggests a contrast between the real and the imagined (or between the genuine and the fraudulent), as the ambient texture is cross-cut by a slightly sinister metallic sound that uneasily breaks up the underlying majestic harmonies.

Such deliberately unsettling intrusions testify to AWVFTS’s willingness to go further beyond the more immersive that was a dominant characteristic of their earliest recordings. Calvino’s literary style is unorthodox, rarely offering a traditionally linear narrative; instead, favouring structures and register shifts that call into question his readers’ usual assumptions. This is echoed here, with the introduction of sound effects that are always interesting and never gratuitous, as they take themes and ideas in original directions.

That ambiguous area between the factual and the fictional is suggested from the outset on this album, as the swelling instrumental of the (significantly titled) “So That the City Can Begin to Exist” gives way to an angelic eight-voice choir sound of “The Celestial City” against a slightly discordant pulsing rhythm; an uneasy balance of the kind that is so well handled across the record.

The consistent delicacy of Dustin O’Halloran’s piano often contrasts with some threatening industrial-type effects or thunderous orchestral surges. The languid piano introducing “The Divided City” leads to an arresting, wholly-convincing swerve in the strings that, in turn, dies away before the rhythm picks up in the following track emphasising strings more fully, and then a delightful Bach-style cello theme brings in “There Is One of Which You Never Speak” collapsing into a fierce electrical sizzle.

It’s a record of successful explorations of musical avenues. The sparingly-used vocals enhance the instrumentation that, itself, moves between the minimal and the more full-blooded. A first rate illustration of growing musical ambition and inventiveness.