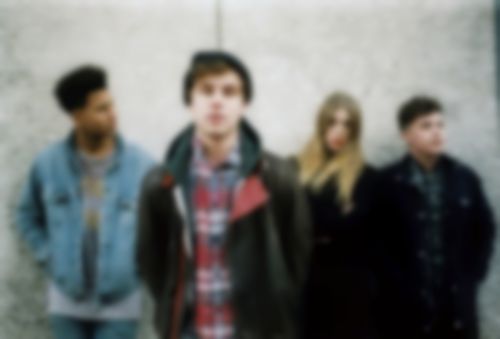 With the new MAM EP being released just around the corner on 3rd March via Infectious and a debut album in the works for the summer, the band laid bare some new material for fans including “Right On Satellite” and “It’s Good To See You”.

So fresh from the studio are they that lead singer Dom Ganderton stopped to admire the audience halfway through marvelling “We’ve been so busy doing the new album, it’s weird to see other people”. But being seen they are, as erratic dancing broke out from the hungry crowd during the opening bars of “Melting”.

As a foursome their sound as tight and it is fun, with Ganderton’s vocals bouncing around jovially with that of lead guitarist and fellow singer Ryan Malcolm. Bassist Emily Baker holds a more stoic temperament standing strong in comparison to the thrashes of drummer Carl Griffin.

It was surging single “TV” that elicited the biggest response with its shouty, jagged edges and by the time chirpy yet bolshy self-titled number “Superfood” was done, a full blown moshpit was in full swing.

What’s clear from the band’s live show is Superfood are best served loud, with a generous side of rowdy.

It’s Good To See You