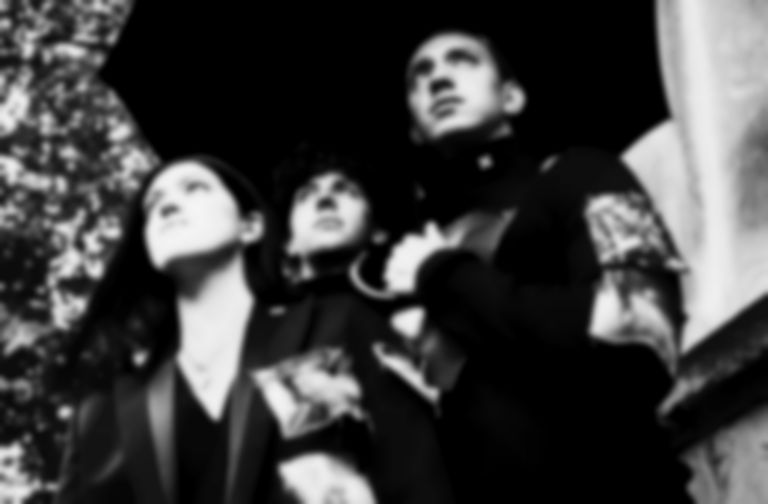 The xx have announced the release of their new clothing collection with Raf Simons which celebrates the 10th anniversary of their debut album xx.

Last month, the xx shared a teaser image of their new Raf Simons clothing collaboration, and today they've announced the full details of the collection.

The collection is inspired by The xx's debut album xx, which turned 10 in August.

Simons and The xx's clothing line includes t-shirts, patches, a cap, and a set of pins.

Discussing his new collaboration with The xx, Simons says, "The album xx represents a very distinct sensibility linked to youth culture at the time. It succeeds in articulating and putting into words what is going on in the minds of kids when they're dealing with love, heartbreak, friendships. And not in the stereotypical way, it seemed much more real in a way. More authentic. Working with the guys has been so amazing and so easy to do at the same time. We have worked together before, of course, and I just think we are already quite attuned to each other in the sense that we know very well what we want and what we can offer each other."

Simons adds, "When they reached out to do something together to celebrate the 10th anniversary of xx, I didn't have to think twice. I have been a fan of theirs since the very beginning, and I'm so happy and grateful for the fact we became friends and got to collaborate in so many ways."

Our capsule collection with @rafsimons will be available in stores next week on December 12th. It’s such an honour to collaborate with a hero of ours to celebrate the 10 year anniversary of our first album release. We loved Raf’s idea of linking the collaboration to an aspect of his latest collection, patches. This sense of DIY with clothes is something that reminded us a lot of when we were teenagers, the nostalgia of that really links in with the memories we have of making our first record. The collection includes patches, pins, t-shirt and a cap. 2 very limited sets of patches are available for preorder on our website today, we hope you’ll enjoy pinning or sewing them on your favourite clothes. xx the xx Raf Simons / The xx will be available Dec 12th at: @ssense / @antoniolieu / @midwest_official / @doverstreetmarketginza / @galerieslafayettechampselysees / @kuznetskymost20 / @joycehk / @galleriadept Photographs by @willyvanderperre Styling by #olivierrizzo @rafsimons @systemmagazine

The xx's Romy Madley Croft adds of the collabration, "I was introduced to Raf's work through the collaborations he had done with other musicians. How he wove bands' work into his work really excited me. I hadn't seen that so much; it felt like an homage to merch while being something completely new and different. We met Raf for the first time in 2014 when he invited us to play at The Guggenheim in New York for Dior. Obviously, it was the most incredible invitation to receive. We had a fun time and went out after the show when we had the chance to talk to each other. We felt an immediate connection. I thought that he was a very emotionally intelligent person and I really enjoyed talking to him. I felt really close to him from the beginning. He had such an in-depth, thoughtful, considerate and meaningful intent. I love that about him: nothing is flippant, everything comes really from a thought-out and cared-about place."

She continues, "The concept of the DIY aspect in the 10th anniversary merch collection, using patches and pinning them on yourself, is something that feels very teenage to me. This links nicely with the first album - we were teenagers when we wrote the songs, and I was definitely doing that kind of thing with what I was wearing. I got in trouble at school because I was cutting up my uniform. My dad once got a voicemail from school saying "She looked like she was going to a rock concert", which I thought was hilarious. I love that Raf wanted to combine those ideas from him collection into our collaboration."

The xx and Raf Simons' clothing collection will be available to buy from 12 December. Find out more.