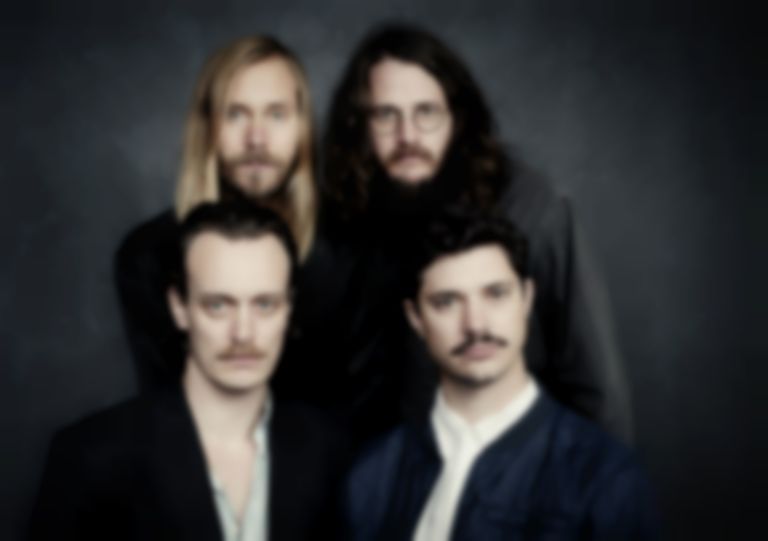 With their debut album ii set for release this Friday, Danish-Finnish quartet Liima have spoken about their unique way of writing and recording music together.

Made up of Tatu Rönkkö, plus Efterklang's Mads Brauer, Casper Clausen and Rasmus Stolberg, Liima recorded their album in three days following week-long residencies in Finland, Berlin, Istanbul and Maderia where they would compose during the day and play a live concert at night made up of the newly-written songs.

As the band continues to work in this same way, creating music at each new residency they are defying the limits of what we know as being the conventional way to make, record and release new music. We spoke to the band's bassist Rasmus Stolberg following Liima's residency at Copenhagen's Frost Festival to find out more about how the quartet made ii.

Hi Rasmus, was the band's residency at Frost a success?

“Yes! It’s funny, there were these filmmakers recording and I was just watching the documentary. We did four new songs and I especially really liked three of them. We did five new songs when we did the London residency in January – they were all fine but one of them was really good. But at Frost, I really think we hit on something…at the moment, we’re very happy with it but of course that can change.”

What was the routine for the festival, assuming there was one?

“It was very intense; we had one day to set up and get going and the next three days we were writing songs, and each day we had a show in the evening. We didn’t have any dinner! We were working all the way up until doors would open, and then we’d get half an hour before we have to go on. Very intense, but fun. It’s cool to get into something that intense and get something done.”

With this way of working, Liima must constantly be making new music...and I assume that's the point of the project, to do it in a whole new way?

“Yeah; we’ve written so much new music already before the album is even out. It feels really good; I mean, being tired of that whole album cycle setup is also one of the motivations to start this project and to work like this. It’s definitely something we can appreciate, that we’re able to do things differently with this band.”

What were the other motivations?

“The other side is how practical it is. The four of us live in three different cities, so working like this is almost the only option. We can also send sketches back and forth, but this band is about getting together and playing music live in a rehearsal room or on stage.”

Can you tell me a bit more about Efterklang's relationship with Tatu Rönkkö?

“Yeah, he was drumming in the Efterklang live band and we had really good chemistry. There was this Finnish festival that wanted to invite us to do a residency with someone – they wanted Efterklang to do a collaboration and we immediately suggested Tatu. It was perfect; he’s Finnish and we’d wanted to work together for a long time. The four of us got together in July 2014 and we had ten days to write and make music, and then premiere everything at a show.”

So there were no plans in place at that stage to make an album together?

“When we started there were no plans to make this a band, but after that show we immediately agreed we had to make a band out of it. There was a great creative flow, and a collective consensus about creating something in a nice way together, so we decided that the band should just continue in that way of working.”

How do the songs begin; is the a starting point to the improvisation?

“No-one comes with sketches, no-one comes with ideas. The great thing about Liima is that we don’t work on it in a compositional way when we’re not together. It usually starts by someone doing something, and someone else reacts to it…and suddenly we’re playing something. The key is that we record everything. If something clicks and the four of us like it, we go back to the recording and start carving out a song from that idea. Sometimes the improvisations start from absolutely nothing, sometimes they start from ideas each of us have. Maybe I give out keywords, maybe I have a groove on the bass that I want to try out…and we just see what happens.”

Does it work the same for the residencies?

“Usually when we have the residencies we start first day by just improvising and jamming, going to a lot of different spaces and feelings, different energies. And then we start to listen, start to locate moments and ideas which we all like…and then we start composing. Sometimes it can take an hour or two to find a song in there and finish it, sometimes it can take a few days.”

You've had residencies in a few different countries and environments, does that affect how the songs sound?

“Yeah; sometimes there’s a direct inspiration from where we are, sometimes it’s something which happens without us really noticing it. I think the main inspiration is the four of us inspiring each other but where we are plays a role in things. In some songs it’s direct; for example, the songs we did in Madeira – they all have this laid-back, taking it easy feel. From Finland, there’s one song on the record called ‘Woods’ which we recorded in the Finnish woods….it’s something that does affect the music but I’m not sure exactly how.”

Is this way of writing and recording now a dogma for Liima...will it stay for any future releases?

“I’m confident we’re gonna make the next record in the same way. The way I’m feeling right now is that I’d be happy for Liima to make music like this for however long the band exists. I’m definitely open to change as well; the key is that we all have different projects: Tatu has a solo project and another band, the three of us have Efterklang and our projects – you saw one of them in Copenhagen last summer [the Leaves opera]. The most beautiful thing about Liima is that it’s this place that we meet up, we don’t think about all these other projects that we do. We’re in a moment together, we don’t come prepared and it’s just great to know that for the next five days I’m gonna be in a room with three of my best friends and we’re gonna make stuff together. It sort of becomes a free haven in a chaotic world.”

It feels like it's the first project you've all had where the freedom to do what you like is the biggest benefit...

“Absolutely. I wouldn’t have been able to make music like this five or ten years ago. It’s something we’re able to do because we’ve tried different things – being in bands or composing music in various ways. We know that the four of us together like this, works. I don’t think I could have figured that out earlier.”

I can't let you go without asking about Efterklang; what are you three working on at the moment?

“I’m very happy getting the question from you, Andy, because most people think we don’t exist and we hate each other! But you know we’re still doing things, and all I can say is that we’re doing more of that stuff. We’re not making albums per se but we’re making a lot of music and working on projects together.”