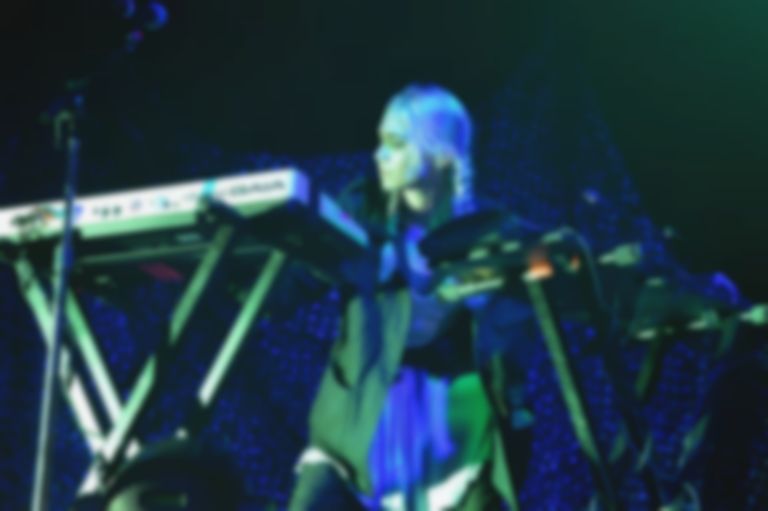 Grimes has revealed a lot of new information about her record and her love of the Star Wars films.

Grimes, AKA Claire Boucher, was speaking in two new interviews (both definitely worth exploring) - one with The FADER, and another with LOVE.

In the former - which is accompanied by a gorgeous set of photos - Boucher talks in depth about her past few years, both personally and professionally. We're not gonna run through it all here, but she spoke about a few details of the lucrative LP that's supposedly out this October.

As well as a rough date, we know that there'll be a song called "Flesh Without Blood", diss tracks, heavy metal alter egos, a collaboration with "three female MCs" about being "too scary to be objectified", and that she worked on it mostly at home before venturing into a studio for vocals (which she shared with longtime pal Blood Diamonds). Also, she plays self-taught drums, keys, guitar, violins, and ukuleles. It definitely sounds... varied.

Speaking about its direction, Boucher added: “I think all my other albums were, like, sad. And this time it’s more happy and angry. I live in my own house that I pay for. I bought all this equipment myself. I control my own life now. No one has any say over what I do or where I go or when I do it.”

In the latter interview with LOVE, she penned a love letter to George Lucas' sci-fi franchise:

“My name is Grimes and I first came to love Star Wars before I could even walk. It’s one of my dad’s favourite film series and we had all the box sets and remastered versions when I was growing up. He made us watch all the making-of documentaries and flagged up the technological innovations, such as they way they smeared peanut butter on lenses to make the cars look like they were floating. We even had super-detailed books about how to draw all the machinery and stuff, which was a huge influence on me as an illustrator.

"The originals are some of the only films that are as content-heavy as they are visually innovative. I’m hoping the new films keep to this standard, and the trailers I’ve seen so far suggest that this is the case. I’ve been studying film and colouring a lot lately, and I was completely blown away by their standard of technical achievement – the colour correction really stands out after years of homogenous, washed-out dystopian sci-fi trailers. It might simply be that CGI has reached an insanely realistic level, but I thought there were more costumes and prosthetics than I’ve seen recently. Chewie definitely seems like an actor in a suit, which I find less jarring than a CGI character – but maybe I’m just old [she’s 27 – Ed]. In the current climate, a costumed non-human character is almost seems vintage, which is definitely tripping me out because that was still the standard when I was a kid.

"Costuming has always been one of the strongest aspects of the series. Even the prequel trilogy had striking costumes (a la Princess Amidala’s outfit that heavily referenced royal Mongolian garb - AKA the fashion pinnacle of humanity). I’m stoked to see that they didn’t change the stormtroopers much. A lot of the costumes hold true to the original trilogy, which is a testament to the agelessness of the original design.

"The cast is really interesting across the board too. Gwendolyn Christie and Lupita Nyong’o are two of my favourite actresses, and neither made her name doing something overtly feminine or sexualised, which is not the norm for female leads in action films these days. Carrie Fisher is also a total babe and slayer.

"But that said, some of the greatest innovations in Star Wars are the non-human characters, especially the droids. The interaction between R2-D2 and the other characters is amazing. Artoo is essentially a weird sexless robot who never speaks but is able to communicate so much and create a dialogue in situations where it wouldn’t be appropriate for other, speaking characters to be – for example, in Empire, when he lands with Luke Skywalker on Dagobah. It’s important that Luke goes alone to meet Yoda, but without Artoo his ability to communicate to the audience would be severely limited. This storytelling tactic is still used all the time in sci-fi (see Groot). Star Wars has always walked the line between cute and scary in that regard, and communicating in non-verbal ways using non-human characters.

"The other main droid, C-3PO has always been a personal favourite of mine. I really relate to his fear of death (among other things), although I doubt most self-aware robots in the future will be as sympathetic and benevolent to humans as he is. Like Artoo, he allows for unique narrative situations because of his ability to translate non-human characters, allowing the universe to feel more believable and complete (because it would be stupid if everyone spoke English). Rewatching the movies as an adult, C-3PO’s stuttering humanity is a great foil for the violence and intensity of the films. Almost any scary or violent scene is mitigated by a worried awkward robot complaining about safety. And, as with Artoo, you are never really sure of C-3PO is male or female – and with programming he or she could really be any age. There’s a lot of room for the audience to project onto either droid, which is probably another reason why the films have such broad appeal.”