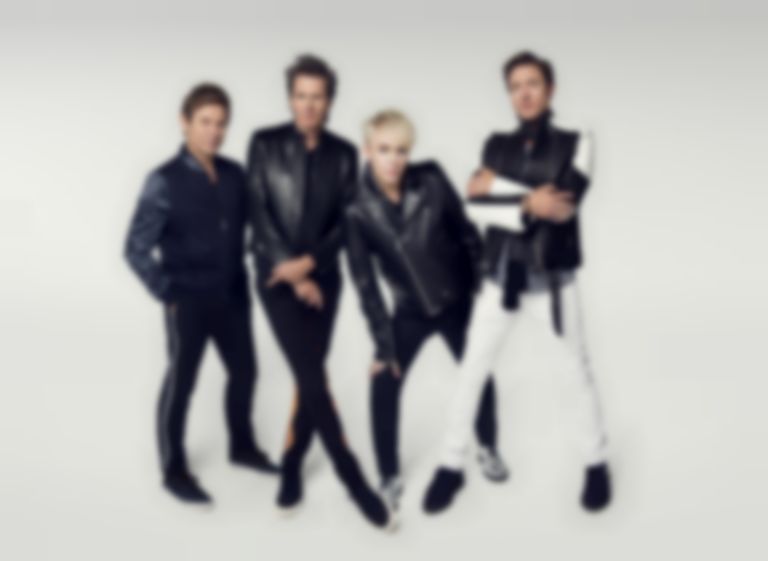 The first tastes have been startlingly effective funk-laced pop tunes - "Pressure Off" zigs and zags through modern hallmarks and their own '80s slinkiness. "You Kill Me With Silence" is a trap-lined synthpop stunner. Things have all been shaken up in the Duran Duran camp.

As they hurtle towards the LP's release, and their headline slot at this year's Bestival, we had a chat with the legendary group's lead singer Simon Le Bon. Below, Le Bon talks of his love of Mew, working with Lindsay Lohan, the "egalitarian" nature of collaborating, and still feeling invigorated 30-plus years into his career.

What was it like working with so many different people? Your past few albums have had a few guests, but this seems like a really collaborative record.

It was a big departure for us. It wasn’t something we ever made a conscious decision to do… it just sort of came up. John Frusciante [ex-Red Hot Chili Peppers guitarist] got in touch and put himself forward to do the guitar on some tracks, so we sent a few bits over to him, and what we got back was so brilliant. It was undeniable that we had something fabulous happening.

Ben Hudson [Mr. Hudson] joined the project halfway through last year, pretty much a year into the project, and he brought something very special in terms of production. Me and Roger [Taylor, drums] have always said we work better with a producer – we’re the guys always pushing to get somebody producing us – and Mark Ronson, who we started with, couldn’t do more than a couple of weeks before he had to jump off and do his own thing. We were a rudderless ship for about eight months, and then Ben came along, and we did “You Kill Me With Silence” and then “Paper Gods”, and his vocal on that really made me think. I thought about the stuff John had played, and what Ben had brought, and that was the point we talked about getting a few more guests on board. In a funny sort of way it reinvigorated the band for us four guys – me and Nick [Rhodes, keys], John [Taylor, bass], and Roger – and of course management were super happy about it because it’s a story. That’s what they really wanted – a story to sell the record.

How did you keep it cohesive so it still sounded like an album?

I don’t know. I’m not sure. I think the cohesion probably comes from two things: it comes from the creative thrust that’s at the heart of it, and also by the very smart and subtle production direction that Ben Hudson has given the record. I cannot stress his role enough – he really helped us make it sound like an album. He was the glue that kept it together. I mean, you’ve never heard a song like “You Kill Me With Silence” from Duran Duran before… never with that kind of space and that kind of ability to not make sound, and to leave that gap. The sound of silence is a powerful sound. Ben is the guy who helped us find the confidence within ourselves to be able to do that.

So you’ve worked extensively with Nile Rodgers and Mark Ronson in the past, but was it any different this time around now that they're huge names in their own right?

They are massive, massive stars, but we’re all musicians together. It’s a very egalitarian world. As soon as you become a professional, the perceived hierarchy just disappears completely. Or it does for me, anyway... I mean, if you’re going to work with somebody, you’ve got to be able to work with them without any sense of self-consciousness or status. Status is a terrible thing in artistry. You can overlook that whole aspect.

How did “Pressure Off” with Janelle Monáe come about?

Ben put us in touch with Janelle. She’s fabulous. Me and John went to L.A. and we met up with Nile in this little recording studio and Janelle came down… she didn’t arrive ‘til 10 o’clock at night! Her and her – very modest – entourage went to the wrong studio and ended up the other side of L.A..

We had an idea of what we wanted, and we talked about it, and she sang the backing vocals in the verse, and then when we got to the middle, we wrote it there and then: her, me, John, and Nile. Between the four of us, we wrote the words, the rhythm, and the melody. She just did it. She makes it very easy. It was a similar experience with Kiesza. I was very aware of Kiesza through her “Hideaway” single… I spent a lot of early last year in the gymnasium working on my knees on the exercise bikes. I think I saw her “Hideaway” video more than anything else while I was in there! She’s an incredible singer.

Lindsay Lohan is probably the name that people are most surprised about – how did that happen?

She’s big Hollywood! What’s she doing on a lil old Duran Duran album?! Lindsay... Lindsay is a friend of mine, she has been for years – and she loved the idea of being on a Duran Duran album produced by Mark Ronson. I put it in the back of my head, until we were listening to “Dancephobia”, when we realised we had to do something special in the middle. That’s when I had the wonderful brainwave to see if Lindsay would do the voiceover. It took her ages to get her to the studio, about two weeks of us saying ‘come on down this Wednesday’, and her going ‘yeah’ and then not coming… but we don’t know for an answer. We’re resilient, and we finally got her into the studio, and she nailed it in three takes. She did a great job. She really captured the fun, the slight naughtiness of it – we’re very proud of her.

How about “Change The Skyline” with Jonas Bjerre from Mew?

They’re just fantastic, aren’t they? I love his voice. I’ve not met him unfortunately – this collaboration was done completely in the modern way with no face-to-face contact. All via Dropbox or whatever. It’s an amazing mixture of his voice and mine, and the way it works in the record. I’m really happy with that one. Hopefully we’ll get to see him and perform it with him at some point!

Are you looking forward to headlining Bestival?

It’s a massive festival. It’s what they call a ‘tastemaker’ festival, so I’m told… we’ve come to festivals quite late in our career. We didn’t do them for a long time, and it’s only recently in the last five years we have started. Coachella was obviously the biggest one to date. It’s such a different mindset, a different stage. Most importantly, you’re playing your music to people who aren’t necessarily your own fans. That gives you a great opportunity to turn other people on, and it focuses you as an artist – it’s a real acid test, I think. It makes you leaner, more focused.

What can people expect?

I like bands that get people up and dancing. I want energy. I want to have fun. I want a little bit of darkness to contrast with the light. We’ll probably do two new songs, and we’ll play a lot of the hits. Perhaps some more obscure album tracks as well… we want a mixture.

Are you going to dress up?

Dress up? Maybe! I normally put some clothes on. I’ll tell you what we aren’t: we are not a dress down band. We don’t do dress down Friday; we do dress up Friday.

How do you feel that over 35 years into Duran Duran you’re still able to be at the top of your game and headline a major festival? What do you think it says?

It’s extraordinary. We’re going on as a current band as well, not like a heritage act… I think. That’s something we’re very happy about. As well as the festival, I love the Isle Of Wight! I sail quite a lot, so I spend a fair bit of my time down there. I went down for the Americas Cup, the catamaran races in Portsmouth, and I stayed with a good friend of mine who has a house in Cowes the night before.

What’s coming up this winter? Do you have anything planned?

We’ve got some big shows coming up in the U.S.A., shows at the Hollywood Bowl with Chic and Clean Bandit, we’ve got in November, we begin our U.K. tour – 11 dates around the country, including London O2, Bournemouth, Newcastle, Liverpool, Cardiff, Brighton, Glasgow, Manchester…. Nottingham, how many’s that? Nine? Not bad off the top of my head.

I think we’re headed back to the U.S. next year. They're hungry [like the wolf, perhaps] for Duran Duran in the States, and we have to satisfy them!