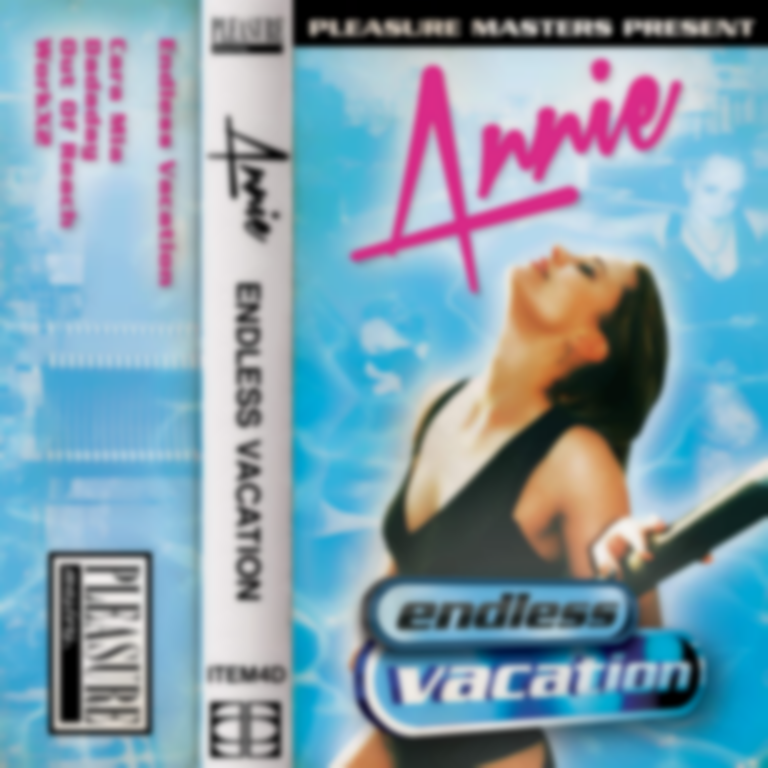 The four tracks, ranging from the dreamy "Cara Mia", through the nostalgic and flute-laden "Out of Reach" to the energetic "WorkX2" find the Norwegian once again working with producer Richard X, song writer Hannah Robinson and - for the first time - Sound of Arrows' Stefan Storm.

The EP's concept appears to be pop songs based around an 80s holiday, which on the surface of it seems perfect but if we dig a little deeper it's not quite all it's cracked up to be. So we caught up with Berlin-based Annie to find out a little bit more about some potential trouble in paradise...

Hi Annie, can you tell us when you started on these songs?

“Well I always keep in contact with Richard and we’d been sending files back and forth, but for ‘Cara Mia’ and ‘Dadadaday’ we met up and did those in London. I came over and met up with him and Stefan Storm – we spent three weeks constantly working!”

Stefan is a new addition to the people you normally work with, is that right?

“Yeah! I know him from Sound of Arrows; he’s such a brilliant song writer and musician and I was happy to finally meet and work with him. He has a very Scandinavian way of writing and I hope we’re going to do a lot more in the future. We started one or two tunes that we didn’t finish….”

What is it about Richard X that keeps you going back to work with him?

“Richard is really inspiring; not only when it comes to music. We have a lot in common when it comes to the things we listen to, even though we have a different background – but also he comes up with a lot of great ideas, great concepts. I think that’s what keeps us going; it’s really fun to have new ideas…he’s basically just a brilliant producer.”

Can you tell us a little bit more about Endless Vacation? It feels like a very nostalgic record, but not always looking back fondly.

“I remember the first time I went on holiday, I was thirteen and I went to Lagos [in Portugal] or somewhere and it felt like the greatest thing I’d ever done. It was like coming to paradise for the first time and you just think ‘this is it, this is where I’m going to live forever’….but then at the same time I remember sitting in the hotel at breakfast, and I saw this couple. You’d see them every day, and they were so tanned! They had such a tan that it looked like leather! At that time I thought that if you were really tanned, you had to be successful…I said to my mother that they must be so lucky, but she said ‘look, they must be really unhappy – they’re not talking to each other!’ And at that point I realised that you could be in such a wonderful place but actually be quite unhappy. It struck me that you could be trapped in this paradise on a vacation that doesn’t end, like a nightmare.”

Where does the title come from?

“I came up with the idea when I was watching a Hitchcock film with Grace Kelly…is it Rear Window? – with James Stewart. I think she’s in love with him and she says the line ‘it’s just like being a tourist on an endless vacation’…It was just a really strong sentiment and really suited the record and the idea I had about this concept of the endless vacation.”

There's an overwhelming 80s pop feel to the songs, and you even have some Enigma-style flute on "Out of Reach"!

“We were definitely talking a lot about Enigma at the time! We were thinking of the time they went to Ibiza and made a mansion there…he [producer and main man Michael Cretu] was married to Sandra [Enigma’s vocalist] at the time, and they were building this palace there and having all these hits but then someone told them they didn’t have permission to build this thing…it took another year and then they had to rip the whole thing down! It was a really sad story and we were thinking a lot about it while also listening to their music….so it was definitely an inspiration.”

There's also the retro cassette tape artwork, and the Kylie pose you're striking on the cover...

“Yeah….that may be true! We had so many pictures taken for this; one of my best friends took millions of photos of me in Berlin while she was there one week. It wasn’t planned, the final pose, but it turned out amazing.”

It's been six long years since Don't Stop; will we ever get another Annie album?

“I’m now working on my next EP and single, and the plan is to do two EPs next year and an album the year after – so hopefully that’s going to happen! Even though I love the concept of an album, I don’t know if I really want to do it….I still want to do one album I think, that seems like a good idea.”

Endless Vacation is out now on Pleasure Masters