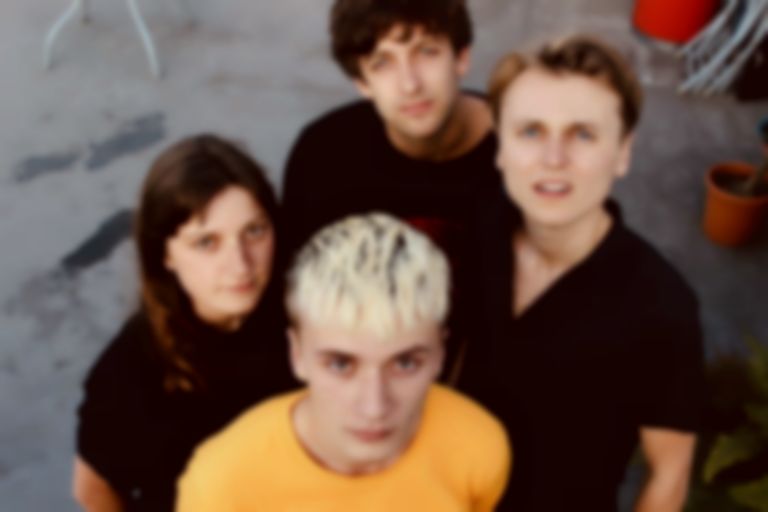 Post-punk affections collide with utopian contemplations and forge something of a spaghetti western love song dominated by a menacing Northern vocal on Talk Show's “Ankle Deep (In A Warm Glass Of Water)”.

A melee between banal and bathos, Talk Show's new one is spry, affectional and reminiscent of the sort of thing that soundtracks the end of a heavy night out – frenetic guitars offset with someone talking passionately and articulately about something that you’re not too sure about but you believe every word of (we’ve all been on that night bus), with emotions ricocheting all over the place. There's the feeling it could go one of two ways – a mass brawl or a mass love-in. And that’s exactly where Talk Show excel; bringing the apprehension and bringing the kinship in equal measure.

Frontman Harrison Swann says of the release: “On the surface ‘Ankle Deep (In A Warm Glass Water)’ probably appears to be a song that’s solemn, or filled with frustration. In reality, it’s more of a collage of different situations and feelings. It fell together and wrote itself, and I suppose that’s kind of what the song ended up being about. It’s a collection of lines knitted together, that seemed to naturally make sense next to each other. For any collage to work you’ve got to recognise all the individual parts, whilst simultaneously seeing the bigger picture and ‘Ankle Deep…’ is a reflection on this.”

Whereas their debut was relentlessly driven, “Ankle Deep” balances more beauteous shoegazy guitars with caterwauling choruses and showcases their slightly more delicate side, but all the while still punctuated by Swann’s urgent all-knowing vocal.

“We often lean towards artists such as Echo and the Bunnymen, and the goth stuff of the ‘80s,” continues Swann. “We wanted a bit of groove, but with some drive behind it all, and ultimately ended up somewhere between the Bunnymen and Roxy Music, with a bit of Blondie thrown in for good measure. ‘Ankle Deep…’ isn't just black and white, there’s loads of stuff in between. Which I suppose is the only, truly accurate description for the song.”

“Ankle Deep (In A Warm Glass Of Water)” is out today.