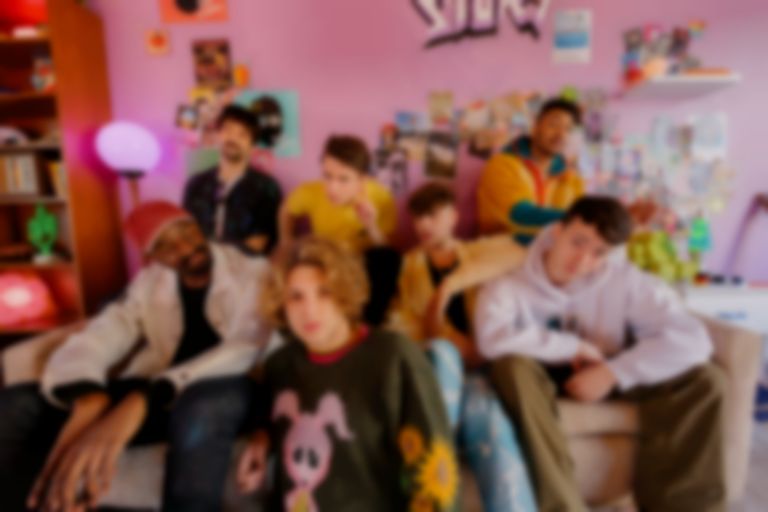 Photo by Samuel David Katz
Song Of The Day

Juice break new ground with “Superimposed,” taken from their forthcoming project, Boy Story, due to release this autumn. As shape-shifting an outfit as they come, the multi-faceted collective embrace genres from hip-hop to indie-pop and alt-rock and demonstrate their hybridity on their latest single.

“Superimposed” kicks to life with glittery synths and an opening verse from lead vocalist Ben Stevens that’s awash in nostalgia yet also of the present moment. The single looks at precisely what happens when your reality informs how you view another person, even as damaged as each person’s world might be at the start.

It bursts with energy, shifts, and kicks into gear, with a chorus featuring five of its members - lead vocalist Ben Stevens, vocalist and violinist Christian Rose, and guitarists Kamau Burton, Daniel Moss and Michael Ricciardulli). Delivered as an introspective punch, they sing “All the time, I knew that I was really fucking crazy, just like you. Kaleidoscopic in its nature, “Superimposed” is complete with a thumping bassline and danceable synths and guitar riffs.

Speaking on the track, Rose of Juice says “In the fall of 2020, we isolated ourselves in Killington, Vermont, where we worked on dozen of new song ideas for our upcoming project Boy Story. One night towards the end of October, I stayed up all night in my bedroom demoing out an idea in Logic Pro. I had a chord progression, an obnoxious little synth line (which is still in the final version), and some cool lyrics about how complicated it can be to think about an ex.

“It became an interesting alt-rock/synth-pop/hip-hop collage, and when I showed it to my bandmates the next day, we all decided the idea was worth pursuing," he continues. "The guys injected their various talents and writing perspectives over the next several days, and ‘Superimposed’ was born.”

Rose further lends his voice to the second verse, delving into the relationship and reminiscing that “I don’t know if pages of apology can make it better.” Accompanied by the vibrant music video, the band can be seen partying and dancing in sync, as well as being quite literally superimposed on the backdrop of a blue sky.

"In the ‘Superimposed’ music video, my character runs through the woods away from something, before he encounters a barn. Inside of the barn, there’s a strange, dreamlike party going on.” Rose explains. “The video was filmed by Logan Regnier, and co-directed by Logan Regnier and myself. We shot it at the barn on our AirBnb’s property in Orleans, MA, on Cape Cod. We worked tirelessly designing sets for 'Superimposed' and the other videos of 'A Boy Story: Crisis in Parallel' - the video series that's accompanying our upcoming project. If you stay tuned, you'll see how we built a whole universe around this little barn on Cape Cod."

The project follows on the heels of the 2018 EP Workin’ on Lovin’ and 2019’s EP, you are simply magnificent. With a new project on the way, “Superimposed” marks an early glimpse of their latest sonic world.