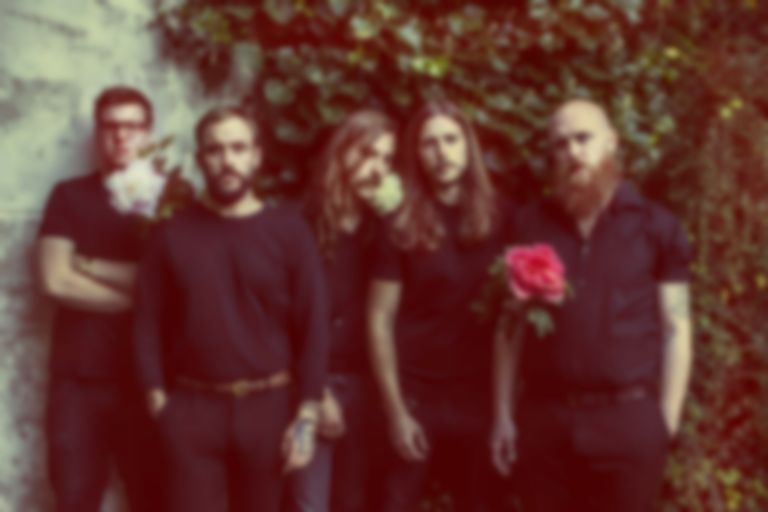 Bristol post-punks Idles have detailed new EP MEAT, and are sharing the visuals for lead single "The Idles Chant" on Best Fit.

A few years back, their roughly hewn pop-post-punk sounds on debut EP Welcome captured our attention. It was stark, nonchalantly aggressive, and, crucially fun - they brandish visceral aggression with singalong melodies. Then Idles seemed to vanish, lobbing out the occasional eggcentric clip and playing the odd show every now and again.

Now they're back - leaner, meaner, and raring to launch a new EP into the wild.

Frontman Joe Talbot answered a few questions for us about what they've been up to, and what they're gonna be getting up to. It all looks very exciting. Get reacquainted with their first EP below, and then check out the Q&A and new stuff after.

For those that haven’t come across you yet, can you quickly explain your origin story?

We all met through the Bristol music scene, DJing and whatnot. Dev and I were running an indie night called Batcave and decided that we should start a band. We knew each other longer than the rest of the boys so could put up with how fucking awful we were. Since then it’s been beautiful. We hate each other half the time, but it’s still beautiful.

What have Idles been up to since we last spoke many years ago? Things seemed to go a bit quiet…

We've been writing and practicing 12 hours a week to become a more airtight and venomous band. They've only been quiet on the live front but like a swan we've been paddling like fuck under the surface.

It’s been three years since Welcome - how have you evolved as a group since then?

We're better friends. Our music is more accomplished; in that we're more succinct with our message and sound, plus Bowen's not around to fuck around with pedals as he lives in London now. In short: we're much better and a shit-tonne heavier on record and live.

What can people expect from the new MEAT EP?

Four songs that tried to capture a mood at a time of great despair. It's called MEAT because the word was at the front of my mind after we recorded it; like many things that just seem to pop up, it was perfect. 'Meat' is a word that sums up our existence perfectly. We are lumps of imperfect meat.

What’s “The Idles Chant” all about?

We just jokingly said we'd write an Idles chant to honour The Monks' chant that they recorded live on German TV, and that was the first thing we came up with and we loved it. We recorded it with our producer Paul Frazer in Wandsworth with the rest of the songs. It was the most on-point session we had.

The video’s also an homage to The Monks – what do you love about The Monks? What made you want to pay homage?

I love their naiveté and their unabashed approach to experimenting. Many bands from the sixties seem naive or clumsy now, but that’s a beautiful thing... culture is eating itself and way too obsessed with its own image nowadays. It's a celebration of a belligerence to have fun and explore yourself.

Why should people come to the EP launch?

They should come to the EP Launch because both the Bristol and London dates have supreme bands supporting us and we are very good live. Our EP is also nice as fuck so come and be with us.

How do you feel about playing with METZ and Protomartyr?

They're one of my all-time favourite bands and so are Protomartyr; being asked to support them is a dream, genuinely a dream.

What’s next for Idles?

In the words of Wilfred Penfold, We're going to work hard and be nice to people. Plus an EP, four albums, a knife fight and a hip hop side project called Millennium Culkin.

Watch the video for "The Idles Chant" below. The band's MEAT EP is out 30 October. They've got some shows planned, which you can check out after the vid.