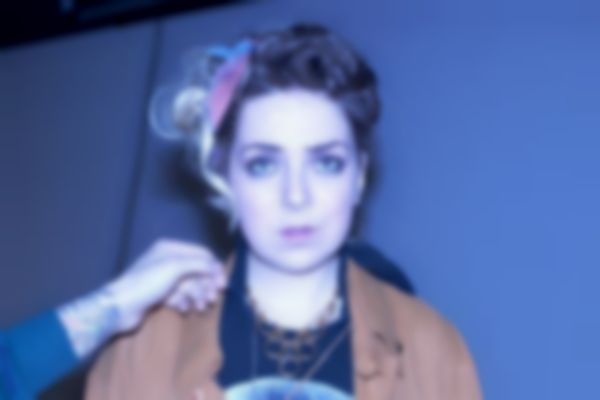 The first time I met Mozart’s Sister – or Caila Thompson-Hannant as we were introduced – I cried on her for about twenty minutes. It was last year at SXSW and I’d had one too many tequilas. What can I say? She was pretty relaxed about it.

On returning home I thought it at least polite to give her music a listen, but all I could find online was ‘Dear Fear’, a staccato sweep of darkly intriguing, if not slightly questionable lyrics (we’ll come to those in a bit), and a soaring vocal that brought to mind Cyndi Lauper, side-ponytails, and playing Dream Phone.

Skip forward twelve months and she’s got a four track EP just out via trendsetter label Merok, has spent the last three weeks holed up in a London studio working on her debut album, and is about to support Dan Deacon at Shoreditch’s Village Underground. Oh, and it’s also Valentine’s Day, her stage aptly decorated with helium filled foil balloons, ‘I love you’ emblazoned on the largest.

We decide to head for the nearest, cheap Vietnamese in the hope its speedy, plastic service may mean a table being available on probably the most popular day of the year to dine out.

Seated, talk quickly turns to London, a city she describes as beautiful, but one she’s had little chance to take advantage of due to a heavy studio regime. So what was her thinking in flying over 5000km for something that is surely available in her hometown of Montreal? “A lot of reasons,” she asserts. “Some are just logistical with management and some are just because I wanted to get out of my comfort zone, I really believe in that. I’ve been working on these songs for a long time but I’m kind of at the point where, it’s sort of like a plateau where I didn’t know what I wanted to do with them. It’s opened up a new chamber in my mind for what I want to do, musically, that I wasn’t even that in tune with before.”

We talk about the self-motivation and discipline that’s required to work solo and I confess my own tendency to lose focus should a mealtime be anywhere in the near future. “Food is one of the hugest hurdles,” she emphatically agrees. “Seriously. One of the hugest barriers in the creative process is food. I swear to God. Honestly, when I’m home and having a creative day or whatever, I would wake up and be super energetic, make coffee, work for like, two or three hours…”

A waiter comes to take our order. “Food is getting in the way right now,” she deadpans, before picking back up. “I really find the morning to be productive and then I just get hungry, honestly, and I’m like ‘fuuuuuuck’. I’m just so angry, like why can’t I just drink coffee all day and be satisfied?”

Caila has been working in the 4AD studios in South London with the in-house engineer, even putting in the hours on her birthday, albeit with a little fizzy wine. Working with another person is an experience she enthuses over, as well as the encouragement to keep going for up to 12 hours straight. But how has she found sharing personal ideas? Does she ever feel shy bringing her unfinished work to another set of ears?

“I can be shy,” she nods. “I felt shy at first, being here. I find that when I’m working on a new idea with somebody around, I can sense that my flow is off thinking about them, so usually it’s just easier for me to be like, ‘Let me just go do this myself for 15-20 minutes and then I’ll be back.’ It’s sort of shyness and it’s also, you have to shut your mind off a little bit sometimes, to get into things.”

I offer that she certainly doesn’t come across as being too shy. The aforementioned ‘Dear Fear’ containing the lyrics, “I sleep all day and I crank all night.” I double-check I’m not mishearing and she confirms my first thoughts while I break into giggles.

Caila: Crank? Crank all night. I don’t know what it is. Is it something?

Best Fit: Yeah, a crank is like crying and wanking at the same time.

Best Fit: Yes it is.

Caila: Well that sounds great to me.

Best Fit: Did you not know that?

Caila: I didn’t know that.

Best Fit: Well, what did you mean by crank then?

And with that I’m crying again in the presence of Mozart’s Sister, although this time it’s for slightly better reasons. Moving on, we talk about comparisons (she doesn’t care who you compare her to) and contemporaries.

There has been a recent explosion of Canadian artists finding fame on UK stereos. I ask whether Caila finds this a trend she’d like to take advantage of, or a hindrance, to be lumped in with a musical group just because of geography. “It would never be a hindrance.” She pauses for a while, “I’m not sure… I think that in Montreal, for me as an artist, it’s very helpful because those guys are always raising the bar. We’re constantly inspired by each other and it feels great to have a peer group of people that are quite diverse, musically. But we all really love each other’s work and are supportive.”

Live, Caila is like a little bit Grimes, like a dirty Mariah Carey with a chaos pad, all sass, effects, and threateningly powerful voice. She describes playing as, “Connecting with some sort of force, some sort of time and energy,” and no longer worries about criticism that it might be a ‘karaoke’ style of playing over backing track, “It’s just more normalised now. It’s like, who cares?”

She’s appearing at this year’s SXSW festival in Austin, Texas and taking a backing vocalist a long for the ride, as well as a few shows in major North American cities, but what about the future? Are there any plans to bring in more musicians? Or even an extravagant stage show, get some distracting food involved?

“You know what I did once?” She leans in, already cracking herself up. “I brought a carrot on stage from backstage and pressed the first pad on a song I was starting to play and then took a bite of the carrot and then was actually chewing the carrot and I was like, ‘Why the fuck did I do that?’ It was so ridiculous. I had to start singing, but… I was just really relaxed that show.”

I can’t imagine any other way Mozart’s Sister could be.