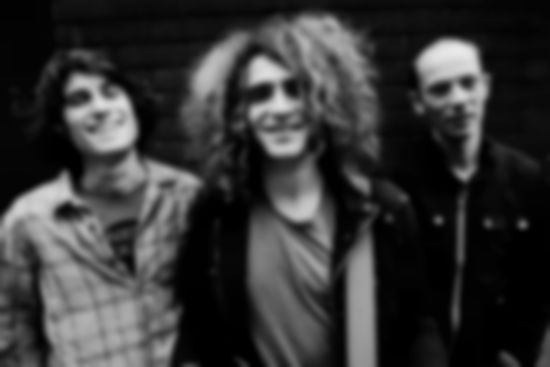 In an ambitious sonic experiment that must rival the finest efforts of CERN’s subterranean scientists, the genre-smashing Geneva-based Mama Rosin conjure an explosive fusion of trashy transatlantic zydeco and garage rockabilly ‘n’ roll. From the high octane heat of their first two albums to the voodoo jazz of 2009′s Black Robert, this Franco-Swiss three-piece possess raw flair and a distinctive, exotic sound that takes many forms – all of them noisy. Living on a communal farm where, in between albums and running a record label, they grow their own food and brew their own liquor, this is a band that seem to have life pretty much sussed.

After a slew of UK shows last year, including appearances at Glastonbury, Summer Sundae and the Cambridge Folk Festival, the band return to British shores for more festival dates this summer. With a fourth full-length release due later in the year, co-founder Robin Girod gives Best Fit the lowdown on Mama Rosin’s raison d’être, new direction, and life on the farm.

Hi, Mama Rosin. Let’s start with a who’s who… you’re a trio, so what do you each do in the band?

Hi! Mama Rosin is a Swiss/French trio: me (Robin) and my brother Cyril are the driving force behind the band. We started as Les Frères Souchets five years ago. Xavier joined three years ago and we became Mama Rosin: one foot in France, two feet in Switzerland. We are francophone, we sing mainly in French, though it is old Cajun French!

Cyril plays this little accordion from Louisiana called a melodeon. He plugs it in order to get a rough trashy warm sound. He also plays the fiddle and the guitar. He plays triangle as hell… sorry as well. Me, I play the guitar, and the 5 string banjo, but not in a bluegrass way. I play the old style like the black banjo players. I also use a washboard called a frottoir. And in studio I play keyboards, slide guitar, and bass. Xavier is a multi-percussionist, a very good drummer inspired by African beats mixed with trash rock’n’roll! He can also play harmonica while beating the drums and sings when we need a choral!

Altogether we try to create a full sound. Sometimes people tell us after the show they don’t understand how we can make such a big noise with only the three of us on stage…

You describe your sound as being “Louisiana south rock‘n’roll voodoo music”, which is certainly a heady mix… anything missing from that description?

We are fascinated by the history of music and we are vinyl obsessed collectors! We listen to all kinds, most of it is old and forgotten. And we dig vinyl wherever our tours take us. How do Africans bring their rhythm to a new continent? How does music change between Brazil, Colombia, Caribbean, Mexico, Louisiana? All these genres are linked somehow and they are a huge source of inspiration. We learn from them, we take from them and we bring them into our mix. Our sound finds its roots in old music. Who knows?! I might introduce one day a ‘Louisiana south rock n roll voodoo tropicalia exotica summer feeling jazzy’ music!

But Louisiana is a long way from Geneva! Is Swiss zydeco your own creation, your own niche? Or is there a burgeoning scene we should know about?

There is a strong musical folklore in Switzerland, but it is not really our cup of tea. So we looked for something else. We jumped over the borders and we found our musical and spiritual home in Louisiana! That’s true. The link we have with the Cajun population is our farm, located next to a ‘Swiss’ bayou, full of mosquitos! Some Swiss friends play good bluesy music but I think it is correct to say that this R’n’R Swiss Louisiana sound is Mama Rosin’s own creation, yes…

Funnily enough, Mama Rosin have an increasing number of fans in Louisiana. They think it is crazy they should come to Switzerland to find a Cajun band playing with the real spirit from the early generation of Cajun musicians and they want to know how, why and when we decided to distort the music from Louisiana! They like the fact that young people from another part of the world are giving a second life to their old music!

What do you think makes Cajun/zydeco rhythms so infectious?

‘Infectious’ is a very good word to describe this music, and difficult to translate in French. Cajun/Zydeco music smells of sweat and spices. These people were living in tough conditions in the bayou: hard land to cultivate, hard place to build houses, and hard to circulate, and not the most natural welcoming environment either! Their music reflects that. They shout their misery, they mistreat their melodeon and guitar and they sing about their pain! These guys play tribal beats, on drum and/or frottoir, while on accordion they play hypnotic melodies! That’s punk, that’s rock’n’roll, that is Louisiana sound man!

There’s also a strong garage rock influence on your music – what gave you the idea to fuse these styles?

I like the haunting sound of 60s guitars, old amps with tubes which give a warm sound, when the reverb is in the red, and the volume too. When I listen to early guitar solos from The Kinks, The 13th Floor Elevators, The Small Faces, I go crazy. You can feel their blood beginning to gas and their fingers ready to explode! They planted a seed in my head. We played garage rock when we were teenagers. But, it wasn’t really an idea… it just happened… it came out like a combo of all the influences and styles of music that we have absorbed over the years.

The new album is called Bye Bye Bayou and will be released in October. ‘Seco E Molhado’ is the first single taken from that forthcoming album. And yes, it sounds different. Jon Spencer asked to produce this album, and hey we are big fans of his music, so it worked for us! I think it is fair to say that Bye Bye Bayou reflects the way our music has been evolving since the release of our last album recorded 3 years ago. And by working with Jon, we were able to explore these directions further. You will hear violin, farfisa, vibraphone, organ, and a lot of different guitars. We really worked on the sound. Funnily enough though, after a few days working with Jon in the studio, he said to us, “ah, that Louisiana sweat will stick on you forever!”

Your recordings often sound very rough and raw. Is it true that your first label wanted you to play “more trashy”?

Yeah! Reverend Beat-Man, proud owner of Swiss legendary Voodoo Rhythm Records (totally trash and rock’n’roll) likes to catch the moment. He likes to play loud and powerful, even if you play a slow song! We totally loved the recording sessions. They were 100% live and he really pushed us to our limits! We did a few takes, just enough to capture the feeling and the emotion of a song. If I broke a string, I would continue as it gives something unexpected and magic. And we recorded on tapes!