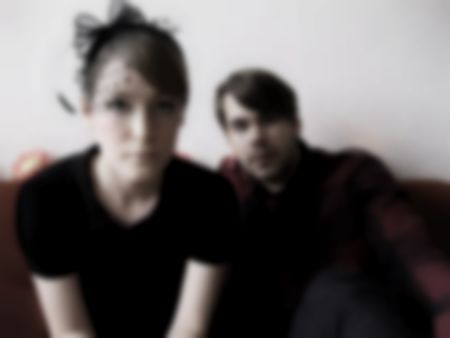 The Forest & The Trees are Joel and Linnea Edin, they live in marital bliss at their apartment outside of Stockholm, Sweden where they sleep, eat and create spectaculary joyous pop music. The couple started making music together whilst recording a Christmas CD-R for their friends and are currently busy working on their debut album which is currently being touted for a late 2009 release. Some eagle eyed folk might also recognise Joel and Linnea from the twee-as-can-be Tupelo Honeys (reviewed here), in which Joel’s sister Linn completes the lineup.

Fans of Loney dear, Taken By Trees, The Sundays will reep great rewards from downloading the three tracks at the bottom of this post. ‘Circus Lonely Hearts’, ‘Mother’ and ‘I Need Some Peace’ all contain the vital ingredients necessary for a perfect pop song. The fact that they’re Swedish also helps the cause – because, as you know, anything that comes out of Sweden generally has a major *WIN* tag attached. On ‘I Need Some Peace’ the duo are hugely reminisent of the aforementioned Loney dear, no suprise really as bass player David Lindvall is the producer. Expect escalating choruses that spiral into euphoric highs – with shuffling drums, tinkling glockonspiel, and lusious harmonies. Lovely.

TLOBF are hoping to bring the duo over to the UK later in the year for a show or two in London, we will of course, keep you posted with any progress. For now though, I’ll leave you in the capable hands of Joel and Linnea as they tell us a little more about what makes The Forest & The Trees tick.

Can you recall the moment when you first decided you wanted to become a musician?
Linnea: When I was eight and wrote a song about fruit and it’s various qualities. I knew I had it.
Joel: When I was three and got my first guitar. It was made out of plastic but I wrote songs all day and slept with it on my stomach at night.

Where do your songs come from? What’s your inspiration?
From the forest and the trees, the city and it’s people.

What was the first gig you ever played and was it a success?
We’re leaving the studio to play our first gig this Sunday!

What one piece of criticism has stuck in your mind and was it justified?
When we started up we made a few songs without deciding on a particular sound or direction for the music. Our friend Dave the Brave told us off and we shaped up. Thanks Dave!

What one thing has caused you to waste your free time in the past 6 months?
In December-January we were obsessed with the Sopranos. We watched all six seasons in a few weeks and hardly left the couch. Dangerous stuff, steels your time and creativity, but with a series as good as that you have to keep watching!

If you weren’t making music, what do you think you’d be doing?
Linnea would try to improve her poor painting skills and Joel would probably watch more football and make weird movies.

What’s the worst job you’ve ever had?
Linnea: When I worked as a fund-raiser for two weeks, humiliating myself trying to make people sign up for monthly charity in Stockholm city.
Joel: When I worked as a cleaner one summer and had to clean toilets all day long.

We’d like you to make us a mix-tape. Pick five tracks with a theme of your choice.
The theme is “actors/musicians”, actors who make a brief career as musicians, or musicians who also turned out to be decent actors.
Scarlett Johansson – I don’t want to grow up
Elvis – In the ghetto
Vanessa Paradis – Be My Baby
Dolly Parton – Here you come again
Björk – New World

The Forest & The Trees on MySpace