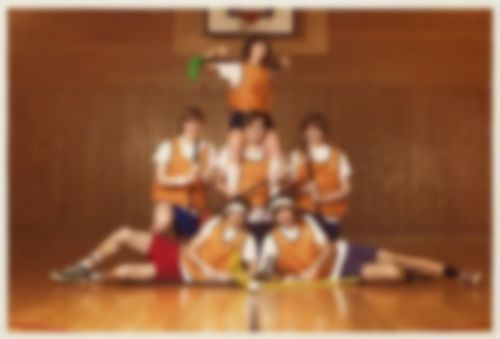 Formerly the “one man band” of Marius D. Hagen, Team Me are exporting their orchestral pop to the UK for tonight’s Ja Ja Ja clubnight after being invited by TLOBF’s Rich Thane. Noting Norwegian black metal scene among their influences, the multi-instrumental six-piece told Sharon Kean they are excited to be returning to British shores just ahead of the release of their debut EP.

Hello from England, Team Me. You were recently over here on a brief tour with the Wombats and before that played a few shows with British Sea Power, how did it all come about?

Hi! We were lucky enough to play the Camp Indie tent at last year’s Øya festival. There, somebody saw us and invited us to play at the Unconvention festival in Salford, in October. Which was great! There we opened for British Sea Power. They and their manager liked us. We kept in touch, and they asked us to join them on a couple of shows.

As for the Wombats tour, I’m not completely sure. Our long time friend, Tord plays bass in The Wombats, so I guess he mentioned us to their management. They were already familiar with Team Me, since Marius and Tord have a project called SiN together. So, they invited us to join part of the English and Scandinavian leg of the tour.

What was the audience reaction to your set?

The audiences have been amazing! They’ve really made us feel welcome, and they’ve been dancing and screaming and singing along. It’s been such an honor to be a part of these tours, and to meet all the great British Sea Power and Wombats fans. So, a big thanx to all of you!

I read that you began life as Marius D. Hagen’s “one man band” and grew as live performances started happening. Have the different members/musicians shaped your sound?

Definitely, this is no longer a solo project. The foundation for the songs is still Marius, but we arrange them as a band. And they grow and develop as we rehearse and play them live. Everyone has different ways of playing instruments, and we switch instruments during shows. We all definitely bring our own personality to the band, both in terms of playing and energy. With the band being just a little over one year old, we’re still finding our way through the music. So, we’re excited to see where we’re going as we are gonna start recording our debut album.

Your music has been described as orchestral pop – do you agree? How would you describe it? Any strong influences?

To me, the Team me songs are pretty much straight forward pop songs, the reason why it perhaps sticks out a bit, could be because of the all the quirky arrangements and the somehow “odd” instrumentation. With sixpeople in a band, there are a lot of different things inspiring us, such as Norwegian black metal and Whale Safaris to mention a few.

You’re coming back to the UK next week because you’ve been asked by Rich Thane to play the Ja Ja Ja clubnight at the Lexington, along with Lucy Swann and When Saints Go Machine. How did that come about and how do you feel about it?

We are super excited! We`ve played with Lucy a couple times before and she is lovely. It will be our first time with When Saints Go Machine and we are all looking forward to meeting them.

Had you heard of the Ja Ja Ja night before – and what are your thoughts on it?

To be honest we hadn’t heard much about it before. But, we are excited to be invited and to play!

If you could put on your own Ja Ja Ja type show in Norway which bands would you book and why?

Your EP (out soon) is the first official release for Team Me but you’ve recorded music under other guises in the past. How does Team Me fit with that – and is it starting to take over/grow/gather momentum?

Some of us have played and still play in other bands/projects. Marius and Bjarne have been playing in a heavy-bluesy-hard rock band called Jaqueline for over ten years. Marius also has an electronica-pop project called SiN. Uno played in an alternative rock band called Wintermare, and also have an acoustic/spacey solo project and a hard core band called Twin Pines Mall. Anders has a solo project called Ludwig Moon. Simen and Synne have been experimenting with different instruments on their own, and also do a lot of videos and design. So, I guess we all have different elements and influences to put into Team Me. But, Team Me is definitely different than our other projects, and is the project that takes up most of our time now.

How does the record compare to the live show – i.e. do both involve the same musicians? Any notable differences between the two – what can we expect?

The band is the same on the record and for the live shows. The biggest difference between the two is that we try to limit the switching of instruments as much as possible, to get the shows to run a bit smoother. Although we all play at least two different instruments each, and sing. As in a recording environment we have no rules for what instruments we play, or who’s doing what. Marius mostly does the main vocals and foundation guitar, though. And Bjarne is most definitely the best drummer of us all.

And I hear we can we expect from the full-length album later in the autumn?

The plan is to start recording our debut album May/June. So, hopefully we’ll have the album ready for the autumn, yes.

What’s next for Team Me? Any festival dates this summer?

We have some festival dates lined up, mostly Norwegian, like Øya, Volum, Træna, Parken and a few more. But also The Great Escape in Brighton and The Spot festival in Denmark, in May. And still some others not confirmed yet. It’s gonna be a busy and fun summer!