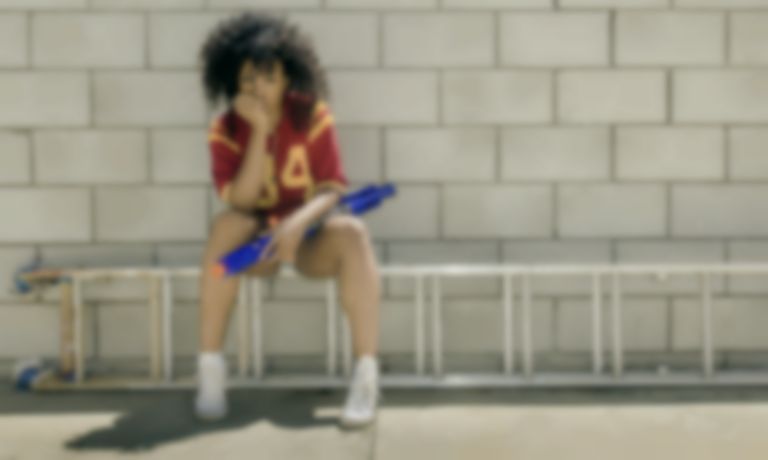 SZA, real name Solana Rowe, makes one kind of music: her own. As evidenced in her name she’s influenced by hip-hop greats like the Wu Tang Clan, as well as more soulful elements of urban music, including her hometown hero, Lauryn Hill, but what’s most interesting about SZA’s output in the past year is how she’s carved a niche for herself.

Mixing elements of heavy trap production, with spritely, gentle overtones on her two EPs See.SZA.Run and S, she calls this melange ‘glitter-trap’ – two words that a probably oxymoronic on paper, but perfectly compliment each other in song. Top Dawg Entertainment (TDE), the label home of the likes of Kendrick Lamar and Schoolboy Q, thought so too when they unveiled her as their most recent signing just last month. We caught up with her to get to know a bit more about SZA, from her conservative upbringing as ‘little Solana’, her love of Ella Fitzgerald and why guacamole is one of 5 words that can best describe her music.

How are you liking all this attention that you’re getting, especially after the two songs that you just released?

It’s weird, but I haven’t been stood still long enough to fully notice it. I guess I’ve been on Twitter and Instagram but…I’m always somewhere so I don’t really get the chance to sit still and enjoy it.

Tell us a bit about your background.

Maplewood, New Jersey is my stomping ground. Both my parents are a lot older, they’re in their 60s. It’s just a quiet small town, really chill. Like a move, kind of – like Pleasantville.

I read that you’d been brought up in quite a conservative household and as you just described – quite quaint surroundings. Would you say that your music is a rebellious response to this, or that it facilitated your imagination and creativeness?

I feel like when you’re from a quitter surrounding, somewhere that’s less mentally stimulating – with less outside stimulation than you would have in a city, like cars and buildings and noise – when you’re from a quitter place, all you have for mental stimulation is yourself, your backyard and the park. Just doing kid shit and forcing yourself to become imaginative. At one point, I think that changes everything for sure.

A lot of artists tend to say that their city influences their music. Would you say that about yourself ? One artist that I can think of from New Jersey is Lauryn Hill of the Fugees – would you say that you make different music from them because you had different experiences from them?

I don’t think I had that much of a different upbringing from Lauryn. I mean, we went to the same high school, she lived in the house behind mine. It’s crazy because I’d never really thought about it until recently but I imagine that we’ve had a similar upbringing. A lot has changed now because it’s a little more white-bred than when she was in high school but it’s definitely a similar experience.

Would you say that you make New Jersey Music, or just SZA music?

(Laughs) I definitely think I make SZA music. There’s a lot of crazy people coming out of New Jersey! So I definitely think it’s more like a SZA thing. But I have family all over the place, some in St. Louis, but I can’t say I make St Louis music either – I have no idea what type of music I make. I’m still trying to figure that out.

Do you remember the first artist that you fell in love with?

Ella Fitzgerald, for sure. I had the the Best of Ella Fitzgerald CD when I was like 8 or 9. My dad, he was a stickler for letting things get into your mental space – like what you watch and hear – so the only thing that I could listen to was whatever he listened to. So we listened to a lot of jazz.

What point did your love of music turn into “I want to make music!” Do you remember a particular feeling?

I want to say a year ago. And it wasn’t even that, it more so a love of finding a new part of myself – learning myself in a whole other way. Growing as a singer – I’d never had vocal lessons before. It’s kind of what drew me into music the in the first place, that self growth.

Would you say that you going into music isn’t just about music itself, but that you’re a generally creative person that’s inspired by a lot of things, and that music has just come to be your main channel?

What is glitter trap?

The glitter trap thing started because it was like 6am and I was uploading everything onto SoundCloud and I really feel that, genre wise, you should really just do what it sounds like. A lot of it had chimes, wind chimes and bells and shit. But there was all these like, heavy trap elements. And I was just like ‘this should just be called glitter trap’. That’s honestly what it felt like. But on this new album there’s this whole new like…alternative country. I don’t even know, I’m just going to label it whatever it feels like.

You’ve released 2 EPs as you yet, See.SZA.Run and S. How do you think those two EPs relate to each other, if at all?

Do you think that the difference in the two EPs is something that you can hear as the person who made them, but the fans can’t?

I do, I really do because my beat choice is completely different. I went from working with Brandon DuShay who is heavy R&B to working with Felix Snow.

Speaking of producers, why do you pick certain people to work with? Is there something about these specific ones that work with what you’re trying to achieve?

Some of them are by chance, it’s crazy. The only person I’ve ever chosen is Emile Haney. With Brandon DuShay, I just started stealing his beats off the internet! With Felix, I was introduced to him through a 3rd party – the music that we’ve made together is nothing like the music he’s made before; we cater it to each other.

What about your songwriting? I sense, when listening to your music, that it’s very poetic and otherwordly and very visual in a Janelle Monae type of way.

I just try to be as true to what my actual emotions are. If you listen to Bjork or Goapele, it’s about talking about how you feel in the actual moment. It’s like making music for you, really catering it to you. It’s not for other people necessarily.

Tell us about ‘Julia’ and ‘Teen Spirit’. How did they come about and what made you want to release them as the first singles?

I was excited about each of them separately. The beat on ‘Teen Spirit’ was crazy and the day that I recorded it, it was the clearest mental day I’ve had in a long time. It was really simple. And with ‘Julia’ I was riding in Felix’s car. He has this awesome vintage Jaguar that he just bought. We were riding on the highway, it was so sunny – it might have been Drake’s new song that was playing – and I was like, ‘I’ve been saying that we should make an 80s jam forever, we should just go and do one’. So we went back to his house and we literally just made an 80s jam in like 5 minutes.

So you are touring with Little Dragon. They’re the perfect match musically. How did that come about?

I love Little Dragon. It’s crazy 3 years ago I went to see them and I bum rushed Yukimi backstage and I was just like – ‘Hey!’ I was just a spectator then, she probably won’t remember. But yeah, she just asked me on Twitter, straight up. It was the most organic thing – it was just the most cool random shit that’s every happened to me. She was just like, ‘Hey let’s tour’ and I was just like ‘uh, yeah lets!’ (laughs)

So you dropped ‘Julia’ and Teen Spirit’ and then shortly after, it was announced that you’d signed to TDE. What did you like about TDE that made you want to sign to them?

I think it was like the lack of glamour. They record everything in a home studio and they just use the same people. Everybody is so real. They eat dinner together, they hang out together. They don’t trip, they’re not very flamboyant people, they’re very laid back. In the studio, it’ll be me, Ab-Soul and Jay Rock. We’ll all just be in there – it’s just like family time.

They all have their separate identities in the label, so it’s not like you’ll have to change your sound in order to fit in.

That’s for sure. They have a real high level of integrity – they don’t do anything that they don’t really believe in.

What music would you recommend at the moment?

Animal Collective – Daily Routine is probably one of my favourite songs. Bjork, Miles Davis - ’So What’ is a song that I love. Ab-Soul’s about to drop a new record which is insane. Drake’s dropping some hot shit lately. Other than that I’m pretty lazy in terms of new music.

I was just talking about this the other day. Like, it’s almost overwhelming. The influx of music is so intense, it’s almost…violent (laughs).

If you could describe SZA in 5 words or less, what would they be?

It’s my only food group!