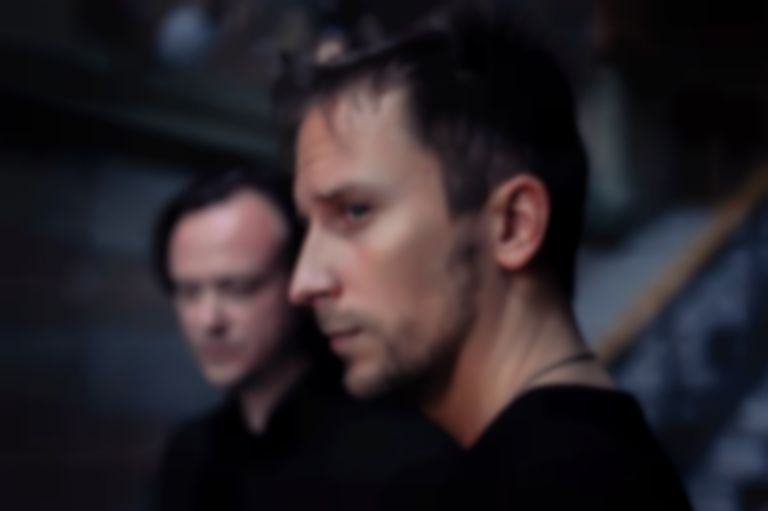 Sin Cos Tan are designed exclusively for a digital interface; that’s not to mention trigonomic functions on a graphing calculator, but rather the Finnish synthpop duo consisting of Jori Hulkkonen and Juho Paalosmaa, who are well-suited to these MIDI-val times of artificially-inseminated sound.

Having been raised on music of such an idiom – i.e. eighties new wave full of affected beats and racks of synthesizer keyboards – Sin Cos Tan estimate that it’s only a matter of time before crossfades and software effects are regarded with the same integrity as any given shredding guitar solo. And their music is their virtual guarantee. Emphasis on the virtual. As they boot up their CPUs for their upcoming Ja Ja Ja performance (29 November at London’s The Lexington), we catch up with Sin Cos Tan to find out what operating system they run on.

Can you tell us about how the two of you met, and when you decided to form Sin Cos Tan? How did you choose the name?

Jori Hulkkonen: A few years ago I came across Villa Nah’s Myspace-page and was immediately convinced that they’re the next big thing, and booked them to play at a club in Helsinki where I did a small weekend festival. Their live show further enhanced my initial notion and also got them a record deal with the legendary Finnish label Sahko/Keys Of Life. I was the obvious choice to produce the first EP and their subsequent debut album, Origin.

The idea for Sin Cos Tan came about a year ago as we both had musical ambitions we felt we shared and wanted to pursue.

Coming up with a name is always so hard, we had dozens of candidates, but it was Juho who suggested SCT, and we were instantly amazed that a band named Sin Cos Tan didn’t exist

What kind of records did you guys surround yourselves with prior to forming Sin Cos Tan? With this project (and Villa Nah before it), I’m sensing a lot of new wave/synthpop influences along the lines of Pet Shop Boys, Eurythmics, New Order…

Jori: I guess if you make electronic pop music with a bit of depth, strong vocals and nice production people will always compare it to the pioneers, and in a way it’s a compliment.

People making rock have it easier as the audience and the journalists who were there on the first wave in the 50′s & 60′s are not so active anymore; for most people rock has always existed and hence new rock bands don’t really need to justify or explain that guitars and drums sound like guitars and drums.

I guess in 20-30 years from now synth pop will have the same status; synths do sound like synths and drum machines sound like drum machines. Naturally the sonic palette is a lot broader with electronics, but if you want to make music that’s approachable you don’t want to get too experimental. Trust me, I’ve been there too.

Anyhow, obviously Depeche Mode, Pet Shop Boys and New Order have been huge influences for me in terms of even starting to make music in the first place. While making this album though, we were listening to a lot of very cool contemporary electronic stuff, such as New Look and Chairlift. Not sure they influenced the album directly, but these albums had some sort of freshness that I wanted our record to have, too.

Can each of you tell us about your musical backgrounds and the other projects that you are/were involved with?

Jori: Are you sure? It might take a while as next year it will be the 20th anniversary of my first release, so I’ll just tell what’s happening now. Now in September I released my 13th album, Negative Time, on the Canadian label My Favorite Robot. Also collaborated with the Italo legend Fred Ventura to cover Jens Lekman’s ‘Pocketful Of Money‘ as Stop Modernists. On the previous Stop Modernists single I had Chris Lowe of the Pet Shop Boys on vocals. I also have a concept EP coming up with John Foxx, and we already have one of the songs remixed by David Lynch. Coming up next year, there’s a lot of music coming out, both solo efforts and collaborations, including new stuff with Tiga. And then there’s the DJing.

Juho Paalosmaa: I sing and write songs for a band called Villa Nah.

‘Bittersweet’, much unlike ‘Trust’ and ‘In Binary’, is driven by guitar lines. Can we expect a mix of electronics and instrumental in your forthcoming debut album?

Jori: No, it’s quite electronic. One of the key points of the album was to have Juho’s strong and flexible voice juxtaposing the synthetic soundscapes, an approach I’ve always found appealing. But just to make the album a bit more versatile we decided to keep the guitar in the track, as that’s how it was written. Also, on another there’s a sexy sax solo.

How do find the music scene in Finland to be? Do you find that it’s a good, supportive place to be a musician?

Jori: I guess now in 2012 it’s not so bad. But when I grew up in the 80s and even in the 90s the industry has always been about Finnish music, sung in Finnish, for Finns. Music as an industry for export – as opposed to our neighbours the Swedes – is a surprisingly new idea, and having music, especially slightly marginal music never really seemed like a smart career choice. But I still see the scene as very conservative, a lot of bad hard rock that’s just a pastiche of the Eighties. Lordi and the Eurovision anyone?

However, we’re only 5 million people, and with that in mind there are some interesting things happening.

What does making music accomplish for you? Are you exorcising stray feelings, compelled by music itself, or perhaps a bit of both?

Jori: Actually a lot of both. It’s not really by choice I make music, it’s an obsession I’ve had for 25 years, and it’s not getting better it seems. I guess anyone who has a hobby or a job that doesn’t feel like work, is rewarding and gives you the feeling of accomplishing some sort of personal growth (yikes) knows what I mean. And if you don’t, it can’t really be explained.

What, if any, major epiphanies have brought you to where you are currently?

Jori: I guess the initial realization back in the 80′s that you could make music alone with just a drum machine and a synth. After that it’s just been hard work.

Juho: Probably when I tried playing an analogue synth for the first time. Also, I remember hearing some pretty simple yet catchy synth/electro tracks back in the day and thinking “I could try that”.

Do you try to distinguish yourselves from your peers in any way, or do you just let your music speak for itself?

Jori: The first one is definitely the wrong approach. The minute you start looking at what other people are doing and making decisions based on that and how you could distinguish yourself from them, you know you’re not doing it right. During my years in the “business” I’ve seen a lot of artists painting themselves in the corner in their heads just because they follow too much what’s going on around them, and that’s the lamest reason to get stuck on creativity.

In what settings, performance-wise, do you find your music is best-suited?

Jori: Judging by the very few shows we’ve played so far, I have to say big festivals, small clubs, and showcases.

Are you looking forward to your forthcoming Ja Ja Ja performance?

Jori: I think so. It will be our first show outside Finland, we were supposed to play in New York the weekend before but were forced to cancel due to unforseen circumstances caused by Hurricane Sandy.

Who responds to your music the best?

Jori: Good question. So far friends and family as the album isn’t out yet so we’re yet to find out what our fanbase looks like, or if we even have one. Having said that, my pet turtle really likes ‘All I Ever Dream Of’.

What does technology mean to you? Do you think you’d still be compelled to make music if this were the Sixties?

Jori: I’m bit of an antisocial person so for me electronic music was a revelation in two ways; firstly you didn’t need to be a musician in the traditional sense to be able to make music, but more importantly you didn’t need other people around you, and you didn’t need to make compromises. With age I’ve come to appreciate things on a bit of a wider spectrum, but to answer your original question, it’s very important, and I doubt if music would be my primary outlet if this were the 60s. An educated guess would be that I’d have been either a farmer, factory worker, poet, scientist or a soldier.

Juho: I’d try but I fear the Sixties would have me lost in a sea of free love and drugs. Thank god for technology.

Who are your heroes?

What do you do outside of music – in terms of work or any peripheral interests/curiosities?

Jori: Not much, I’ve been doing this full time for the past 15 years, and that really means full time. I also do my own radio show for the 14th year now and write the occasional column in Finnish papers, and naturally DJ a lot during the weekends. In my spare time I usually listen to some records or make some music.

Juho: I try to get by, make ends meet. Being boring.

Where do you find the best catharsis – in catchiness or swollen grandeur?

Ja Ja Ja will take place on Thursday 29 November at its home of The Lexington, featuring performances from Denmark’s MØ, Finland’s Sin Cos Tan and Norway’s Highasakite. Tickets are £5 in advance and can be purchased here, and for more information on the event, head over to Ja Ja Ja November’s Facebook page.