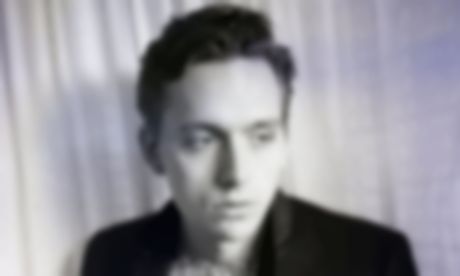 Listening to Gabriel Bruce, you’d be forgiven for believing he was a man much older than he is.

This deep voice comes from the mouth of a man who is a mere 23 years old. He was born and raised in west London, he briefly had an angry goth band called Loverman, but now he’s forging a career as a solo artist and releases his debut album ‘Love In Arms’ in 2013.

His voice suits all manner of musical styles, on ‘Perfect Weather’, he builds to a climactic wail; he’s a seductive sleaze on album track ‘Zoe’ and tortured crooner on ‘All That I Have’. Whilst his inspirations are clear (he cites Iggy and Bowie as people he “stole from”), he works hard enough to have made an album that is distinctly his own. ‘Perfect Weather’ for example, is a flawless pop song accompanied by a suitably dramatic video.

We talk to Gabriel about the creation of the record, his influences and about how he maintains such a crisp, low singing voice. Fans of baritone read on…

Where did you record ‘Love In Arms’, who did you work with and how long did it take?

I made the record at the Garden, a studio in London, with Craig Silvey. We spent two or three weeks recording and two weeks mixing.

Were the songs all written beforehand or did some last-minute inspiration occur in the studio?

The songs were all written before the sessions except for ‘Sermon on the Mount’, which had existed as an acoustic ballad of sorts, I then rearranged it to be played on the organ as there was a nice Hammond in the studio and it deserved a place on the record. I wrote ‘Greedy Little Heart’ at home during the sessions; I’d wanted to save it for the next record but had a lot of pressure from my label to include a more accessible song.

Was it recorded as a full band?

No, mostly I play the instruments, we had a great set of horn players come in and I got my friend Adam Predergast, who’d previously play in my old band with me to play bass. In my opinion he’s the best bass player around.

Your album ventures down many different musical paths, ‘Zoe’ is a dark disco song, ‘All That I Have’ is a forlorn piano ballad. How do songs of such different styles take shape to you?

I try and allow each song to wear the clothes that best become it. Once I’ve written the song it’s usually pretty clear which way it wants to be played and with my limited skill, I do my best to serve its needs.

What did you listen to when you were making the album?

I don’t listen to other people’s music when recording; obviously I had some references for sounds that I would play to Craig and vice versa. We stole some ideas from Iggy Pop and David Bowie, a bit from Dave Sitek. I’ve always liked Julian Casablancas’ vocal sound so we compressed and distorted my voice quite a lot and cranked up the high end. Craig played me Steely Dan and Talk Talk for the first time. I also remember that ‘Apocalypse’ by Bill Callahan had just come out, that’s a great record, beautifully mixed, the vocals are very dry and prominent, Craig would keep reminding me of it every time I tried to put more reverb on my vocals.

How do you know when you have a song that you want to record?

These days I record at home so most songs get recorded before they’re fully written. It makes me a lazy writer though, so many songs remain unfinished.

Loverman, your previous band, had moderate success with ‘Human Nurture’, what happened to make you split up?

They had a very theatrical, sinister sound (the video to ‘Crypt Tonight’ is pretty terrifying). You have carried some of this over in to your solo work, do you think you have unfinished business with Loverman?

Yeah, I think that side of my writing will always be there, I’ve been able to explore different avenues as a solo artist, which would not have been possible with that band. The problem with being in a band like that is you’re confined to one sonic vernacular; you’re a heavy rock band and so you have guitars and drums and you bark and roar. I couldn’t see past the image we’d created and I think maybe it was those constrictions that suffocated the band. That said, I listened to some Loverman recordings the other day and was pleasantly surprised, it’s a shame it ended, we were a good band, I considered putting the music up online but no one cared then and no one would care now so I thought better of it and tucked the songs back away in obscurity where they are destined to be.

Have any unused Loverman songs been used on the new album?

How would you describe your sound to someone who’s never heard it before?

I wouldn’t. Or couldn’t. Sorry.

Your voice is in a very low register, is that natural or is it something you’ve tried to affect (Tom Waits used to smoke copious amounts to achieve his gravelly burr).

Nero drank leek soup. It’s no coincidence that the Welsh are such magnificent singers and their emblem is the leek. Leeks, onions and garlic all improve the timbre and extend the range of your voice. That’s the trick. The cigarettes help too.

Your recent single ‘Perfect Weather’ is accompanied by a video of you dancing wonderfully on the white cliffs of Dover, whilst bleeding heavily from a cut on your body. Did you enjoy making the video? Was it choreographed or improvised?

It was choreographed by Nando Messais, he and I worked on the movement together drawing heavily on once piece of dance by Pina Bausch. Jacob Perlmutter, a good man and talented filmmaker, directed the video. We made it for very little money but were able to get some hold of some 35mm and a good camera for free as well as a very accomplished and talented crew, I’m indebted to them all and proud of what we made.

In October you completed a short headline tour, and you played with Peace in December. Do you have any plans to tour more extensively? Maybe in larger venues?

I’d like to go on a more extensive tour but don’t think it would be a good idea to play larger venues, there’s no demand for it. It’s demoralising enough to be playing to three people a night in small rooms, I think it would be uncomfortable for my small audience to have to stand in big halls with all that extra space.

I have to support these young bands to try and leech a little blood from their audience, people really like them, they go to their shows in their hundreds, my hope is that someone will get confused and buy some of my merchandise by accident.

Gabriel Bruce’s debut album Love in Arms will be released on 11 February through Mercury Records, and you can catch him playing at Hoxton Bar and Kitchen on 05 February.