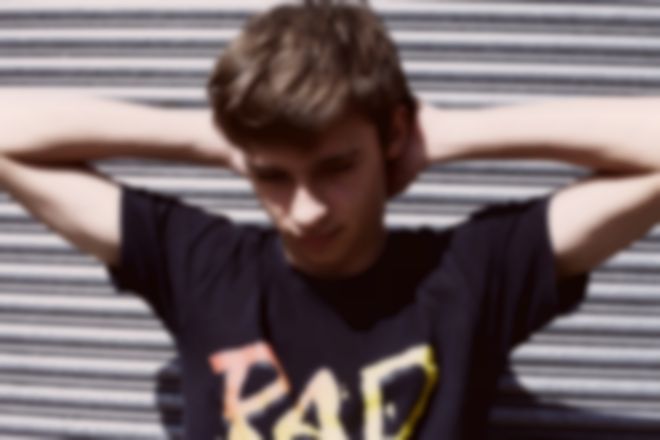 My first introduction to Flume was sitting in a bar in Brisbane, Australia at the BIGSOUND music conference, chatting to two guys at the table opposite. “Flume – he’s gonna be Australia’s biggest export next year,” they informed me with absolute certainty. I’d like to pretend that I replied with something witty, “What, bigger than Neighbours?”, but in reality I just took myself to the venue he was playing that night, and I wasn’t disappointed.

Flume is Harley Streten, a now twenty-one year old from Sydney who makes the kind of Gold Panda meets gold pop music that’s gained him a million plus plays on Soundcloud and an ever–growing, ravenous fan base down under. But how does he feel about having his art labelled as export?

“It makes sense to me,” he replies as matter of fact, from the other side of the world through a Skype screen window. “With how it works over here, being so far away from everything, it doesn’t really sound strange to me. I guess it’s because people here – because we don’t have as many big things going on, especially in the electronic music world whereas somewhere like the UK – we all look for a flagship electronic artist to represent Australia, so it’s cool from that perspective. We’re sending someone from our home territory off into the world, so something like biggest export is kind of nice.”

Looking back a few years, with the explosion of Modular People it seemed that electronic-pop Aussies were everywhere, but having only just turned 21, it’s not a scene that Flume has grown from. Instead he aligns himself with a new wave of producers. “These days, what I’m seeing a lot from Australia, promising stuff, there’s a huge beatsy scene brewing, more like down tempo stuff. Have you heard of a guy called Chet Faker? There’s kind of a wave of dudes like him and Hermitude who are doing hip-hop or less dancey sounds. There does seem to be a wave of young producers coming up.”

Chet Faker, probably best known in the UK for his cover of Blackstreet’s No Diggity, also features on the track ‘Left Alone’, a forthcoming single from Flume’s debut record which sees the producer collaborating with two more vocalists, both given freedom on the track by Steten, “I always say to vocalists is, this is your thing, this is what you’re good at, this is why I’m working with you – you’ve got all this talent so I really want you to be as creative as possible and just send over a whole bunch of ideas.”

Flume’s debut is a lesson in modernity, first reaching audiences online, his album was for the most part created in headphones, on the road as he took a three-month trip around Europe with his portable studio, writing in cafes and hostels. “I wasn’t doing any gigs really,” he defends. “I did start doing a bit of DJing but I got really sick of it really quickly because it was all just about being a promoter, essentially.”

Hardly surprising when initial online reaction far outweighed the live arena. “It’s been a bit insane seeing all the, just the stats basically. It’s been a real crazy stat thing that’s happened to me. It’s been really exciting though, just waking up in the morning, checking the Soundcloud – oh right, cool. Got another x number of plays. And it’s always really exciting to see the Facebook jumping up. Yeah, it’s been a real online thing that’s happened to me.”

However the live sets have been catching up, with Streten getting his first boob flash at a recent show in Melbourne. “That was pretty awesome,” he grins. “Right now, it’s been absolutely mental. I’ve played like, a huge amount of shows around the country in the last few months and they’ve all been sold out, just kids going mental. What happens is, all the girls will get up the front at the start of the show, and the front row or two is just these girls, and then I’ll start playing the first song and about ten seconds in just all these dudes just crush them, and then in that instant it’s just sweaty dudes at the front.”

And it’s the perfect analogy for Flume’s music, a sea of beauty followed by a crushing blow, but open to all. And perhaps it’s this broad appeal that took his debut record to the top of the Australian charts, beating One Direction for the number one. “I beat them in the iTunes album sales,” he affirms. “I was beating them for about a week, which was pretty awesome. It was cool to see the energy that fed off it coz it’s a completely different beast to One Direction and to say something like that, all the people on Facebook and stuff, get really behind you when things like that happen.”

So does this make Flume bigger than One Direction? He declines to answer, before half-jokingly conceding, “Maybe in Australia.”