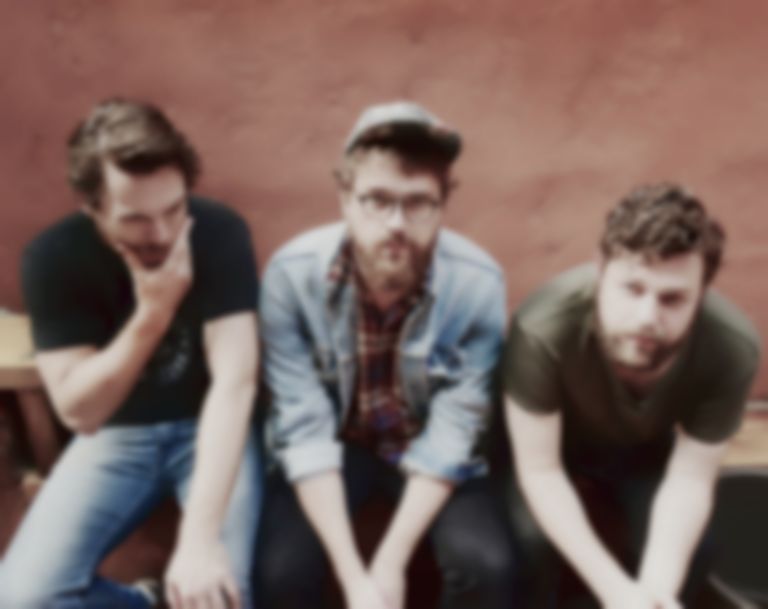 Years ago, if you asked Bear’s Den whether or not they would be headlinng their own tours, they may have entertained the notion but thought it was a goal that was far from their grasp. However fast forward to today, and the London-based folk trio has not only provided support for the likes of Of Monsters and Men and Mumford and Sons, who brought the guys to the O2 Arena, but also leading their own strings of shows throughout Europe and now across the Atlantic.

With a couple of EPs under their belts as well as a hit single, “Elysium”, and an album coming in the fall, guitarists Andrew Davie and Joey Haynes as well as drummer Kev Jones aren’t doing too shabby for themselves. We caught up with the guys before they played their first headlining show at the Bowery Ballroom in New York City. And in a sea of beer and a buffet of sandwich ingredients for them to nosh on, the band sat down with us to talk about their road to this point, how they’ve been able to make it out of the overflowing depths of the London music scene and how they feel about their success at this point.

Let’s start at the beginning. What were your first musical memories?

Kev Jones: Probably my dad playing piano when I was young.

Joey Haynes: It’s probably similar to Kev’s actually, but it’s my dad, not his dad, playing piano. I remember my mum and dad singing lullabies as well.

How did you all get together to become Bear’s Den?

Andrew: We all kind of met through friends of friends. There’s a huge number of people who were playing music in London seven or eight years ago when I was leaving school, and there were a lot of people who weren’t going to university and going through that stuff and were sort of hanging around and going to bars and playing together in bands and putting their mates in bands. Just a lot of creative people around. And all the while, Joey was studying music in Liverpool. And after all sorts of bands and different projects, we all sort of met each other then we started something two or three years ago. And here we are.

What’s the meaning behind the band name?

Andrew: We were trying to go for something like a Where the Wild Things Are hideaway kind of place where a kid runs off to, and for us, there’s quite a lot of perspective from an younger person to an older person and a lot of storytelling in our music. It just made sense to us.

What drew you guys to the more singer-songwriter style of music?

Kev: I think a lot of music that we listen to has a lot of good lyrics, and we tend to learn towards that. Then the bands we’re friends with and know are like that as well, and they’re great.

Andrew: I think there’s been a lot of accidents where we don’t really go around and think we’re a guitar band or something. We’ve got a electric guitars on songs and now even horns on songs. Now it’s whatever the song wants. That’s how we make decisions.

Who are your influences?

Kev: The National and Bon Iver are big influences on this. Sufjan Stevens as well. We also have been listening to the War on Drugs. We think they’re really cool.

Let’s talk about “Elysium” since it’s becoming a big hit for you, especially in America. So what is the song about?

Andrew: It’s a song I wrote a long time ago, and I think I had quite a lot of religious friends growing up. And I got a feeling from a lot of them that they never really questioned it. That’s what they just thought. I asked them about it because I don’t have a problem of people believing in anything as long as you sort of question it and are thinking about it, I suppose. I think I felt disillusioned when I was younger, and I wished I didn’t feel like that. I think it was coming from that place.

Now onto the video. What was the premise behind the video? And after the shooting in Seattle Pacific University happened, which is where the video was set, how did you feel about the video then? And why did you move ahead with releasing that one instead of making a new one?

Andrew: I think with the music video, the idea came to use through a friend named [James] Marcus Haney, who wanted to go to his little brother’s university and film his final years and kind of try and capture those last moments of innocence and youth in him and his friends. He sent us photos of them, and they looked like a really cool group, really interesting. Then as the filming went on obviously the shooting occurred, and none of us thought the video would get finished. And Marcus told us, “This has happened, and I don’t think the video is going to happen anymore” kind of thing. And so at that point, it didn’t feel like, “Oh it’s not going to exist.” Then after a few days, they decided to continue filming the students of the university who appear in the video. And we didn’t think we were in a position that we should do this or we shouldn’t do this. They took overship of the material, and it doesn’t even feel like it’s our song now. The song part of it is not really what it’s about. I think Marcus made something incredible out of something really tragic. And that’s what’s really amazing about that. It never felt like we were making a contrived decision over the processes of making the video.

With the kind of music you guys play, people gravitate toward it because they can relate. So how much of the songs are based on personal experiences and how much are just made up?

Andrew: I don’t think I can put a percentage on it, but I think it’s vaguely truthful. It’s kind of hard for me to really tell. There are parts that are storytelling and elements that are really true and elements that are hidden and open-ended because it’s a bit much of people overexposing themselves. We’ve gotten into trouble of over-exposing ourselves in the past.

Music aside, what’s the worst job you ever had?

Kev: I used to work a 12-hour night shift at a trifle factory, and that was the worst thing ever.

Andrew: I’ve known Kev for eight years, and I didn’t know that. He’s literally done everything.

Kev: That was the worst. There would be a klaxon that would go off, which mean I could take my hair net off and smoke some fags. This was like at 4am, and I had to take sponges like this and put them in the little container.

Andrew: You wore a hair net? [Everyone laughs.]

Joey: I worked as a house painter one summer in a really posh neighbourhood, but the houses would be locked, so whenever I nature called, I had to run around and knock on random rich people’s door with an increasingly pained and desperate expression on my face.

Andrew: I worked on a building site, but I quite enjoyed it. I would just hide all the time. I would just do a lot of sweeping, but it wasn’t that bad. I worked as a personal assistant to a dietician, and that was kind of a boring. She was nice though.

There are so many bands starting up in London every day so it would be easy to think that there is competition, but Andrew, you mentioned that you all made lots of friends with other bands. So how’s it being a band in that kind of environment and trying to stand out from the rest?

Andrew: I think we’ve been really lucky. We recorded an EP, and we didn’t have much lined up after that. Then there was a band that took us on tour. And if they hadn’t done that, it’s like, “What would have happened?” You need little bits of luck, and you need these things to happen. We actually met Marcus who’s playing [horns] with us now. We didn’t meet him through that, but the Mariner’s Childen toured with us, which is Marcus’ other band. You just have to create a vibe where you can just tour with each other or help each other. That’s what it’s all about. We’ve been so lucky to have people to do for us that we try to do it, too. So don’t be too cool for school because…

Andrew: Yes, you can learn a lot in there.

You’re now touring America and playing all these different gigs and festivals. How does it feel now that you’re no longer just playing at the local pubs anymore?

Andrew: It feels really good. It’s also fast and also busy. You don’t get to take stock of it too much. You just get a sheet of paper or on your phone a list of things you need to do and just have to be there for. But there are moments on tour where you have to pinch yourself and go, “I can’t believe this is happening.” Yesterday, we were in Electric Lady Studios and tonight we’re playing Bowery Ballroom. I remember friends’ bands playing this place, and it’s so cool. I would never get to play there, but now… We’re very, very lucky, and sometimes you forget because you’re so busy to take it all in.

Last question, can each of you tell me your definition of success?

Joey: To be able to buy your own football club.

Kev: Didn’t somebody say if you wake up in the morning, and the guy gets to do what he wants to do every day is a successful man. That’s what I think.

Joey: That’s why I want to buy a football club.

Bear’s Den’s new single, “Above The Clouds of Pompeii”, is released on 13 October, ahead of their debut album, Islands, on 20 October. Both are released on Communion.