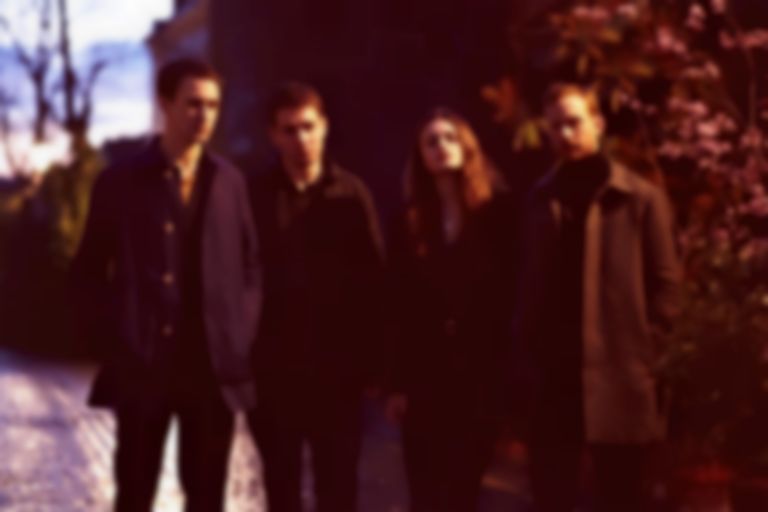 Arthur Beatrice, who, if made human, is presumably the bewanged doppelgänger of namesake and Golden Girl Beatrice Arthur, are an exciting prospect. They exist almost in the same corner of the musical world as bands like London Grammar and The xx, but instead of slathered in echoes and 4am pixie dust, they mine a rawer vein based on the natural(-er) timbres of the standard rock setup.

There’s still an ethereal sparseness, and the vocals are tinged with an unequivocal despair, but instead of the silent gaps being polyfilla-ed with midnight synth pads, they’re often just left silent, which gives a robustly different texture. It’s not always the case, but that tends to be what sets them apart from the oft-linked acts. In all honesty, it’s pretty difficult to squish them into a singular pigeonhole – although they break bread with the same aura as skeletal indie acts, they also yoink strands of disco, dance and ’80s pop.

Take “Midland”, for example. It’s piled high with Top 40 titbits, including post-disco beats in the chorus, soaring vocal hooks and woozy axe licks, drenched in reverb. Ivory-tinkler and lead vocalist (one of them anyway) Ella Girardot helms the cut, a swooning, elegant gambit which skirts the baroque and the funky. It’s still the earliest of days, but picture this: you’re at one of the summer’s grand jamborees. There’s a thoroughly terrible headliner swanning around the main stage; you slink, intoxicated, into one of the smaller, emptier tents upon hearing fragments of dulcet noise. Guess who? Arthur Beatrice, that’s who. Suddenly, the chorus to “Midland” drops, full of pirouetting strobes and blue haze – every bloody soul there goes berserk in awe. Now, that may be entirely unrepresentative of their festival sets, but it sounds rad, right? Short story: “Midland”‘s a banger.

However you choose to define their sound, most will probably agree that there’s a grave tone over the top, a serious streak that prevents flippancy and wacky antics. Something you probably wouldn’t glean from them, then, is that they can be a pretty excitable bunch. We call them up for a chat about their upcoming debut LP, Working Out. Orlando (Sheppard, guitarist and other lead vocalist) answers, and briskly puts us on speakerphone. There are voices. Voices everywhere – and, handily, indistinguishable from each other (except Ella), to a complete stranger. Fortunately, they’re a cheery clan with what seems like an IV of Red Bull plugged into their arms.

(In hindsight, asking for names would’ve been wise.)

So you’ve been a band for a while now, but how did you form in the beginning?

We were all at school together. We’ve been playing since we were like fourteen. Orlando and Elliot were in music class together and I joined later . It’s been going a number of years, but we only started take it seriously when we moved to London.

What was the first song you wrote together like?

Terrible! We were convinced it would be in the charts but… no… definitely not…” [The band descend into a fit of giggles.] It took a lot of time to settle of a sound. Lots of copying-other-artists phases early on to find out what was natural before we found our own sound. We wrote some stuff that was like epic rock with Bloc Party drums in it!”

What’s changed since then?

The amount of time together, mostly… and growing up listening to different music but realising that we all agreed on a certain sound we wanted to make without being about to define it. That still happens now.

There’s a maturity. We can refine it so it feels like… there was something before that didn’t feel ‘connected’… working with the same people for so long allowed us to find a cohesive sound.

What would you tell your past selves if you could go back?

Keep on! You’re in for a long ride!

How did you come up with your musical style?

It wasn’t spontaneous. It took a lot of work, and it was a very gradual process…we wrote a lot and it wasn’t quite right. It definitely took a long time to figure out.

“We were fairly inexperienced to start with. We’d recorded a bit, and played a bit, and I guess because we do the production ourselves it took a long time to figure out how to do that too, but it took time to arrive at where we are now.”

If you had to describe it to someone who’s never heard of you before, what would you say?

Blissful pop music! We always know we wanted it to be in the realms of pop. We respect old pop like Bowie and feel like pop’s a nasty word, with connotations to Rihanna and Lady Gaga, but I feel like bands like us should aspire to be pop music.”

I got into Jazz and R&B. That sort’ve thing influenced the vocals. A lot of the artists we’re all into now we didn’t know when we started out, Talk Talk and Talking Heads. We were writing before we got into those, and after someone would go: “Oh, you sound like Prefab Sprout,” we’d listen to them and we’d go oh yeah that’s cool, we can hear that.”

A bit of a watershed for me was hearing Wild Beasts. I realised you could be a guitar band and do stuff differently from the lad rock of the time (which I loved). It was a shock. They’ve got the whole classical thing going on. Maybe there’s a similarity?

How come it’s taken three/four years for the record to see the light of day?

It’s more like 10! We’ve had demos knocking around for ages, and those got written about early on but we didn’t want to release the album then. We didn’t want to bow to that pressure of releasing something. We were lucky our label supported that and I don’t think it’d be the same record if we’d brought it out any earlier.

Very long. Writing took a number of years. “Midland” is the oldest track, written a long time ago, almost two years ago…more than two years ago!

We all heard it and got very excited. It was the first time we were unanimous about a sound. It took a long time to start writing cohesive stuff like that, and just bring everything to the same point. It didn’t help that we’d worked with lots of producers and we’d been trying stuff out and we’d never been satisfied. In the end we just produced it ourselves and things started to fall into place.

What’s been the most valuable lesson you’ve learned in the studio?

Don’t be precious and overwork stuff. Learning to let go and be objective is a hard skill to learn. One of the most problematic things was being a vocalist and having to record your own vocals.

Just to make sure we’re keeping an open mind.

Where did your new single “Midland” come from? Is there a story behind it?

It was interesting. The way we wrote initially was to come up with chords and melodies, and put words to that. “Midland” was the first time that we had lyrics before chords and everything else came around the words.

Can you describe your first ever show together for us?

It was when Hamish had just joined, and it was a proper high stakes performance. We had tracks on MySpace and got some emails from a label and some managers; it was ludicrously exciting. It took place in a small room in the Stag’s Head in Hoxton. It must have gone okay as we still have a manager. That was the first show in the current format. We’ve been playing for years though.

Have things got bigger since then? Do you use any set design elements at all?

We’d love to do that!

We used a lighting guy once… but the stage was too small, and it was summer, and in the basement of the Borderline. It was so hot and sweaty. Someone died a few weeks later there from heatstroke…

Design is a big part of our output, and we have a lot of control over packaging and our website. I think it’s about taking it slow and putting music first, and progressing naturally rather than coming out with some huge dance show where we all wear wireless mics…We’d need money first!

Any other plans for 2014 other than the obvious album release?

We’re touring the US – it’ll be first time playing a show there. We’re doing a top-to-bottom thing from New York to SXSW at the end.

We’re already working on new stuff. Not sure if anything will be released… but maybe a few EPs before the next album, I hope…we’re not gonna commit to that though!”

Working Out is out 24 February via Polydor.