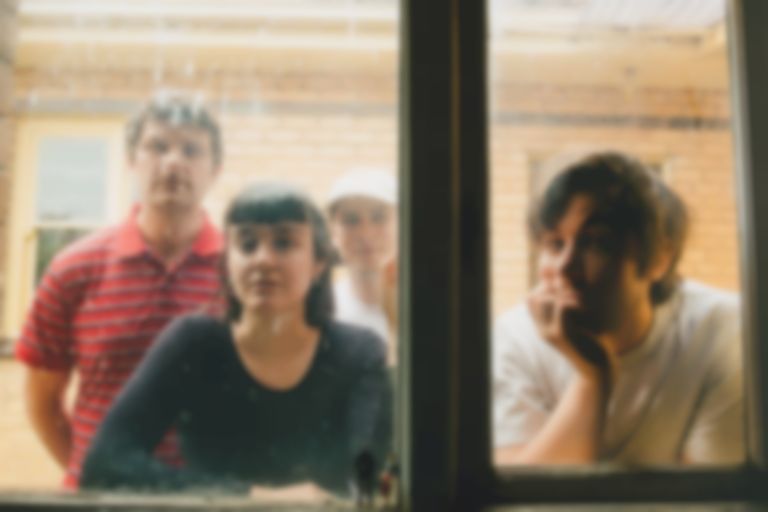 “Cellophane Car” is the first single from the Melbourne quartet The Stroppies' second record, Whoosh.

At first glance, it may seem like The Stroppies’ Gus Lord is intentionally playing down their new album when he describes its title, Whoosh, as “a silly word”. He clarifies his opinion when he explains how the “absurd and transient” are fundamental in the making of good pop music, but it’s still hard to qualify. Particularly from a band called, well, The Stroppies. That is, until you listen to “Cellophane Car”.

A sprawling adventure of Flying Nun-esque jangly guitars and cute vocal interplay, tied to a melody that plays like a psychedelic wedding procession, it is the perfect expression of Lord’s words in music. Similar to the winding road journey shown in the video, it jovially invites listeners to get lost in the simple beauty of its sound: impressive in its sense of freedom, though bringing people back to the perpetual melody underpinning it all.

Sincere in its execution, but charmingly silly in its nuances (the jauntiness to the underlying melody and the fact that the video runs backwards), “Cellophane Car” is all the proof Lord needs of the value to absurdity in good pop music.

Lord says of the album: “Whoosh is a silly word. There is something completely nonsense about it, especially when removed from any kind of context. For me it conjures up images of something absurd and transient - two things fundamental in the experience of listening to or making good pop music.”

“Cellophane Car” is out now, and Whoosh is due out on 1st March via Tough Love Records. Check out The Stroppies' Facebook for their UK tour dates this summer, including 18 July at The Lexington.