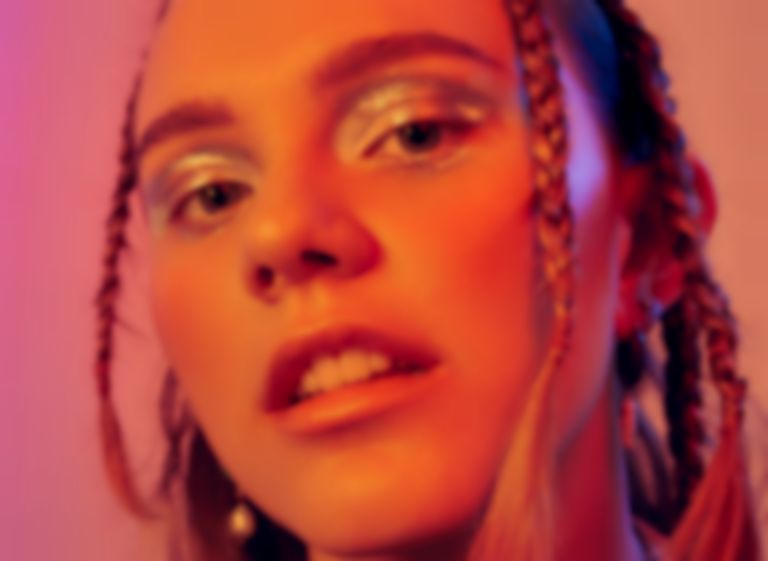 Sycco (aka Sasha McLeod) came to London for family but stayed for the music. When it was time to return home to Brisbane she dragged her heels until the eleventh hour, laying down ideas in the studio while her suitcase went unpacked. The year was 2020, the chaos was yet to descend, but even before stepping on the plane, she found herself overcome by that inexplicable feeling of loss that comes hand-in-hand with long-haul travel.

As it turned out, this would be a long goodbye, but "Jinx" is an attempt to bottle that bittersweet feeling; a kind of placeholder until she could finally return to the city that had become like a second home.

Tapping into the melancholy, the video features a wraith-like Sycco clasping a bouquet of drooping lilies, her face shrouded in fabric as shadows flicker around her. She's also lying on some kind of mattress/coffin contraption, as if in mourning for the opportunities being left behind in her wake.

But for all its funereal overtones, "Jinx" feels more rebirth than requiem, marking a shift from the blissed-out psychedelia of her previous work and ratcheting up the tempo several notches. There's a guttural bassline and a huge life-affirming chorus, along with crisp percussion that pays homage, appropriately enough, to the sounds of textbook UK garage.

A diehard Tame Impala fan, Sycco got the seal of approval from the band themselves when they selected her to support them on tour – so don't expect her to ditch the reverb any time soon. But with "Jinx", you hear an artist approaching new peaks of experimentation, taking cues from different genres and making them her own.

For Sycco, however, "Jinx" isn't simply a feelgood bop. “I was in my Charli XCX praise phase," she explains "and in my feelings about leaving my UK family the next day, so I wanted to create something dark, melancholic, sad and quite stressful – I think the production reflects this, as well as the lyrics.”

But out of darkness cometh her catchiest song yet. Although she's stockpiled considerable acclaim since those heady pre-pandemic days, "Jinx" lingers on as a snapshot of the artist as a teenager, daydreaming about the streets of London and counting the minutes until she could get back there and pick up her creative thread. As souvenirs of Britain go, it beats a stick of rock.

"Jinx" is out now via Future Classic. Find Sycco on Instagram.