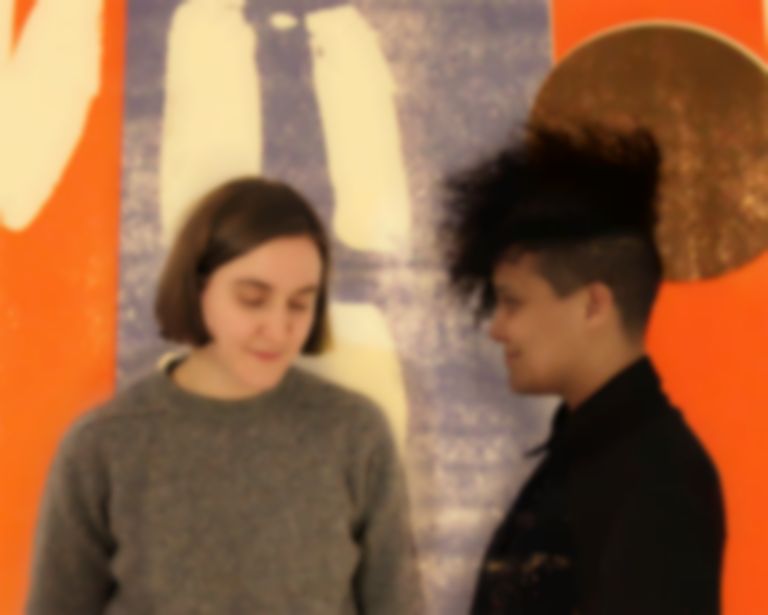 Having their two members split between Glasgow and London doesn't seem to stop Sacred Paws making excellent pop music if new single "Everyday" is anything to go by.

Rachel Aggs (bass,guitar dubs and member of Trash Kit and Shopping) and Eilidh Rodgers (drums, Golden Grrrls) released their debut EP Six Songs last year and have quickly followed up that blast of fun with another raucous and layered Afropop jam.

"Everyday" crackles with energy from the off; Rodgers' drumming is simple yet dotted with complex rhythms, while Aggs adds scratchy and brightly bouncing riffs which dance around the percussion. There's a joy to the instrumentation and the half-chanted, half-sung vocals but as with so many pop songs which appear to be without a care in the world, if you scratch the surface you catch lines like "sometimes I fall apart" and find there's a real emotional resonance to lyrics touching on the confusion we find in a relationship starting to head south.

We caught up with the London-based member, Rachel Aggs, to find out a little more about Sacred Paws...

Hi Rachel, so how does the writing process work when the two of you live in different cities?

We just write every time we have a show, one of us will travel up a day or two early and we will practice and write. It's nice, it means we are pretty much constantly writing new stuff.

Do you ever write alone?

Nope! I have written one or two songs without Eilidh but I generally find it really hard to come up with stuff when we aren't in the same room. I feel like when I write on my own it tends to sound more reflective and introverted - which I'm sure is interesting, but I usually find those songs embarrassing and it’s way more fun to write when Eilidh is there.

Does it affect the sound of the band?

There's a kind of conversation going on between drums and the guitar, I think it adds an energy that means we can both get really excited about the song. Eilidh also often adds vocal melodies that are totally inspiring and surprising to me. I think having limited time makes us very selective, if we're both not feeling a tune then it gets pretty instantly dropped. It's possibly a weird way of working but it suits us, we're both pretty hyperactive people.

How do you feel the sound of Sacred Paws has changed or developed since the Six Songs EP?

When we recorded the EP it was the most time I've ever spent in the studio working on songs - even though there were only six tracks! We recorded it at the Castle Of Doom in Glasgow and it felt like a real luxury to be in such a nice space with enough time even to add a few guitar overdubs. This time we knew we wanted to take full advantage of our studio time and add loads of fun stuff to the songs like bass and synth and even some brass! I don't think they sound radically different though, we were just able realise more of the excitement we feel when we play the songs live and translate that into a recorded thing.

What can you tell us about this new track?

It's a sort of break up song / love song. We wanted it to sound joyous without being too annoying. We want to make uplifting pop songs that hopefully still have the kind of bittersweet edge that we both enjoy. The video was made by our friend Roxanne from Veronica Falls - she is one of our favourite songwriters ever!

"Everyday" is released as a 7 inch and download - alongside another new song "Rest" - on 21 October via Rock Action Records.