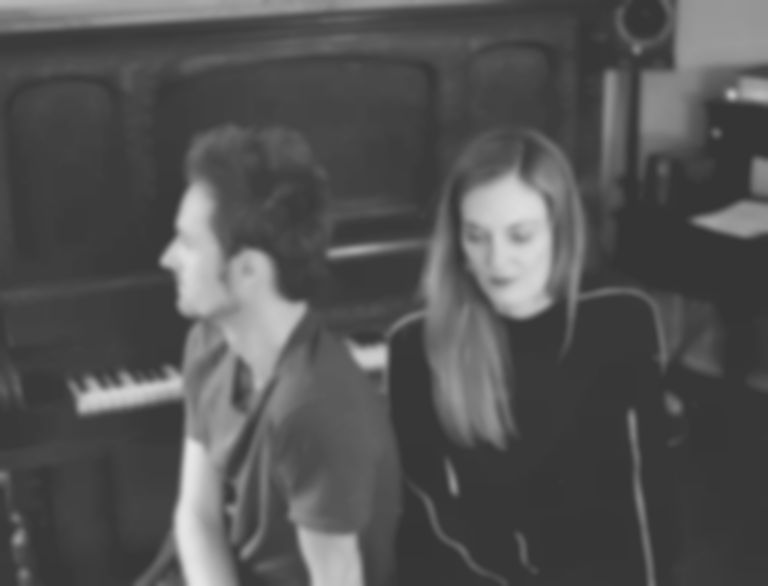 The album, titled Particle Fields, is a stunning, cinematic release full of sprawling soundscapes and ambitious emotion. This new short film by Javiera Estrada captures the intense, visual nature of the new album.

"The Dream is a short experimental dance film exploring the world of dreams," reads a blurb for the film. "The ‘sleeping‘ woman is representative of humanitiy’s oblivious state of spiritual ignorance of what is truly real, awakening the spirit where Magic dwells."

How did the collaboration with filmmaker Javiera Estrada come about?

Savannah Jo Lack: That was a happy timing thing. Robert and I were working on Particle Fields and were close to completing the album when a mutual friend of Robert and Javiera’s linked them up. Javiera had made this beautiful film and wanted to find the right music to bring the choreography and the concept to life. Because the film called for something more orchestral, Robert and I decided to compose the score together.

Was this short the actual catalyst for writing Particle Fields?

Savannah: The film was more a happy accident of timing than the catalyst for the writing of Particle Fields. We approached the score really wanting to serve the choreography and the emotion that the dancers brought to the film. The music ended up fitting really well with the rest of what we had composed for Particle Fields, so with Javiera’s blessing, we added it to the album.

The record sounds like a full soundtrack, was this intentional?

S: I think we both consider it the soundtrack to an imaginary film! It wasn’t intentional and I don’t think we realized until we had finished the album how much it sounded like a soundtrack. We approached the writing of these songs in an exploratory fashion, searching to see how our sounds fit together.

Did you have proper scenes in mind, when you were writing it?

S: I almost always have landscapes or emotional worlds in mind when I am writing, how about you, Robert?

Robert Koch: Definitely landscapes. It was less narrative what I had in mind but more visual: big open landscapes as a backdrop for a possible plot. Also long driving scenes like in the movie brown bunny come to mind with some of the songs, maybe night drives. And I feel a slightly mysterious, sci-fi element connected to the music as well.

Can you give me an example of a couple?

S: "Hideaway" had a very specific feeling for me - the feeling you can have in nature before a big storm, when the ocean goes flat and the birds stop singing and it feels like every living thing is holding its breath.

Robert: "Silver and Wood", which almost feels like a fantasy movie to me... aerial shots of travelers on an empty plain.

This was written in L.A., correct?

S: Yes, mostly in my little studio in Silverlake.

How much affect did the city have on the writing?

R: L.A. is a very conducive environment to write music, with all the escape options nearby, like Joshua Tree or the coast. I love creating there. Berlin didn’t inspire me any more after 13 years of living there. I just resonate more with L.A. right now. I certainly still got love for Berlin but L.A. is the city I feel more drawn to creatively and energetically at this point in my life.

S: I think the vastness of L.A., and the feeling of possibility that exists here, influenced the album. Also, growing up in Australia and experiencing the raw and epic beauty of the landscapes there will always influence everything I do, even if I’m not there.

What is the best way to listen to this record?

S: On a road trip in the rain.

What are your all time favorite film scores?

S: Tough question! I tend to be drawn to spacious scores. Ry Cooder’s score for Paris, Texas, Jonny Greenwood’s painfully amazing score for There Will Be Blood, and, most recently, Antonio Sanchez’s score for Birdman.

S: More music! I’ll be releasing five solo pieces for violin and technology before the end of the year.

R: I'm working the music for a TV show, as well as co-writing and producing for other artists here in L.A. and back in Berlin. I'm getting ready to compile some ideas for the next Robot Koch album. Savannah and I will present our album live next year too, our booking agents are working on some festival shows right now!

Particle Fields is out now via Trees&Cyborgs.