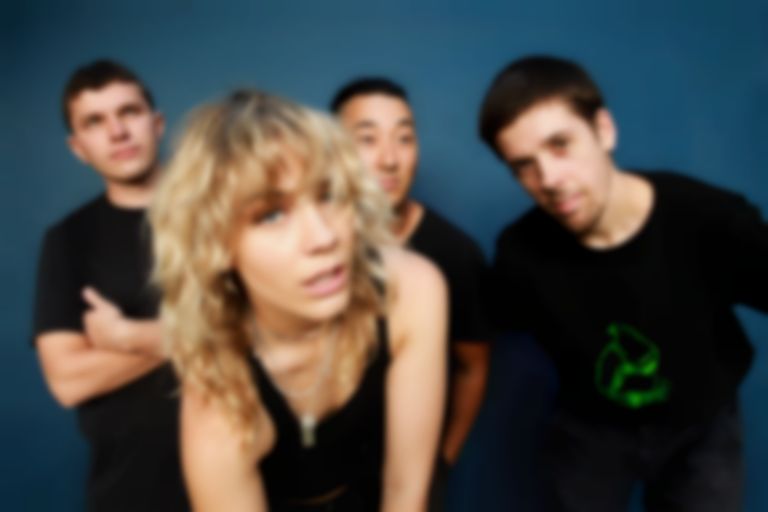 Frenchkiss signees Miss June come crashing back with their heaviest outing yet, the searing “Enemies”.

Tackling pertinent societal issues such as gender imbalances and capitalist failings amidst a maelstrom of distortion and furious drum beats, you’d be forgiven upon first hearing Miss June to assume they call the same DIY spaces home as Priests and Gauche.

Warning: there are flashing images in the following video.

It isn’t just the articulate frustrations and angst of vocalist and guitarist Annabel Liddell, but the intense precision of the rest of the band, all of whom met while attending music school in Auckland. 2015’s Matriarchy EP in particular positioned Miss June as an act existing, if not physically at least in spirit, within this space, and marked them out as a particularly potent force to be reckoned with.

While tracks “Twitch” and “Best Girl” have since seen the band develop a greater penchant for a hook than on that initial EP, “Enemies” operates on a significantly heavier level than anything previously. Liddell is in prime form, destabilising not just in her performance but her lyrics also, flitting as she does from reliant (“If you see me don’t let me go”) to a sense of disregard (“Oops I broke your heart again”). There's also a palpable increase in the tension from her bandmates, whether it be the dirty, ragged guitar riffs or thudding, agitated drums, creating an impression bigger and more forceful than any of their prior releases.

"This song is many things, a tribute to lost lovers, an anthem for lingering feelings, but above all a reminder that your enemy’s enemies are not your friends," says Liddell. "The video creates a dreamscape between two kids stuck in the conflict between hero and horror. Unknowingly we sympathise as we trace their steps in the night but ultimately are reminded that often we are our own worst enemy."

Coming in a year that has seen them play in the UK, Europe and the US as well as sign with New York’s Frenchkiss Records (Bloc Party, The Antlers), “Enemies” is a big step forward for Miss June and a determined signal of intent ahead of their debut.

“Enemies” is out now, and Miss June’s debut album Bad Luck Party is due out 6 September via Frenchkiss Records. Find Miss June on Facebook.