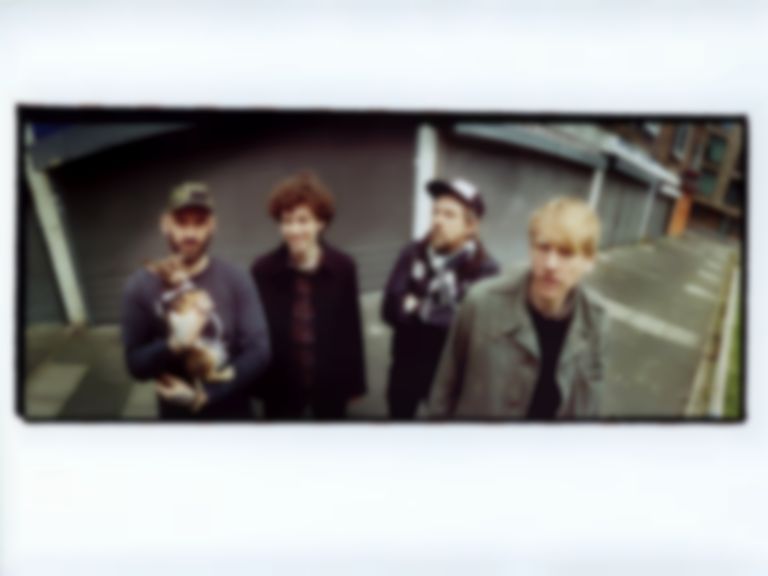 “County Pride” is a snarling, swirling attempt to overcome the frustrations of living in a small town from Adulkt Life: a collaboration including musicians from Huggy Bear and Male Bonding.

Adulkt Life was born from a chance meeting between Rowley and Webb at a Rough Trade store. Rowley hadn’t started a new band since the '90s when his former outfit Huggy Bear were prominent on the UK riot grrrl scene, but his meeting with Webb in a record store sparked mutual excitement at the possibility of creating music again. Now signed to What’s Your Rupture? and joined by Hendrick and Barrett, Adulkt Life are fully formed and ready to “flip out” rather than remain “flippant” about issues affecting society.

"Early in Adulkt Life songwriting we wanted to make a song like Devo - something herky jerky with a future disco swing for a party crowd - but we were all too angry,” explains Rowley. “[County Pride] is about the need to escape from hostile small-town awfulness and the weird ways you choose to get out. It’s a dark ride with sparky edges through small town/new town bid for blood...”

This need to escape has propelled Adulkt Life into frenzied, urgent action. Like the '90s riot grrrl scene that Rowley grew up and participated in, Adulkt Life want to “try and recapture the feelings not just in rediscovering music but all the other crucial elements that go alongside it, the passion to share and scrutinise and play poetically with brut force and argue.”

The band have also put together a series of fanzines that listeners can get their hands on by downloading “County Pride'' from their Bandcamp.

"County Pride" is out now via What's Your Rupture? Find Adulkt Life on Instagram.